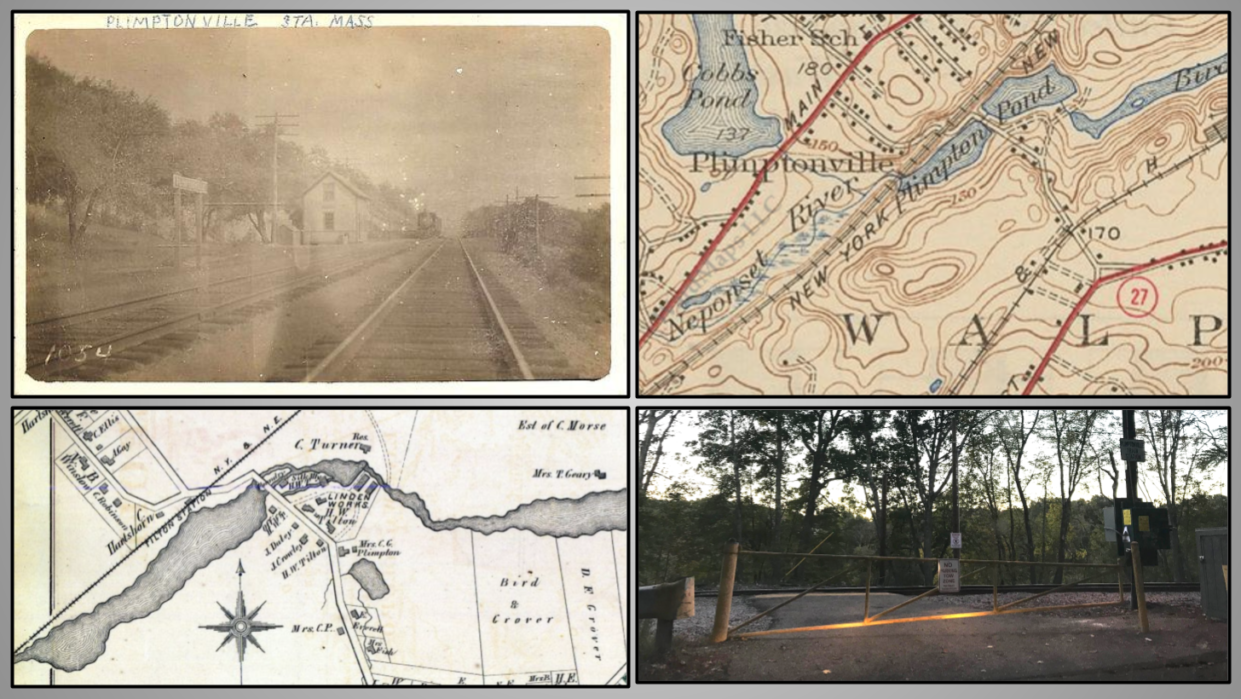 It’s an everyday struggle if you head inbound toward Boston from the least-used MBTA train station.

There’s only one commuter rail that heads that way on weekdays, and it leaves at 6:58 in the morning.

The platform consists of about 10 feet of pavement in a marsh on the bank of the Neponset River.

From the road, the Plimptonville station could pass for a DPW lot. Or any lot next to a cedar swamp backyard in any Massachusetts suburb.

It’s hardly mobbed with tourists; unless they want to work around the once-a-day-each-way schedule, those visiting attractions nearby such as Lewis Castle or the MCI-Cedar Junction maximum security prison have to drive.

It’s easy to miss the name of the station, which is printed on an aluminum street sign the size of a sheet pan. There’s no bench, no shelter, and no newspaper stand. Just a miniature placard hung with rusted bolts on a deteriorating telephone pole. There’s no car lot either, just a yellow steel barrier gate with a “No Parking Tow Zone” sign and a small patch of asphalt where the train stairs line up.

“Sometimes they miss it with the door,” says Tony Chen, a stalwart Plimptonville commuter for two years. He’s nice enough to answer a few questions before 7 am, just as the first sunlight flickers over the autumnal tree tops. “They usually are pretty good about it.”

In a system that covers hundreds of miles of tracks and serves hundreds of thousands of people a week in one of the 10 biggest suburban transit networks in the country, Plimptonville is the puniest pickup location of all. In 2005, according to MBTA records, the station serviced a mere three round trips a day. It’s less than a mile and a half as the crow flies to either of the two neighboring Franklin Line stops, Walpole Station and Windsor Gardens. Those two averaged more than 1,000 combined inbound riders a day in 2013.

I drove to Plimptonville one morning this fall, I think to find its reason for existing. Assuming there is one.

First built in the 1840s, what’s known today as the Franklin-Forge Park commuter rail line first ran from Dedham down the main streets of towns including Walpole, which was unpaved through the start of last century. The stretch was part of the long-since abandoned Norfolk County Railroad, and locomotives on the tracks hauled locally produced snuff, textiles, and twine to and from an industrial village run by Plimpton Iron Works. The Walpole company was owned and operated by George Arthur Plimpton; a third-generation iron magnate (and granddad of the late famed author and Paris Review co-founder George Plimpton), George Arthur was the kind of guy who got what he wanted. Like a train stop for his booming business.

Trade and commerce thrived along the Neponset, and in time residences grew from farm homes and company-owned boarding houses in the early 19th century into estates and gentleman farms by the late 1800s, according to Walpole’s Communitywide Historic Properties Survey. On Plimpton Street today, parts of an original iron fence still remain; otherwise, like so many other once great industries that fell to progress, the trade’s a memory.

There are no sidewalks along modern Plimpton Street, which snakes under the iron horse’s solid steel bridge then crosses the river to Route 1A on Main Street. It’s only four klicks east of the Walpole Mall off of I-95, but it is the middle of nowhere. The closest bus stop, for the 34 out of Forest Hills 16 miles away, would leave an aspiring commuter with a 20-minute walk to Washington and Short streets, granted they know their way down the wooded path.

Locals are defensive of their tiny station, and while there’s never any guarantee that privatized MBTA trains will stop there forever, they do have history on their side in a sense. According to the US Department of the Interior National Park Service, Plimptonville is cemented in the National Register of Historic Places through its connection to Walpole (formerly Union) Station. Drawing on the Rail Lines of Southern New England, a 1995 book by Ronald Dale Karr, a 2016 register document notes:

Construction of the Norfolk County Railroad (1847-1849), the first railroad through Walpole, included stops at Plimptonville (later Tiltonville, and now again Plimptonville), Walpole (the town center), and rural West Walpole. Service on the 26-mile line, which ran between Dedham and Blackstone, opened April 23, 1849.

The previously chartered Walpole Railroad Company had projected a seven-mile branch line, connecting Walpole with the Boston & Providence line at Dedham. This branch was not built, and the company merged with the Norfolk County Railroad. A connection to Boston, made at Dedham, opened in June 1850, giving Walpole its first through-service for commuters.

Under various agreements involving multiple railroads, this east-west line through Walpole eventually operated as a segment of a through route between Boston and New York, carrying both long-distance and commuter trains.

For the most part, it doesn’t look like very much has happened at the crossing through the years. Records show that in 1899, one Dugald Kelley, an agent at the Plimptonville station (yes, it apparently had actual agents back then) was struck and killed by an engine there. It’s been quiet ever since.

Today, there’s not even an MBTA map on the grounds. No bike rack, no indication that this train is even for commuters. According to the most recent available MBTA BlueBook of rider stats, a solid 13 daily inbound riders held down Plimptonville in 2014. By comparison, Walpole Center averaged 945 a day that same year, while the second least-trafficked stop in the whole MBTA matrix, Silver Hill on the Fitchburg Line, saw a steady 20 riders.

As I witnessed, a dedicated fellowship of round-trip commuters congregate at Plimptonville on workday mornings. There is genuine interaction among them, especially for people up this early and heading to nine-to-five jobs with an hour-or-less break for lunch. Some of them ride back together as well on the 5:02 pm out of South Station—the only weekday outbound train to Plimptonville. There’s no service at all on the weekends, naturally.

“We’re all wicked friendly here,” O’Rourke says. “We chat with each other every morning. I don’t see that with any other station because everyone is on their phones or listening to music.”

It’s such an insider’s club, in fact, that the MBTA doesn’t even bother listing Plimptonville on online timetables. To find arrival and departure times, you need the print schedule (or the PDF of it), which denotes the stop with either a purple “f” for flag stop, in which “passengers must tell the conductor that they wish to leave” and “passengers waiting to board must be visible on the platform for the train to stop,” or in blue letters, which means “the train may leave ahead of schedule at these stops.”

“If you miss the morning train,” Chen says, “you have to walk one and a half miles to the nearby stations.”

Mostly, though, they ride together.

“We hit a record high not too long ago,” he adds.

This article was produced by the Boston Institute for Nonprofit Journalism, and originally published in DigBoston.

Liked it? Take a second to support Nate Homan on Patreon!