The first zines can be traced back to the 1930s, when the Science Correspondence Club published “The Comet,” a science fiction zine that sparked a wave of zines dedicated to that genre. By the 1970s, a new community started using zines: the punk scene published zines like “Sniffin’ Glue” to cover emerging artists. The Riot Grrrl scene of the 1990s also covered music, but focused on empowering womxn artists and spearheading a feminist zine movement. Today, with the rise of digital media, it may seem like zines are on the way to their deathbeds. But that’s far from true. In Boston, the zine scene is more robust than ever. Embodying the DIY ethos, Boston artists and writers are making sure that zines that cover important topics, communicate experiences and feelings, and foster expression are being printed and read. Here are the top zines of 2018 to also keep an eye on for 2019.

Liz Bolduc first learned about zines in college while self-educating about feminism and the Riot Grrrl movement. They were motivated to create zines of their own as a form of self-expression. “I was happily involved in the punk music scene for a while but didn’t feel like I had a place to fully express myself like I wanted to. When I saw that zines were being made and printed and distributed based off of personal experiences, I knew I wanted to do that. I wanted to create a zine.” After a departure from drawing, Bolduc picked up some pencils and pens to figure out the types of zines to create. “I had no idea what it would consist of until I picked up some pencils and pens and started drawing again…Punk comics and zines just made perfect sense to me.”

Bolduc’s zines cover some challenging topics drawn from personal experiences. “All my work is autobiographical and the main focus is existentialism and mental illness/wellness. I draw comics and illustrate moments of my life and put them into print,” they said.

For 2019, expect a continuation of the series “It’ll Be Alright.” “Each issue of IBA will still have the reflective, existential comics and illustrations but probably won’t be classified as daily comics .” Bolduc is also working on a short comic story about their relationship with their mom. “That’s been a part of my life I have a hard time fully describing or drawing about but I would like to start small and produce something this coming year.”

Here are some zines (with descriptions provided by Liz Bolduc):

Aslan’s Ghost is Liz’s heart-wrenching response to losing their cat this summer. This comic goes through the moments of Liz’s life in the aftermath including reflecting on existential meaning and childhood memories, therapy sessions and grieving and coping alone and with the help of loved ones. A memoriam for Liz’s best friend and family member, Aslan. 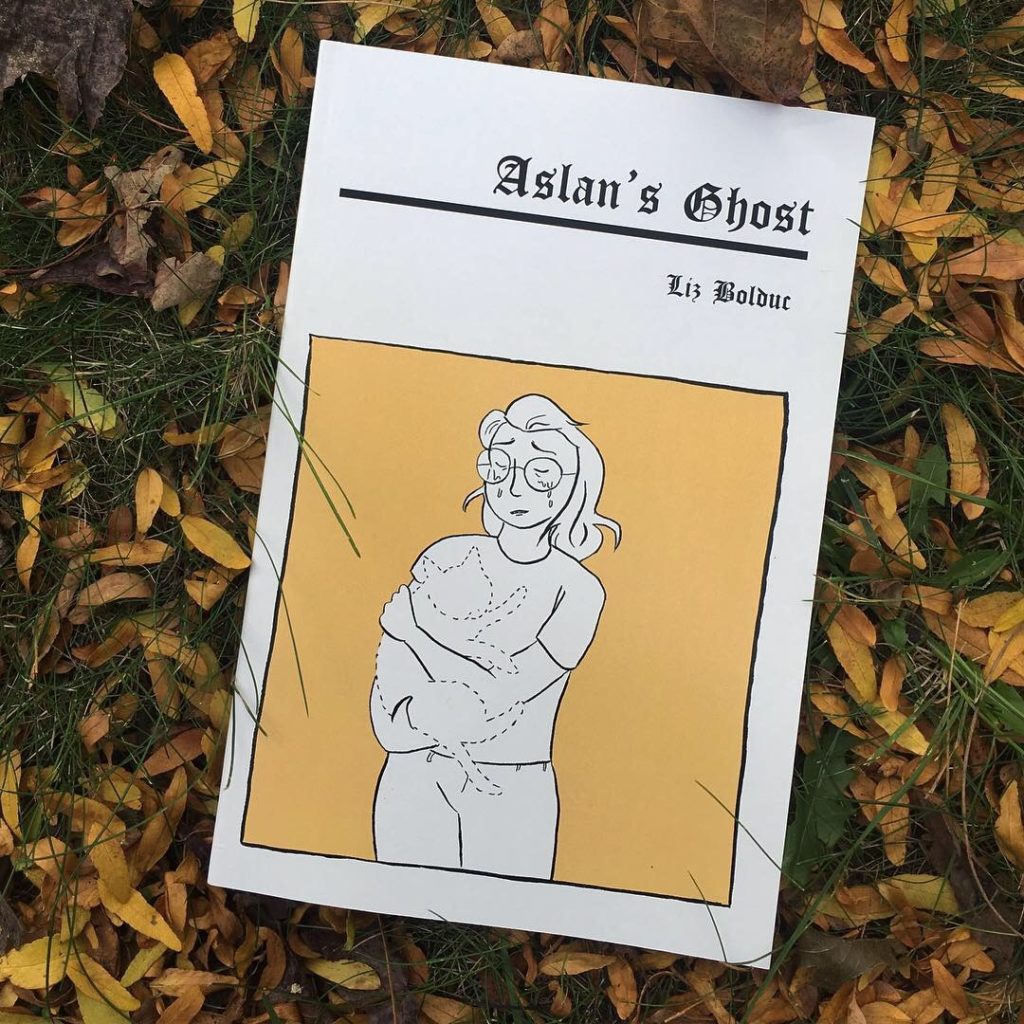 Continuing from 2017, Liz compiles daily comics into zines every month and reflects on different day-to-day events but also family memories. Comic stories include a near-death experience with Liz’s brother, reflecting on a strained father/child relationship and using therapy to process and find oneselves’ happiness. 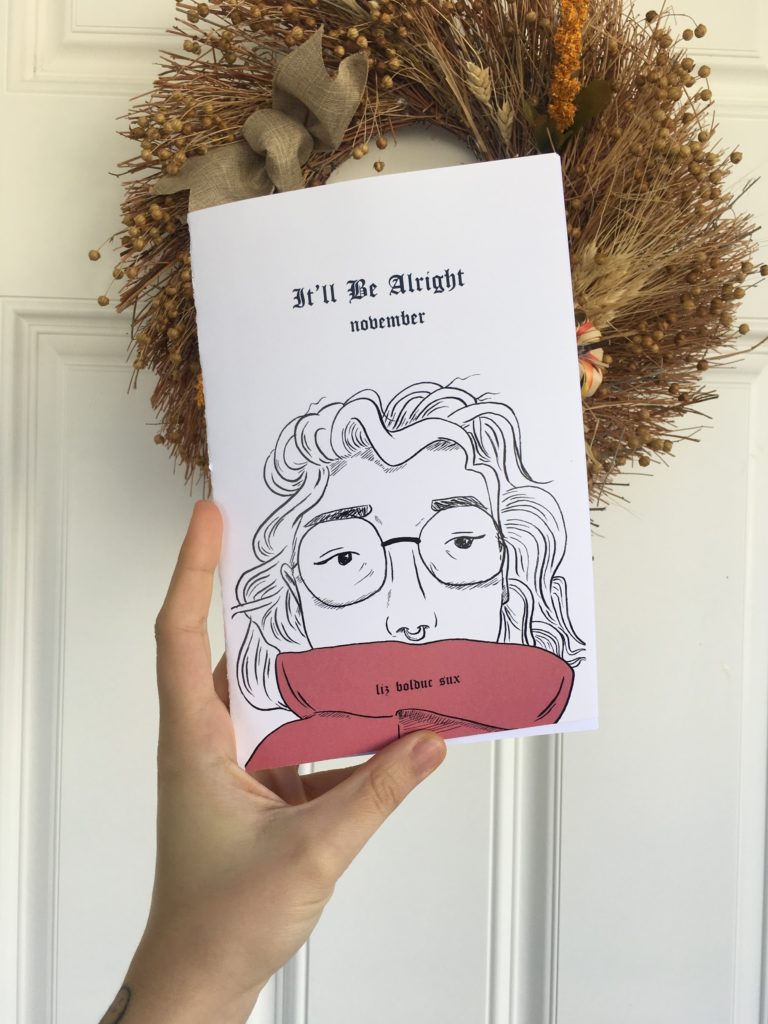 Pleasure Pie is a sex positive zine started by Nicole Mazzeo. Mazzeo said she’s always had a passion for making DIY magazines and booklets. “Even as an elementary school kid, before I had ever heard of zines, I was making magazines where I would interview my family’s pets and do exposés of everyday family happenings.” But it wasn’t until later that Mazzeo made zines about sexuality. “Then, I didn’t really make zines in my teenage years, and picked it up again when I was in my early 20s out of a desire to add to the conversation about sexuality and consent.”

The range of topics Pleasure Pie covers is vast: the zines cover sexual feelings and experiences, communication about sex, consent, relationships, and sexual shame. “I cover these topics because I feel like there is a need in our society to find better ways of talking about them. Oftentimes, sex education in schools is at best incomplete and confusing, and at worst shame-ridden and judgmental. And the ways that we talk about sex as adults are influenced by this lack of education and taboo around it,” Mazzeo said. “So I use my zines as a way to spark better, more honest, thoughtful, and inclusive conversations about sexuality.”

In 2019, Mazzeo is making a zine about penises that will also include an illustrated guide to penis art. “It’ll talk about the ways in which society underappreciates penises, how bigger doesn’t always equal better, and what people with penises can do to take charge of preventing accidental pregnancy when relevant…I’m really excited to create something that talks about penises in a way that is straightforward and positive, because I feel like most conversations about penises, even in liberal circles, tend to rub me the wrong way.”

Here are some zines (with descriptions provided by Nicole Mazzeo):

This is a zine about personal experiences with sexual assault and bad sex. My intention is to share these experiences and reflections openly, in hopes that true stories of sexual assault (and the emotional processing after a sexual assault) can be valuable in making sense of sexual assault, both on a personal level, and on a societal level. The zine also includes tips for supporting someone you know who has been sexually assaulted. 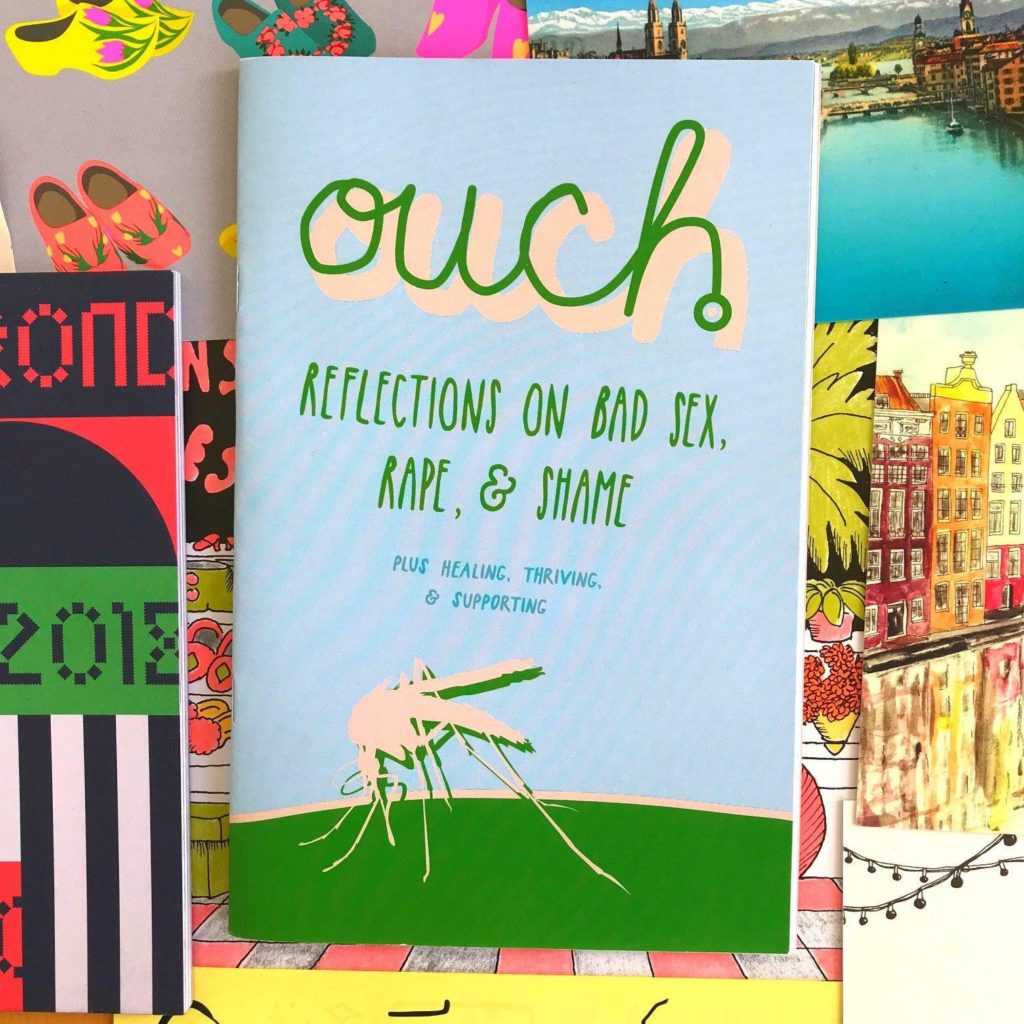 What I Wish I Could Tell My Teenage Self About Sex

This is a zine of real letters ordinary people have written to their teenage selves saying everything they wish they knew about sex (and bodies, gender, relationships, etc.) as a teenager. This zine includes my letter(!), as well as a bunch of other letters written by people of various genders. You’re likely to find something relatable, something heartbreaking, and something empowering. 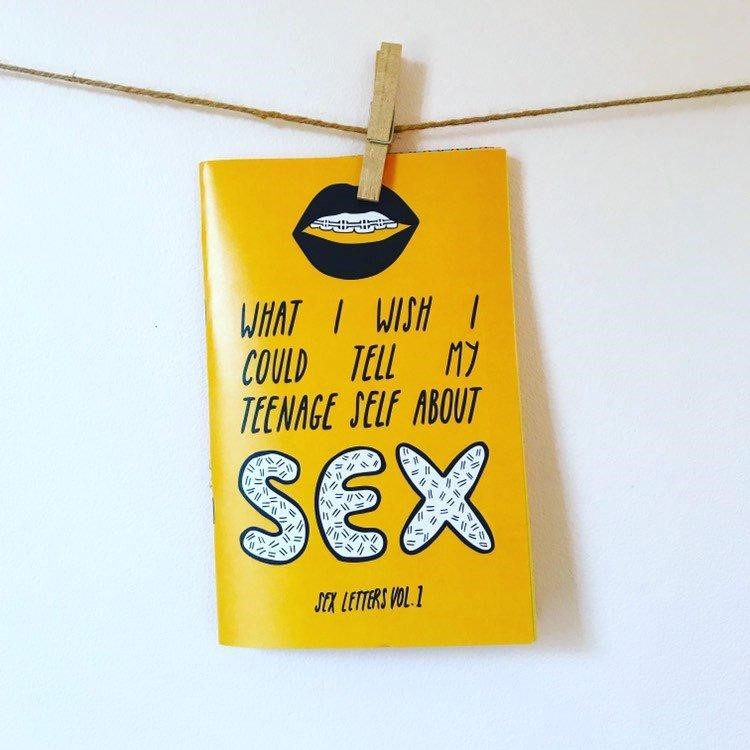 Launched in June 2018, Mooneaters was born out of a dining room table conversation. Crystal Bi Wegner and Ailin Lu, two of the founders, were talking about Asian Pacific Islander American queer culture in Boston. “We talked about how APIA queers need to hold that space for ourselves or else someone else might cast their own idea of what that means onto us,” Lu said. “Crystal was also talking to Lily at the same time about jumping onto this project.” The zines cover APIA femme identity, providing a space for expression and learning about that topic. “We talk about these issues because we wanted more platforms in Boston where we could cavort in our joys and woes,” Lu said. Mooneaters’ first two issues captured a wide range of topics. “The people who submitted had so many different things they wanted to say, it felt right to simply capture the organic dialogue that was bubbling up around our identity.”

With two issues under their belt, Mooneaters is releasing a third in early 2019, highlighting themes of transitions. “I think this is an incredibly pertinent theme that we can experience for example, as 1.5 generation immigrants, through the ways we come into our queerness via gender and/or sexual identity. There is so much artistic fertility in the space surrounding change, and we hope to be able to capture some of those thoughts in our next issue,” Lu said. As a contributor-driven zine, Mooneaters also hopes to facilitate discussion between contributors and get them together into one room.

Here are some zines (with descriptions provided by Ailin Lu):

Issues 1 and 2 (2 not pictured) have cover a variety of topics related to the experience of APIA captured in all types of printed media forms. Some examples include a map of the Korean diaspora, a piece on hair, photos of a live performance on the one child policy, how Asian fetishism is weird and gross, and an APIA bingo sheet. 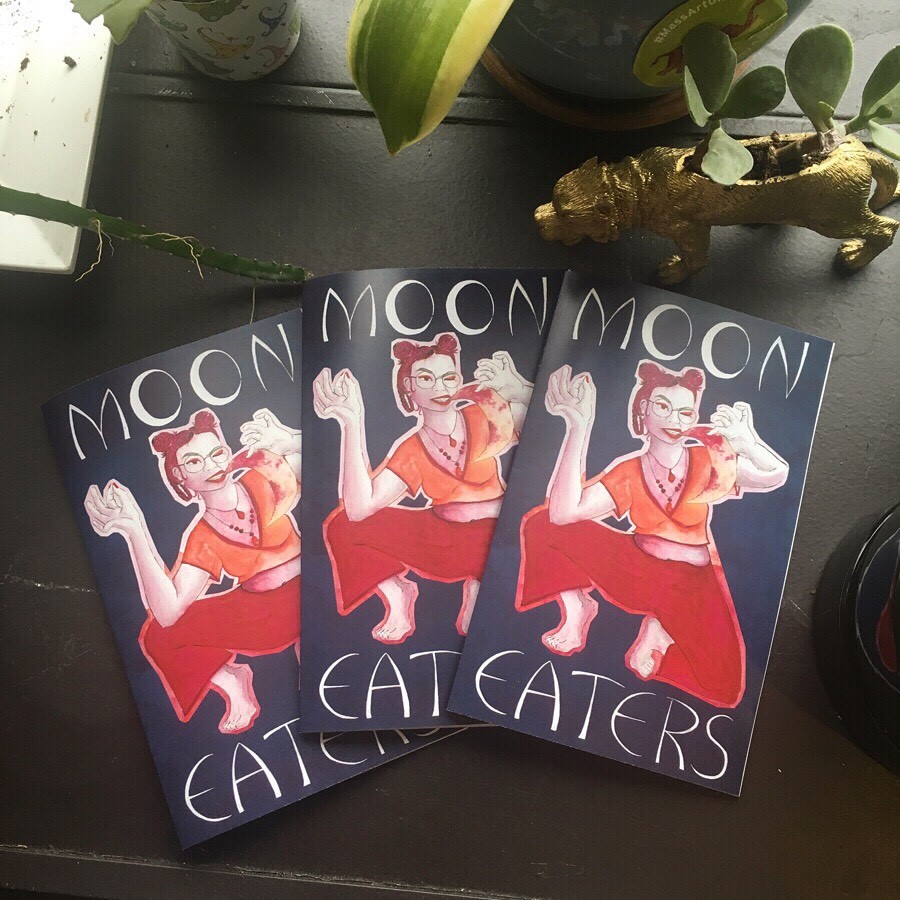 Property Zine is a quarterly zine that J. Bagist and Deb Step started in summer 2016. The zine is an open platform for artists to submit their work and also a showcase of the founders’ work.  Spring and fall issues feature the work of J. Bagist and Deb Step while summer and winter issues have open calls for art and writing.

Here is the Fall 2018 zine (with descriptions provided by J. Bagist and Deb Step): 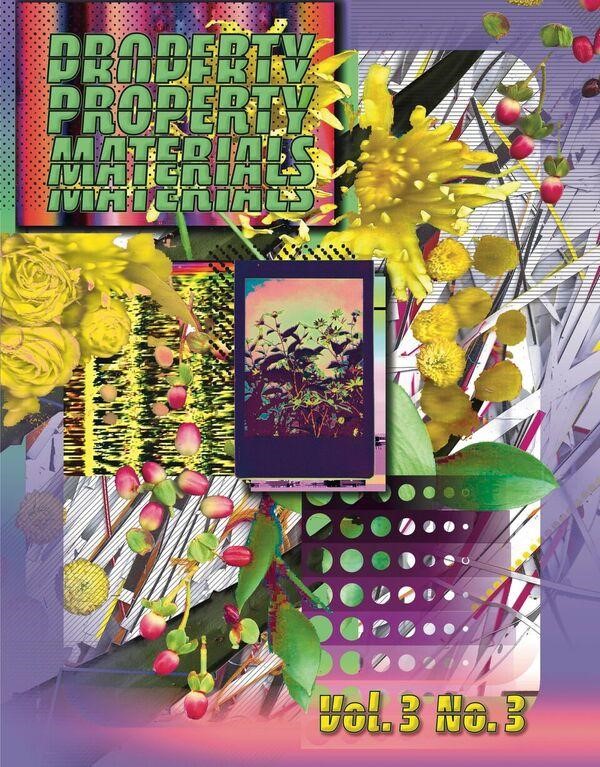 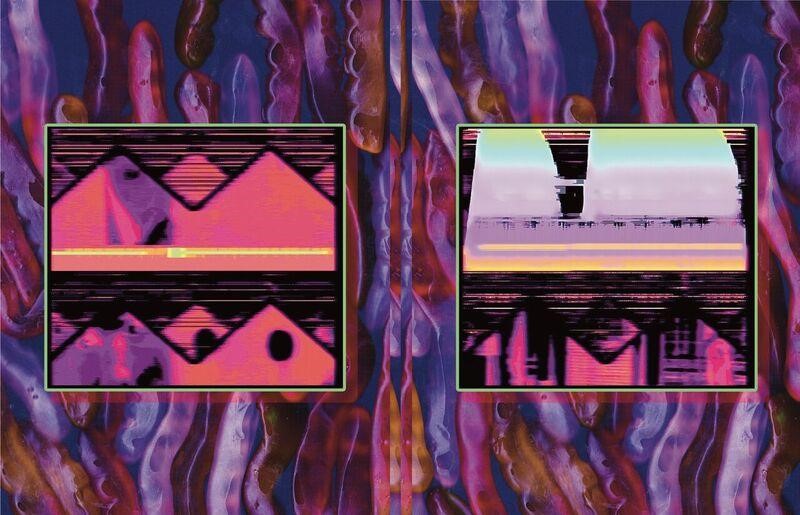 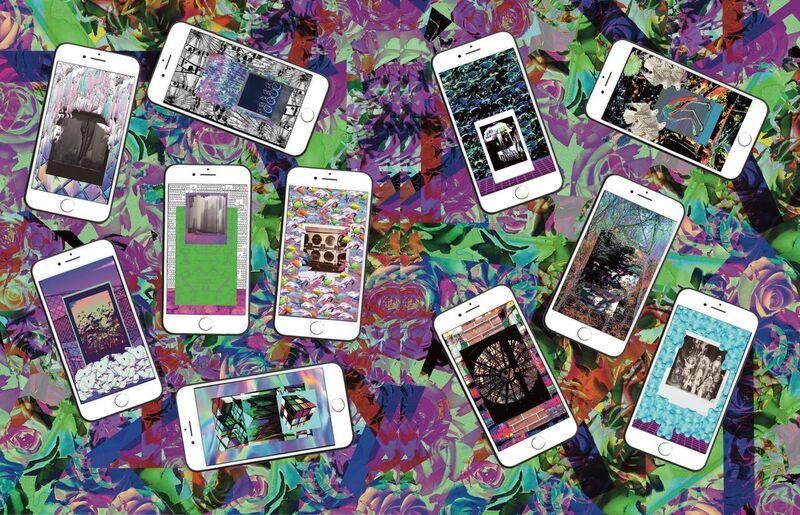 Read more of Olivia’s writing and see her photographs at her site HERE, or at the publications listed above, and hopefully here at the Hassle site more in 2019! – DS

Liked it? Take a second to support Olivia Deng on Patreon!