I have always had a hard time describing Robby Roadsteamer to people.

From “Heart of a Rhino” official music video.

Ergo, I also have a hard time describing Rob Potylo to people.

It’s sort of like that Hulk Hogan sex tape trial against Gawker,  where they had to try to differentiate between the penis of Terry Bollea and the penis of Hulk Hogan. Or maybe Robby Roadsteamer is the Fartman to Rob Potylo’s Howard Stern. Where does the character end and the person start?

Rob Potylo created the Robby Roadsteamer character, but the character is usually easier to describe than the person behind it. We will start there.

Robby Roadsteamer was a comedic musical act originally based out of the North Shore area. Roadsteamer (Potylo) played front man, hype man, and wrestling promo man in his act. He was backed up by a full band, including Nick D’Amico of Cocaine Tongue and Pete Tentindo of the Venus Mars Project. The shows were perhaps 30 percent Robby comedy bits and 60 percent music depending on the night. Robby would also do straight-up comedy acts in venues like the Hong Kong.

What was the music like? A sort of bizarro Andrew WK with cock rock tendencies and metal ballads (seeing Nick was in Cocaine Tongue made a lot of sense to me). You could hear some punk and hardcore influences in there, but I think that just might be a sound you can’t really shake if you’re from the North Shore. 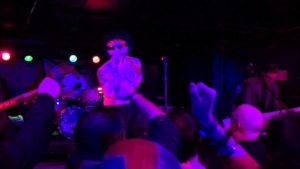 I’ve seen Robby and his band perform several times, most notably at Middle East Downstairs and The Paradise. I ended up ruining a lot of shirts at those Paradise shows. It was one of the few things I remember fondly from my late teens into very early 20s; taking the blue line into Boston, drinking shitty beer in student apartments around Northeastern, persuading others to go to see the Robby Roadsteamer show with us by exposing them to videos of him playing Shinobi, teaching the internet how to make General Gao’s chicken pizza, and expressing his hatred of Anthony Kedis.

Robby was a regular personality on WBCN. He was known for giving out his phone number on the air and then being asked to leave for the night, resulting in him drinking Zimas in the parking lot. Robby made the cover of the Phoenix. I watched him draw a dinosaur Tattoo on Gene Lavanchy’s arm on the FOX 25 Morning News. 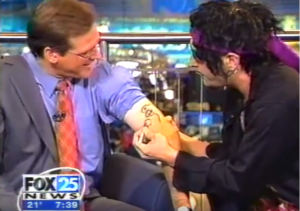 “Can we get an intern to zoom in on this? Earn your money! I will fight you!”

I showed this news clip to a friend out of state in another attempt to describe Robby. Her only response was: how did he get on network TV with his shirt off? Robby Roadsteamer did what he wanted wanted to do. He accomplished most of what he wanted to accomplish. In a way, Robby “made it.”

But he only made it as far as he could make it on the North Shore.

The North Shore is, (and as far as I know, always has been) short on music venues. There’s coffee shops and bars for local acoustic sets, and hollowed out restaurants for the occasional punk show, but for the most part we’re pretty barren over here. Robby would often go on rants about “living out your ironic 30’s in Allston” and how the “North Shore is where you’re gonna soar!” Robby loved Karl’s Sausage Kitchen, the Route 1 mini-golf dinosaur, and Revere beach. He did not want to have to leave his home to do what he wanted. He wanted to avoid working for “the man,” and the ultimate form of that “man” to him was relocating to New York or (even worse) Hollywood to make his money.

This type of martyrdom for your home is admirable, but it always comes at a price. Why fully support a place that only half supports you? 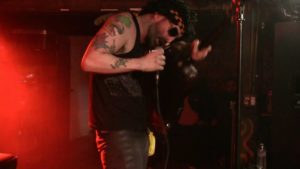 I think there was a lot of anger and frustration fueling Rob’s character. Robby was mad about the lack of music venues and comedy opportunities in his hometown.  He may have even been mad about the current culture surrounding him in the that era of the early 00’s. The music being played on WFNX, WBCN, and WAAF was something a lot of us drifted away from at that time. A common topic of some of Robby’s rants was how much everything sounded like The Killers to him nowadays. It’s not that any of that music was bad, but it all sounded the same to a crowd of people who thought they were getting old. Some of Robby’s notable hits were “Pee With Your Father,” “I Put a Baby in You,” and “I’m Sorry Your Cat Has Ass Cancer.” It was stupid and it was crude and it was something my friends and I found very entertaining at a crude and stupid age. Robby was different, if nothing else.

Over time, Robby’s songs became a little less comedic, and his act became a bit more sincere. He was really thankful for his fans that let the character reach the heights he never thought it would, but it was clear he Rob was outgrowing Robby.

Sometime around 2010, Rob dropped the Robby character. It was apparently picked up by Brett J. McCabe that same year (something I just learned while researching this article).

But Rob did have to leave, and his life after that became something so crazy and so out of left field that it almost puts his character to shame.

Next time: Rob Potylo: The Man, Not the Myth.