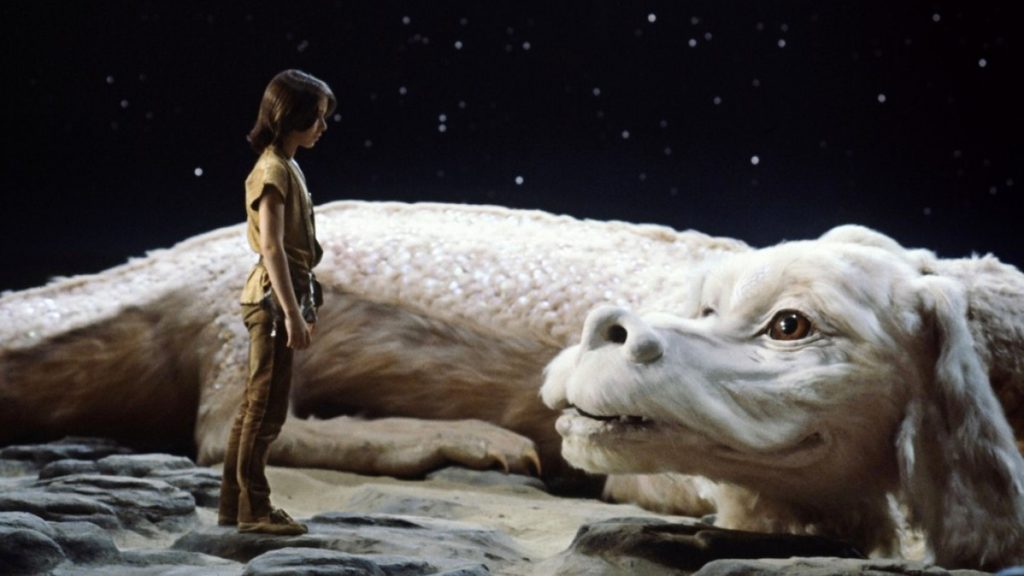 It’s a question I’ve pondered, off and on, for the last couple of decades. I certainly watched it enough; I was born in 1984 – the year it was released – and subsequently came of video-renting age around the same time it did. I took it home many times, and it would seemingly always be on at friends’ houses (in an incredibly late-’80s memory, I once saw it at a classmate’s birthday party at McDonalds, across from the smoking section). I can fondly recall many of the film’s unforgettable characters: Falkor, the Rock-Biter, the Childlike Empress, boy warrior (and shitty-band-namesake) Atreyu. The film’s dazzling practical effects were definitive of live-action children’s films of the era. Come to think of it, with the possible exception of Follow That Bird, there is a very good chance that it was the first live action film I ever saw, and there are probably untold multitudes of Old Millennials™ who can say the same thing. In short, it was a major part of my childhood.

But did I like it? That’s the part I can’t figure out. When I think about The NeverEnding Story, what comes immediately to mind (apart from the awesome dragon and that ridiculous song) is the overwhelming darkness of it all. The first time I watched it, I got up to the point where the horse dies in the swamp, and that was enough for me, thank you. The second time, I think I got up to the point where the lovable comic-relief rock monster despairs over the fact that he wasn’t strong enough to save his friends from being killed by the encroaching, all-consuming nightmare void literally called “The Great Nothing.” As a child, I was primarily drawn to silly entertainment– Bugs Bunny and Pee-wee’s Playhouse and reruns of The Muppet Show (I may have been the only kid on earth enthralled by Martin Short’s short-lived Ed Grimley cartoon). The NeverEnding Story stood in stark contrast: serious, dark, and portentous, with heavy-duty themes of death and destruction. In short, it was entirely out of my wheelhouse. So why did I keep watching it, over and over again, frequently of my own volition? 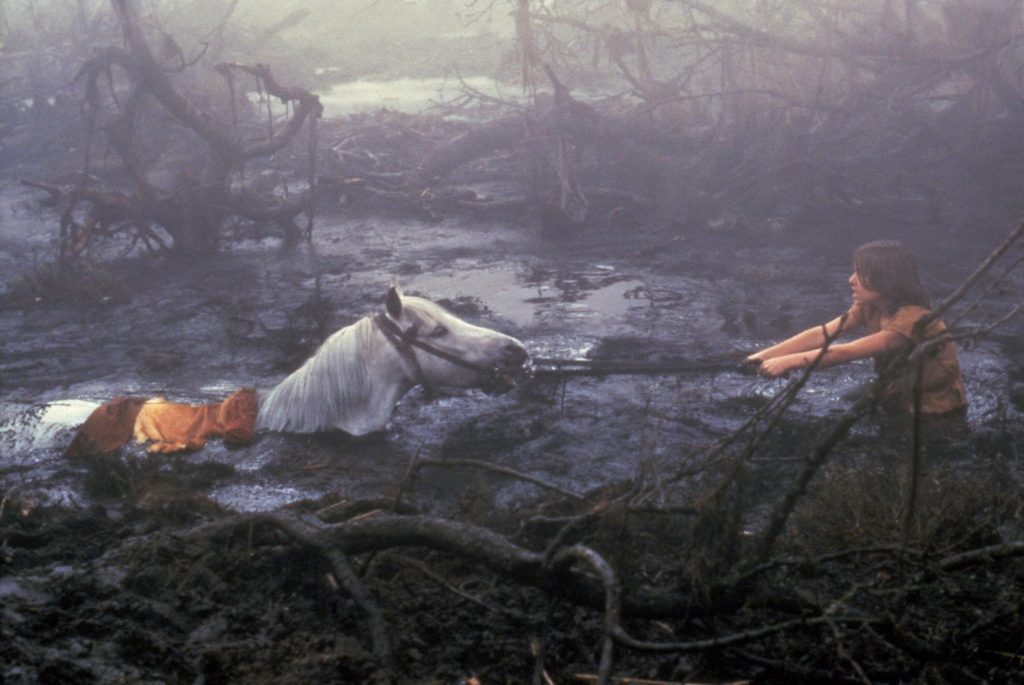 (A caveat, before we go on: I have not seen The NeverEnding Story in roughly a quarter century. In preparing to write this article, I considered sitting down and rewatching it, to help flesh out my undoubtedly hazy memories. Ultimately, however, I opted to go for a more impressionistic approach. This is about the film as it exists in my mind, where it was lodged as a child and has spent the ensuing years calcifying. I may well go see it tonight at the Coolidge– this exploration has whetted my appetite for a refresher course– but in the meantime, forgive me if I misremember plot points, or if the movie actually isn’t as dark as all that. When it comes to childhood memories, both concerns are beside the point.)

In my research, I was surprised to learn that Michael Ende, the author of the original novel, was vociferously opposed to the film’s treatment of his material (truth be told, I’m not positive I knew that it was based on a book). Dissatisfied with the film’s direction, he attempted to halt production, first through persuasion, then legal avenues. In an interview, Ende bitterly dismissed the film as a “gigantic melodrama of kitsch, commerce, plush and plastic.” This phrase in particular struck me, and not just because it sounds phenomenal in a German accent (I’m assuming for these purposes that Ende sounds a lot like Werner Herzog). What’s interesting to me is that, while obviously dismissive, these words succinctly encapsulate much of my fond memory of the film, and of my childhood in general. Kitsch and commerce were driving factors for much of the entertainment served to children of the ‘80s, and our worlds were seemingly made entirely of matted plush and knockaround plastic. In an age of CGI and streaming and cloud-based entertainment, it’s easy to forget the physicality that governed both our toys (even our video games were sturdy enough to survive being kicked down the stairs) and our blockbusters. While some deride the “warehouse amusement park” feel of adventure movies of the time (including Steven Spielberg, when discussing his own divisive Hook), there’s something to be said for the physical space these films inhabit. Most didn’t look as lived-in as, say, the original Star Wars trilogy, but they felt like they could be lived in— like a kid with enough moxie could run away and actually ride Falkor. The monsters may have been silly, but they were real.

And yet, paradoxically, in a time when Star Wars and He-Man were charting a direct route from TV screens to children’s toyboxes (through their parents’ wallets, of course), there were virtually no toys made of The NeverEnding Story: a cursory internet search yields only a German Falkor plushie and a handful of Mexican figurines. Children hoping to incorporate their favorite characters into playtime would either have to improvise (a Kenner Luke Skywalker on a stuffed dog would do in a pinch), or– heaven forbid– use their imaginations. Much like the framing story about a kid discovering a magical book (in an attic, I think? Or an old library?), there was something mysterious and otherworldly about The NeverEnding Story. To see these characters, you had to sit down, pop in the VHS tape, and confront them face to face. They wouldn’t meet you halfway.

Ultimately, I believe I did like The NeverEnding Story. But I liked it in a way that I had never experienced before, and wouldn’t have words for for many years. As adult lovers of film, we are regularly confronted with films that we respect– like, even– but find difficult to watch or uncomfortable to sit through: the works of Michael Haneke or Lars Von Trier, for example. Films like The NeverEnding Story— or The Dark Crystal, or The Secret of Nimh, or any number of traumatic kiddie flicks– introduce children to this experience at an early age, wrapped in a healthy coating of wizards and puppets and other fun things. It’s tempting to play the Old Codger and bemoan that Kids These Days aren’t getting properly scarred, but I suspect they are: the Pixar canon and Adventure Time both have their share of devastating moments, and I’m sure there are countless examples I’m not even aware of (I imagine the Promotion Pals could help clue me in here). As mentioned earlier, I have no idea what the experience of watching The NeverEnding Story is like through adult eyes, but that scarcely matters: for myself and many of my generation, it represents the first view into a larger, scarier world, and will subsequently always hold a large, dark place in our psyches.