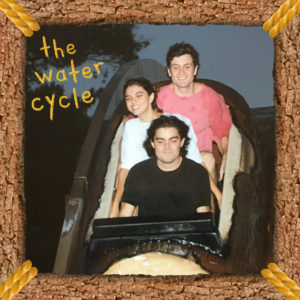 The dual themes of nostalgia and leisure permeate The Water Cycle’s new EP, Dignified & Old. This occurs both sonically and lyrically. The EP’s sound—in an indirect consonance with its title—is at once repeated but not repetitive. The melodies are simple, digestible, comforting, the tracks twee and uplifting, and the vocals soft and radiating warmth; it is nostalgic, with all of that word’s attendant implications.

Indeed, The Water Cycle—the Boston-based trio composed of Jack and Joe Kerwin, along with Olivia Mastrosimone—have opted for the nook between comfort and self-critical contemplation.  Their warm and jangly sound reminds of the same kind of leisure they pine for in the lead track, “Bored With You”: “So I don’t care if we’re not exciting / I’ll never need something new / You can take my entire life / I wanna get bored with you.” At first glance, this wish seems bourgeois, distinctly privileged: the Curse of American Suburbia, in which the overabundance of choice degrades into a total lack of stimulation. There is nothing to do. (Perhaps this impression isn’t wholly misled, given the EP’s other more middle class lyrics: “Sharing wine in Uber Pools / How could it be more clear / Lay in bed skipping school / Why wake up when you’re right here” on “Disco Night.”) But, in fact, the song seems to be saying something slightly different. Rather, “Bored With You” is an ironic (and subtle) testament to the relentlessness of late-capitalist day-to-day life: What the wish to become bored, here, hinges on is not, necessarily, the quote-unquote right person the singer wishes to find; it seems, instead, that the track is expressing the futility of being able to enter into this land of leisure altogether. The “you” remains vague throughout the song, a devious cyclicality is implied, and the “boredom” The Water Cycle yearns for is perpetually unattainable, Kafkaesque in that way, a Lack.

There is also an element of self-sacrifice present throughout the track (“You can take my entire life / I wanna get bored with you”), underscoring the dehumanizing effect of late capitalism: Nothing to lose but our bodies—our desire remains intact.

Dignified & Old, on the whole, is hauntological—in Mark Fisher’s sense, of lost futures, that which repeats but never properly existed. The EP is haunted by an idealized vision of leisure and capital which forms the ultimate goal and desire for so much of our generation: that is, the very American M.O. of “If I do this one thing, work this one job, buy this thing, live here, I’ll be happy.” It reminds us (and reminds of) the leisure that continually evades Gen Z—something which older generations are wont to remind us of. A state of tranquility in which we as a generation will never participate. We are constantly on the run, but we do not know what from. We spend our days anxious but we do not know exactly why. The EP encourages reflection on this point: What are we nostalgic for? Why do the nostalgic themes of the songs bring out a sense of comfort in us? What does this nostalgia remind of? Have we ever truly experienced that which we nostalgize?

Dignified & Old doesn’t directly comment on but instead showcases what love and life look like in 2020—that is, fraught, anxious, endlessly yearning and searching. It is a thematic mishmash, Gen Z’s obsession with nostalgia and pastiche mixed with the hopeless cyclicality and inertia of hyper-interconnectedness and late capitalism.

The motif of nostalgia—here a removed reverence for older generations—echoes throughout the rest of the EP’s tracks. “The disco DJ plays your parents’ favorite songs,” the singer crones on “Disco Night,” “you say I’m nervous / I don’t feel like that’s a bad thing.” The interplay of both maintaining a level of nostalgic aloofness and the wish to break through a postmodern sense of ironic disinterest so characteristic of late capitalism. As with “Bored With You,” “Disco Night” is not so much a scathing critique of bureaucracy as it is an exhibition of its effects: a slice of life, a testament to the sinister ways capital creeps into our day-to-day lives.

“Cooper Union,” the EP’s third track, explores the interplay of these idealizing acts of imagination and cold, sterile, harsh reality: “I dreamed of making you happy / but you passed me.” It is perhaps fitting that this track’s whole exchange takes place between two stop lights on a crosswalk—perhaps the epitome of the intersection between human technological innovation and communication: In what place, except public transit maybe, are people more physically together yet socially isolated? The song feels retro in that way, akin somewhat to Craigslist Missed Connections: How are we so deftly able to navigate the labyrinthine minutiae of our endlessly chaotic day-to-day lives yet almost completely unable to truly, deeply communicate with other human beings?

The Water Cycle bring this theme up again, on the EP’s final track, “I Don’t Wanna.” On it, we witness the ever-pervasiveness of late capitalism, the disdain of interconnectivity, and the fetishization of a utopian future we were never, truly, able to live out: “How many years till I blend in?” The whole song seems to take place on the porch of a house hosting a party to which the singer was invited—which if nothing else solidifies Dignified & Old’s recurring theme of limbo, anxiety without a cause: The narrator lingers despondently outside the home, cold in the snow, without hope of entering, playing on their phone, but not quite willing to return to their own dwelling, as evidenced by the chorus: “I don’t wanna go home.” The Water Cycle, here, is willingly suspended in the cold, between two other places of comfort and shelter (it seems the only thing keeping them from actually entering the house is this pervading sense of anxiety). It begs the question: How self-imposed is this isolation, after all? Why, exactly, does the narrator feel trapped between these two options? What greater societal/cultural forces are at play here? The hypothetical the band poses here, in “I Don’t Wanna,” is a perfect closer and summation of the senses of inertia and stagnation developed throughout the EP as a whole.

On Dignified & Old, The Water Cycle does, indeed, offer four anecdotal instances of attempts to dignify the old: from wishing to escape bureaucracy to a place of leisure, to the deification of older generations by way of a disco dance night, to a missed connection on a crosswalk, to a more literal state of limbo between two places of comfort. The EP is a testament to life in 2020, punctured by the limits of late capitalist desire.