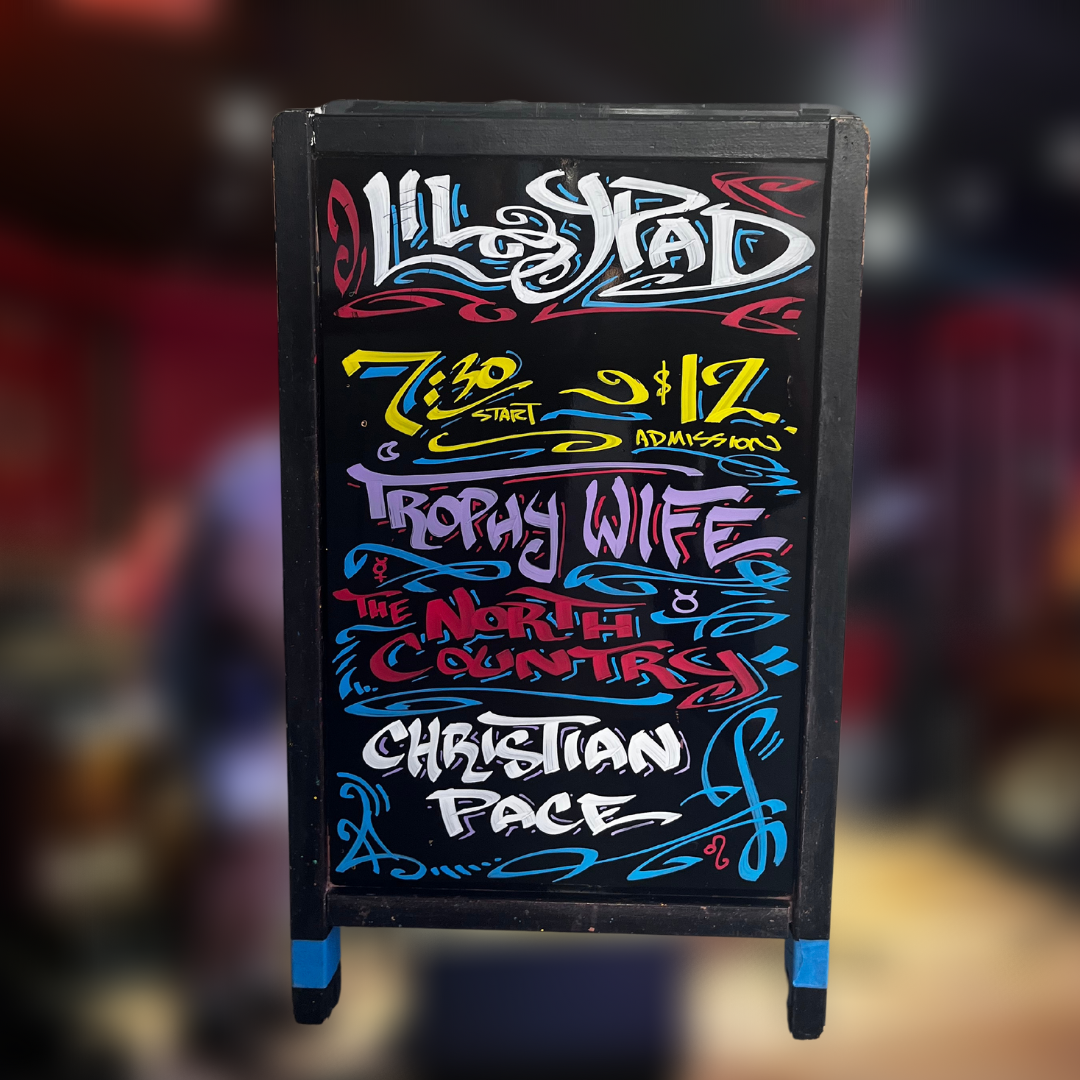 I APPROACHED CAMBRIDGE’S HOME FOR AVANT-GARDE MUSIC AND ART just as the golden hour sun cast its rays throughout Inman Square on Thursday, July 21. Nestled between an Irish pub and a community craft workspace, The Lilypad looks unsuspecting in broad daylight; it’s only the flicker of outdoor stringed lights that helps passersby notice the venue’s exterior shades of viridian and a stained glass mushroom window pane — or at the very least, the band of smokers congregating under it.

The venue’s interior is, however, a different story. The energy and ideas contained in this gathering space are larger than life, but the one-room venue is not too far off from the size of my kitchen. Each wall displays an elaborate mural, with decorations strategically selected and arranged to teeter between the line of fantasy and reality. Gig bags and instrument cases littered the few wooden benches lining the walls, making it feel like the entryway of each musician’s home after a long day. A small, yet scruffy tan and white spotted dog named Annie (which shared a name with the keyboardist’s sister from The North Country) ran circles around the bright hardwood floor. 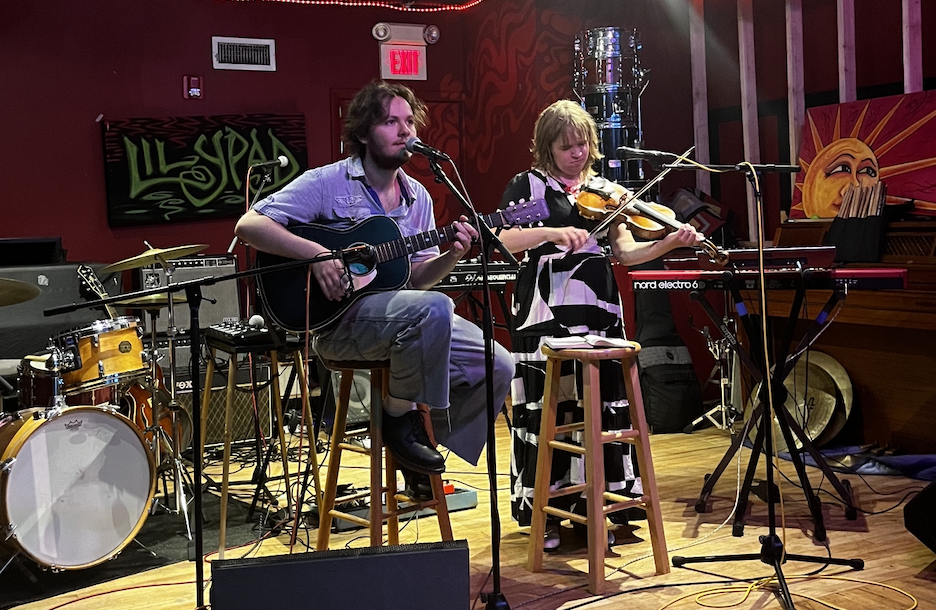 Drawn in by the sound of music and the promise of air conditioning, people filtered in and out through the cracked door all night. Boston-based DIY artist Christian Pace made friendly conversation with those who arrived during soundcheck. After an excited exchange with a young boy proudly donning a pair of noise-canceling headphones, Pace introduced himself and Lucy Nelligan, the fiddler that would be accompanying him, to the audience. He then disclosed his decision to play this set acoustically, a sound and style completely different from his released recordings. This stripped-down choice is a gem I find myself wishing I appreciated more in the moment now that I have the perspective of Pace’s latest EP Skunk; the chance that he would perform acoustically again is enough of a reason to seek out another of his solo shows.

The live set preserved the EP’s passion and intensity, yet showcased a different side to it as well. The more delicate acoustic approach complemented the vulnerability and yearning attitude in his lyricism, but at times felt inhibiting of the full frustration surrounding unrequited adoration. “Tea for Two,” Pace’s second song of the night, demonstrated his ability to seize a musical opportunity and interpret it to its fullest potential. Pace’s rapid strumming on his dark green acoustic, juxtaposed with Nelligan’s drawn out fiddle chords, perfectly pitted the song’s hasty need to nurture against his dreaded existentialism. I especially valued Nelligan’s presence on the following song, “Vampire,” as it provided a haunting backbone for Pace’s droning vocals that otherwise would have been lost, considering this feeling is largely perpetuated by the production techniques within the released single.

I tried to contain my outward giddiness as Pace announced his set would end with a cover of Alex G’s “Bobby.” Even though there’s technically two months left in the season, I don’t think it would be premature to claim his rendition as one of my top songs from this summer. Pace and Nelligan couldn’t have chosen a better track to enhance the night’s arrangement, and his description of the singer as a “fellow east coast Italian” comically bolstered it. This song was one of the exceptions where I preferred a more traditional take instead of reimagining the original. Alex G is a difficult artist to replicate, but I admired the duo’s bold attempt to do his style justice. 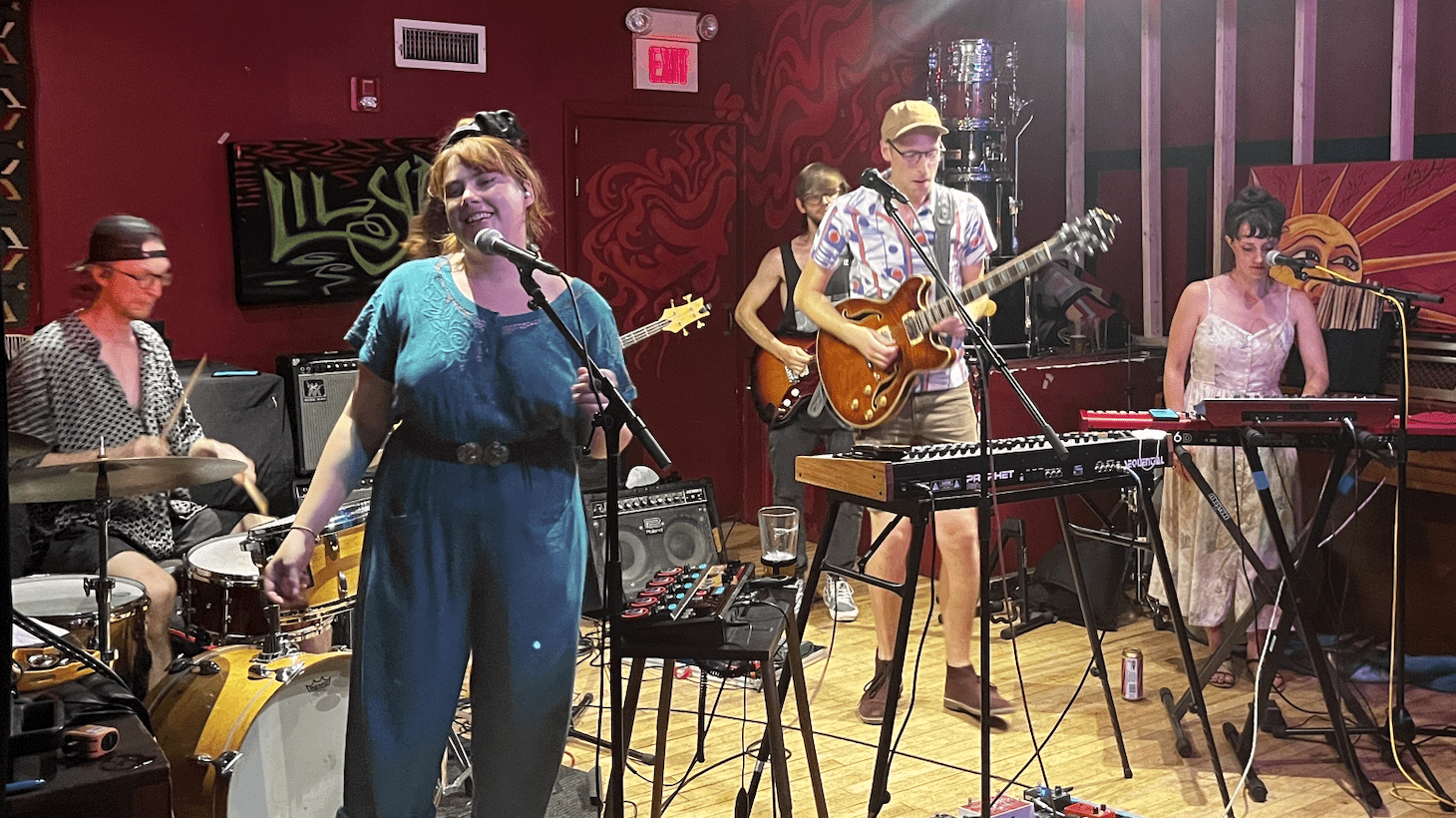 Within seconds of Nelligan’s fiddle outro, the stage underwent a transformation. Wooden stools were cast away to make room for The North Country’s analog synthesizers and customized pedalboards. Based in Washington, D.C., the experimental art-pop collective composed of Andrew Gossman (frontperson), Austin Blanton (bass), Laurel Halsey (keyboard), Jon Harmon (guitar), Kirk Kubicek (drums), and Margot MacDonald (vocals) began touring their latest EP at the start of July. Born at the Right Time (Exquisite Corpse) was written and recorded entirely remotely during the height of pandemic restrictions. Each band member contributed an initial idea and passed it around the group one by one, having free reign to add and change elements without the other members’ input.

“Born at the Right Time” didn’t just progress beautifully — the entirety of the four-minute song embodied its own complex journey. Despite the band members’ isolated contributions, the elements of music melted together by its end to create an ambient, free-flowing body of work. The same could be said about the band’s physical energy: their body parts flailed passionately to the beat, serving as an invitation for audience members to do the same. The audience couldn’t resist rocking back and forth to the music, some shyly embracing each other like middle schoolers would at a school dance, others slow dancing as if they’re in a room burning with tension.

The North Country followed up with “Be Here, Be Now,” an unreleased track addressing the art of being present. Kubicek inhaled what seemed to be a meditative breath before the song’s start, a sign I didn’t (but should have) regarded with more thought at the time. The spirited sound overwhelmed me in a strangely comforting way; it’s almost as if I became enveloped by the psychedelic composition, which is precisely how the gift of the present moment operates. Although certain lyrical phrases came off tritely, framing “Be Here, Be Now” in a simple way guarantees the song’s ideology is more transferable, all while reminding listeners of the beauty earthed in intricate subjects. I do commend The North Country’s choice to include the internal struggle that comes with maintaining this mindset. Deciding to be transparent in that manner guarantees a certain level of authenticity and connection, values applicable to all aspects of their performance. 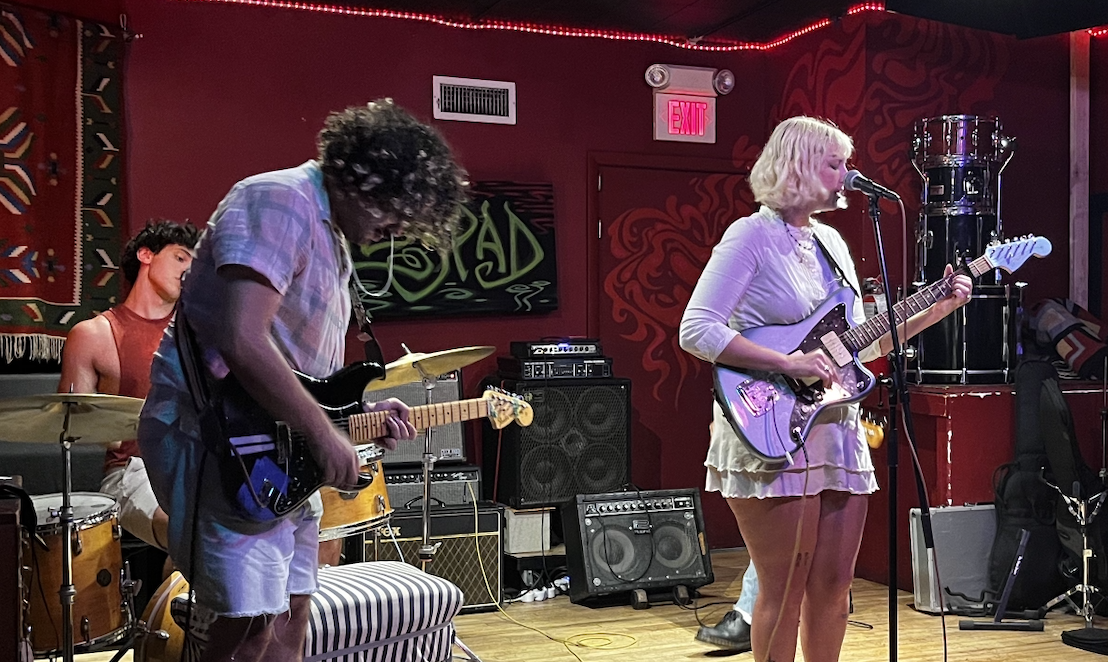 Aside from grunge as the genre offering, Pace joining Trophy Wife on bass proved to be a pleasant surprise adding to the night’s full circle effect. McKenzie Iazzetta (frontperson), Michael Martelli (drums), and Mario Perez (guitar) established themselves as a staple in Boston’s DIY music scene with the release of their latest EP, Bruiser. Trophy Wife wasted no time diving into their single, “Ask Me Anything.” Martelli’s slow and steady beat of the drum and Iazzetta’s isolated vocals swallowed the room whole. I set my pen down, ignoring my fervent instincts to scribble every thought passing through my head. I barely processed my dull hand cramps in light of the awe-striking heartbreak I felt in response to the music. The hints of agonizing desperation in the track came to life with Iazzetta’s dreamy yet depleted vocal rises and dragged-out sighs. Perez laid it all out in his playing, the ferocious emotions feeding into his strumming — not even his innate ability to replicate the layered guitar riff in “Holiday in Cambodia” during soundcheck could have prepared me for this caliber of talent.

Trophy Wife closed the night off with “I’m Getting Better,” the fourth and final song on Bruiser. Iazzetta’s voice hid underneath the power of the instrumentals, its unusually meek quality being extremely applicable to the song’s far-removed narrative. Building on themes of destruction, Pace periodically tapped a drumstick against and sawed it in the space between the bass’s body and strings instead of conventionally strumming. Perez also made the conscious decision to stay seated during this performance, crouching down to adjust the dials on his effects pedal close to its ending. It’s clear to see that this group thrives on the act of performing, each choice intentionally straying away from the recorded version for the chance to capitalize on their musicianship and creative instincts.

Like Christian Pace and The North Country, Trophy Wife carved out the length of at least one song to convey support for their fellow artists and exchange nonchalant banter with the crowd. Iazzetta joked that music as an entity is over to slyly signal the end of Trophy Wife’s set. The remark stayed with me throughout my commute home, my heart only sinking in the moment I spotted one of the few decorations in my actual kitchen: a mushroom clock.

I made sure to dance as I fixed myself a near midnight snack, letting the memory of music ring true over Iazzetta’s punchline. It’s places like The Lilypad, and the talented musicians constantly filling its lineup, that make our city’s music scene alive and well.