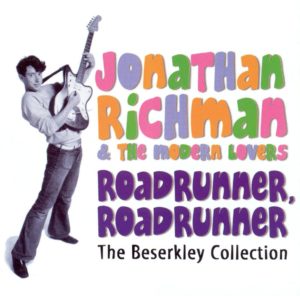 On the eve of the pandemic, I was set to see Jonathan Richman in Northampton. Oh, it was destined for perfection! Richman, a famously singular performer, playing in his home state. Afterward, a night on the town in the lesbian capital of the world—yes, how else to end the evening but by dancing at a lesbian bar (ah-ooh, ah-ooh).

I had no delusions: Worldwide closure crept ever closer. Yet concerts continued as the day neared. I neurotically refreshed the venue’s site for updates. Finally, cancelled.

Looking back, this is the moment when the switch flipped, when normal morphed into… whatever we’re calling this. Hunkering down, my taste began changing. Maybe not taste; call it need. The relationship between life-lived and music-listened-to flows in both directions. Sometimes songs color days, shading the way I internalize experience. But by the end of March, it was dark between my ears, and I listened to music that extinguished whatever light lingered. Morose indie songwriters like Angel Olsen and Sharon Van Etten, Anna McClellan’s maudlin ballads.

The thought of Jonathan Richman’s finger-snapping glee failed to enthuse. He angered me even, with his insistent sunniness and starry-eyed charm. If I dared listen to him, I wanted the nasal drone, sardonic Jonathan talking about his girlfriend eating garbage on “She Cracked”. What the hell happened to this guy? Richman went from penning proto-punk staples like “Pablo Picasso” to covering “The Wheels on the Bus” in the time between his first and second albums. Hot-headed Johnny lobotomized.

In the throes of my pandemic pity-party, I didn’t want to believe that Richman might have always had this softer side. More than anything, I couldn’t stand to think that this other Jonathan—honed for over four decades now—might be closer to something like truth. But I was deluding myself if I believed he hadn’t always had this in him. It wasn’t exactly hiding on The Modern Lovers, Richman’s only truly punk project. It lurks in Roadrunner’s two chords, the skeletal, almost folksy simplicity that reminds me of Woody Guthrie. His nostalgia for the ‘50s, too easily dismissed as knee-jerk contrarianism, served as both an aesthetic and moral manifesto. Richman always hated pretentiousness, even as he diagnosed it in himself. If anything, this knowledge of internal ambivalence, which birthed self-loathing, fueled his punkishness. And the sincerity was there, too, spoken boldly on “Someone I Care About” and “I Wanna Sleep in Your Arms”.

1973: the year Richman finished recording The Modern Lovers, the year he leaves punk behind. As if in the same motion, he writes to CREEM magazine, those folks in Detroit who claim to have invented the term “punk rock.” Edited by Lester Bangs, the notoriously irreverent publication—“America’s Only Rock ‘n’ Roll Magazine”—printed Richman’s letter. In it, he rips the conformity of too-cool rock’s affected anti-conformity. The music he loves, estranged from its post-war origins. 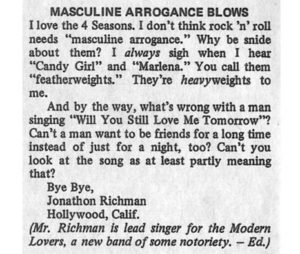 Angry Johnny swapped for Johnny B. Goode. Richman, seeing rock sliding away from its doo-wop roots, changes course himself. The next years bring a radical change in style as he seeks peak earnestness, a swerving he will later temper but never shirk. I wish to apprentice myself to this Richman. And so I begin with the transition: the Berserkley years.

With the shadings of habit erased, the new-born Richman starts small. He plays amateur entomologist, beginning with nature’s nuisance, the mosquito. Find purpose in a being so annoying and how hard could it be to make sense of the greater evils? “I’m gonna go bite-bite-bitie-witie-wite,” Richman sings on “I’m Nature’s Mosquito,” the Modern Lovers crooning behind him.

The goal of these playful experiments is often the same: trying to understand what defies reason, trying to make sense of difference. The moral—every being matters, let’s celebrate diversity—makes the songs fit for children. But behind the silliness, Richman engages philosophically with the limits of his own knowledge.

I’m particularly fond of “Dodge Veg-O-Matic”, a meditation on stasis, sentimentality, simplicity. It’s also hilarious, Richman playing comedic poet, recognizing the absurdity of his own taste. Speaking like a stuffed-up Elizabethan in rhyming verse, he champions his jalopy. It’s Americana, singing about your car—but Jonathan’s rendition, a statement in anti-consumerism, spins the tradition. He jokes about Boston’s reputation for poor driving, suggesting the solution is his veg-o-matic, a car incapable of moving. The powers that be want to junk the rust bucket, but Richman has other plans. “Dump truck dump truck, spare that car! / Don’t you know how fine it are?” he implores. The world buzzes all around, but the veg-o-matic vegetates, a constant amongst the flux.

If there’s a thesis statement from this period, it’s “The Morning of Our Lives”. Richman sings to an unnamed lover. This frame, the confessional, is a Modern Lovers staple: “I’m Straight,” “Hospital,” “I Wanna Sleep in your Arms”. Here, though, he sings to himself. Either that, or he relays a spiel he’s performed in the mirror, fresh out the shower, day after day. A mantra. The new Jonathan, he runs on mantras. He’ll convince his lover because he’s convinced himself.

Cloaked in ‘50s gauze, “The Morning of Our Lives” is easy for me to tune out. I assume I’m hearing the old Jonathan, proto-incel, left-field horndog. Actually, though, he’s something of a realist behind the overly sober sheen.

It hurts me to hear, to see you got no faith in yourself

It bothers me now to watch you, you got no faith in your own self.

You listen more to your friends than your own heart inside

Well, you listen to them, oh but you hide

The impetus, almost subsumed by the pop optimism of the instrumental, is anger, frustration. A punk problem: Your girl’s pissing you off. But Richman’s ditched the scribbled missives. He addresses, directly, his feelings. Not by voicemail, not as fantasy, but face-to-face. Reflect. Think for yourself. His gift, in part, is observational. He watches her. He sees her hiding, trading belly-laughs for stony silence. Once, she could stumble over-eager, all passion. Now, a detached cool. To care is to care too much.

For a song so positive, there’s a surprising lack of platitudes. “You’re not as bad as you think,” he sings. That makes for a shitty love letter. There’s not even any love in this song. No talk of beauty, no begging. Richman, he’s not Romantic in the capital-R sense. He sees a problem he once diagnosed in himself. A thoughtless pessimism, a waste of time. He continues:

Darling, you always put yourself down, but I like you

That’s all I came to say

Cause you got the same power in you

It bears repeating. Like, not love. No superpowers, just human ones. The tact needed for unsolicited advice to absorb in a resistant listener—my insurance gets billed $200 an hour for that. No one asked for Jonathan’s help. But his plainspokenness yanks me out of apathy. I can’t argue with it. Even me, draped in a shroud of cynicism, numbing as Novocaine, I hear this.

And then comes the chorus. The one case of hyperbole, “We can do anything we really want to.” I’ll excuse it. Your becomes our. Carpe diem. Deeper than that, though, the morning metaphor: youth. Hence, I think, the children’s songs and child’s whimsy. Yet if “Morning of Our Lives” is any indication, Richman isn’t ditching real for rose-colored. He sees anew. He swaps assumption for observation, and from there, births personal philosophy.

Why can this new Jonathan be so off-putting? My own equating earnestness and thoughtlessness. But Richman clearly knew the other side, life where everything undermines, nothing works. And his perpetual positivity is studied. If anything, he takes the long way, the hard way, risking reputation on the hunch that common sense might not be that sensible. Here lies my anger. Punk I can understand. I am yet to appreciate the small, life in miniature. So I sit in it, Richman singing lullabies, bee-buzzing and gnat-gnatting, trying to make it my own.