Anyone living in Lynn could tell the Lynnway was going to very slowly turn into something different. They’ve heard talks of apartments and condos replacing everything on that ugly stretch of road since they were born. They slowly saw some change; a Starbucks emerged, hidden near all the car dealerships and dollar stores. Not a big deal. Sometime in the mid-2000s, they heard the city had finally moved the South Harbor power lines, freeing up a big chunk of close-to-Boston waterfront land; however, nobody knew who owned what, what would be put where, or what impact it would have on the other establishments inhabiting this very modest yet valuable portion of the city.

Some people started the grieving process when everybody’s favorite take-out beach food joint, Christie’s, was demolished. There was a purity to that place, like nobody had touched it since the early 70s, but somehow the food and milkshakes remained edible and delicious. Then went the Garelick Farms factory, otherwise known as “the smelly milk truck” place, which I’m guessing was a big factor in dissuading anyone from wanting to live anywhere on the Lynnway, regardless of how high-class the new rumored condos may be. The Porthole would be the last big unfortunate demise for most Lynners. It’s one of those places everybody’s parents and parent’s parents ate. It was a place where old people would eat haddock and not-yet-old people would grab mixed drinks after a trip to the beach. 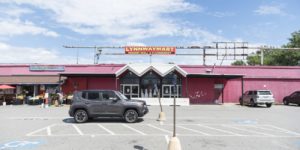 Only now have I been affected by this landscape shifting. I received this link in a text from a friend with the comment, “saw this coming.” The Lynnway Mart/Mass Merchandise Mart will be demolished in the near future, seemingly for office buildings or condos that are, in my opinion, not deserving of being situated next to the most entertaining and dangerous Wal-Mart I have ever been in. For those of you unfamiliar with this stretch of the Lynnway, the Mart in question was once a Building 19, with a neighboring indoor and outdoor flea market known as the Mass Merchandise Mart. When Building 19 closed, the whole thing just became known as some kind of “market” to most people; Lynnway Market, Lynnway Mart, Mass Merchandise Mart…they all meant the same thing. That thing, to me, is the giant heart of Lynn. Pure in the same way Christie’s was, as if it had been untouched by the outside world for years.

Imagine never having been in Lynn before. You were told that this is the best way to get a taste for the city. So you drive there, past the McDonald’s near the methadone clinic, and park next to a woman removing strange religious tapestries from the back of her trunk, dragging them towards her outdoor setup. You see her product today consists not only of Jesus and Mary decorations, but also pantyhose and several boxes of VHS tapes. You wonder if she cares about the rain sogging the cardboard sleeve of Teenage Mutant Turtles 2: Secret of the Ooze. 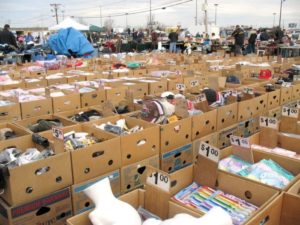 The rest of the wares you see across these tables laid out by madmen and women of every race and color comprise of old WWF action figures, Beanie Babies, and children’s clothes. It all looks pretty basic to you until you bump into a man selling mannequins. It takes you a second to realize he is not selling mannequins, but just the arms of the mannequins. You do not make eye contact. You think maybe all the fun is indoors, so you proceed inside. 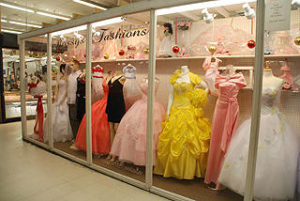 Gravy boats. A whole wheelbarrow full of gravy boats, one dollar a piece. You have so many questions. Why? And how? Are millennials killing gravy boats?

Baseball cards. Porcelain tigers. Old video games. A table of lamps, all identical, all with the appearance of a  scarecrow chandelier. Then you see the swords. It makes sense now. Every time you had mentioned this place to someone from Lynn, they’d say something among the lines of, “oh, that place where I used to buy swords?” You wonder why so many people you talk to wanted to own swords, but you think if you lived in Lynn as a 16 year old boy with nothing to do, you too would probably pick up a katana with a dragon on it and go use it to hit things in the woods. 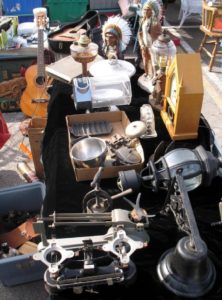 You push aside a beaded curtain and view multiple sharp ninja, samurai, and fictional weapons lining the walls. You decide on a small sharp shuriken-type device that can only be described as the stabby boomerang thing from Blade. The salesman holds it up, presenting it to you, as you hand him a 20. “It comes back to you!,” he exclaims in broken English. “Go to a beach and throw it and it will come back. Just wear a baseball glove!” Then he laughs at you.

You exit the store and see the mannequin man move a pile of unsold mannequin arms into his trunk, which you see contains some mannequin legs. A woman in a Sin City Cycles hoodie pushes an empty stroller along the Lynnway with a black liquor store bag in one hand. You throw the Blade thing in your trunk and depart from the area. To think there’s a bidding war over this piece of land.

And to think there’s someone out there, like me, who has such nostalgia for this place that he feels to need write a “the things are going away and I’m sad” piece about it.