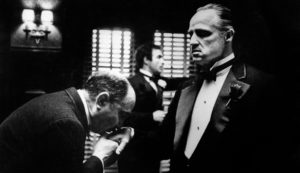 I can’t think of a better way to describe this dark vision of the American dream other than that simple proverb.

The Godfather, in all honesty, needs no introduction. The 1972 classic is world-renowned for its story and its characters, spun neatly together with the toxic yet brilliant concoction of grief, sorrow, violence, family, and pride. Francis Ford Coppola’s epic spanned a franchise of three films, Parts I, II and III (please see the sequels, it’s a must), that chronicles the melancholic downfall of the Sicilian crime family, the Corleones. It’s a film that gets into your head, into your heart and deep in your veins; it sticks with you like no other cinematic experience. These characters will never let you go and never let you forget the tragic story of their lives.

In 1945, the Corleone family parties in the backyard of the family’s compound in Staten Island. The only daughter in the family, Connie (Talia Shire), is getting married. In between the bright and joyful shots of the summer wedding party outside, brilliant cinematographer Gordon Willis slaps us in the face by cutting those scenes with the darkness (literally and figuratively) of what’s going on inside. Connie’s father, Don Vito Corleone (Marlon Brando), the head of the family, discusses matters inside the house, flanked by hot-headed son Sonny (James Caan) and close family friend and consigliere Tom Hagan (Robert Duvall).  The three men listen as men line up to ask the Don for help; in return, Corleone warns that he will someday call upon them for something in return. The family are mafia kingpins, feared and admired by the Italian and Sicilian mafia that runs deep in the underbelly of America.

Coming home from serving as a Marine in World War II is fresh-faced son Michael (Al Pacino), bringing along his naive girlfriend, Kay (Diane Keaton). Knowing what his family truly does, Michael wants no part in it and briefly explains to Kay the workings of the family, as well as who the guests in attendance are – including his underhanded brother, Fredo (played masterfully by John Cazale). Meanwhile, police arrive and take photos of the license plates of the guests. Sonny rips their cameras apart and instructs them to get lost.

Soon, Vito is gunned down on the street; suddenly Michael, who wanted nothing to do with the mafia lifestyle, is itching with anger, revenge and bloodlust. Sonny, who has taken over while Vito recovers, deals with his own issues of Connie getting beaten by her new husband and old friend of his, Carlo.

Michael plans to kill drug baron Virgil Sollozzo and NYPD Captain Marc McCluskey for being involved in the shooting of his father. Pretending to want to make amends with them, he invites the two to dinner in the Bronx. In the bathroom, he conceals a gun and takes the two out in a brilliantly dark and notorious sequence. Michael drops the gun and storms out, thus beginning his sorrowful journey into eventually becoming the head of the Corleone crime family.

I could write about The Godfather for ages and describe it with the most descriptive language I can, but it wouldn’t do it justice.

You need to see it for yourself.

The Godfather is an experience that demands to be seen and rewatched again and again. Its story, its characters, its heart, its soundtrack – it’s poignant and so tangibly gripping that it really is unlike any other.

The Corleone family’s story and their tragic take on the American Dream will haunt you for years to come.