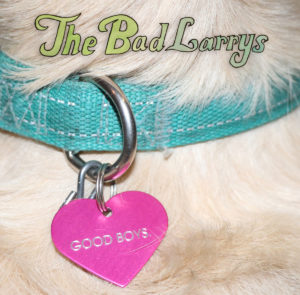 I tend to forget a lot of things. Bills, groceries, ,movies, did I feed the dog? but the Bad Larrys music is not one of them. Leaving a lingering impression on the listener I found myself absentmindedly humming their songs days later after only hearing them once.

This self described “dog and skate oriented angry, bubblegum, power pop” band has a real gift for harmonies and melodies that draws you in immediately. The way they emphasize certain words around the melody (un-com-fort-able,al-read-y-know in “18,000”) and harmonize on just the right part (the chorus on “Take Care”) play like it was always meant to be that way. This gift is the band’s secret weapon as they smartly wrap less than happy feelings around them before many may even realize it.

Ignoring these lyrics would be doing the Larrys a disservice though as there’s real substance here. Justified anxiety, loss of identity,bad relationships and rollerskates all get touched upon with the title track, a sarcastic put down of “Good Boys”, (“I don’t want a good boy ’cause I’d miss this pain too much“) being a clear standout. Feeling good about feeling bad never sounded so pleasant.

The Bad Larrys are playing at The Jeanie Johnston Pub in Jamaica Plain on January 19!