The idea of artists being people that are constantly pushing buttons and boundaries is as entwined as peanut butter and fluff. There’s this mythic embodiment of artists, and you’ll see the quotation memes on every forum expressing that ‘if you’re not pissing folks off, well then, you’re not a REAL artist.’ It’s as much a part of the artist uniform as a beret, a pallet in your hand and a black and white striped shirt. That’s not to say that just because it’s a cliche that it’s not true on some level. When you make a mark on a wall and want it to get people’s attention, on some level you have to provoke that out of people. What place does this idea have in a digital age where everyone is provoking and being provoked constantly? Is attention grabbing a means to an end?

In some ways, being an artist was like being on the internet before the internet. You make a piece that says something boldly but you don’t necessarily have to come face to face with the subject. Instead of having to confront Nazi soldiers, Picasso painted Guernica. While he did face repercussions for the painting, there was a distance which allowed for more discussion rather than just a knocked out tooth and a black eye. The punched face doesn’t even end the discussion because your piece lives on longer than the black eye. However, we now live in an era where on some level, everyone has that power. Everyone has a platform to voice opinions to the masses and a good percentage of people use that distance to troll. Angering just for the sake of that feeling of superiority, of “I got you angry about something I don’t even care about!”  It’s easy, it takes little effort, but it is effective and makes use of that distance in the same ways. It’s a dead end street as societies’ senses dull and you have to keep escalating your actions to get the desired effect to keep up with the pace of 4chan.

There has been plenty of good art that made use of shock. In all of it, the provocation was just one step in the process. The upsetting nature draws a viewer in to a larger contemplation. The Young British Artists (YBA’s) of the 90s were great examples of this. Combining unorthodox techniques and materials with social taboos like death, religion and pedophilia they drew audience in, created a stir, got the publicity but when you stood in the room and saw the flies being born as maggots only to fly into the bug zapper and join the pile of thousands of others on the floor, there were lasting effects ( Damien Hirst’s piece “A Thousand Years”). It’s unlikely today that Chris Ofilli would have gotten a comment from the mayor of New York denouncing his Elephant Dung Madonna when a much more crude video of someone eating elephant dung dressed as Jesus on Insta might have 5 million views (not a real video, yet). 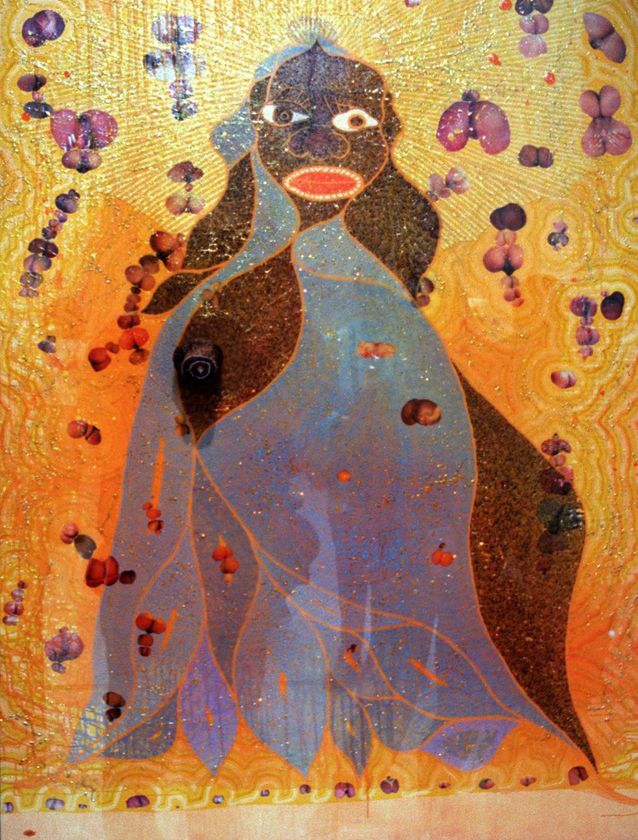 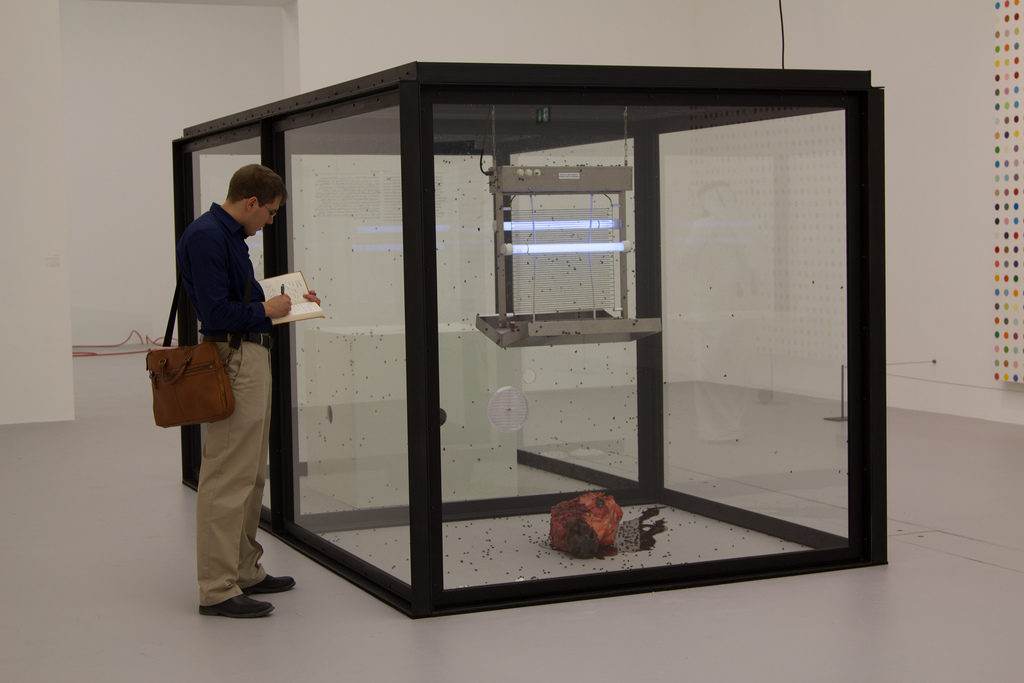 I started down this line of thought due to a Canadian painter (who I’ll not name) whose show is currently causing a stir. I’m not naming him because I feel like he’s an example of someone using provoking imagery and then using his art as a shield but there’s no greater thought behind it. I don’t want to give him any more publicity (you can probably google your way there) but you have to talk about the good and the bad. He makes blandly painted images of white supremacists and then collects the money when someone buys his portrait of Dylan Roof, etc. There is an idea in post-modern thought that an artist is simply a vehicle to mirror the world around themselves and he uses that as a way to explain all this by saying “I’m just a mirror to the world I see of angry white men”. It’s a similar explanation that existed for early Gangsta rap albums. If you don’t like the ugliness I’m creating, be mad at the world that exists around it.

In his case though, it’s a lazy idea with lazy execution. The painting style is boring rather than dry, meaning it’s not emotionless, it’s just cliche. There’s no Eric Fischle or Leon Golub statement on the subject via the way he paints them or even any sense of making a statement by not making a statement. It’s just basic. Then there are some basic flaws in his “mirror” argument like, is he really expecting the audience in art galleries to be a) unaware that there are a lot of shitty racists in the world or b) be the racist angry white men that will see this reflection and contemplate? The way he paints these images don’t make either outcome likely and the images of these men surround all of us, constantly. Unlike the YBA movement in the 90s, this is shock not even for the sake of shock or to provoke, but shock just because one ran out of ideas. Get the attention and then run out the back door with a pocket full of money before anyone can give you that black eye and knocked out teeth. 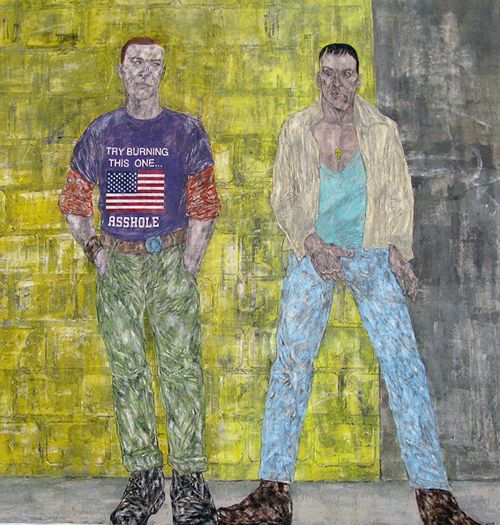 THIS IS NOT THAT CANADIAN GUY I WAS TALKING ABOUT. Here, Leon Golub shows how you can paint crude people crudely.

This is much more reflective of the provocation that’s left over and being used today. The fine art world, for better or worse, is focused on the new more than any other expressive medium. If something has been done, the serious attention for it isn’t there and you’ll find your prints in the Kinkade section of the global art store. You may be able to provoke some articles about your show and get a minor amount of attention but without serious consideration you’ll be jumbled in the kitsch category and without the mass appeal of most of your contemporaries, and then you’re just a niche poster designer for the Proud Boys. The over-saturation of shock creates the need to escalate the provocation to more disturbing areas but also by the time you get there, it’s an already tilled field. Many people can make a shitty meme faster than you can make a shitty painting.

I myself am an artist that deals in images from pop culture. I did a black velvet piece of a person who was a monster knowingly making use of something provocative to start a conversation. As someone who makes images using people from the greater cultural lexicon, it was only a matter of time that I made a painting of someone who seemed fine and then ended up being a garbage person so why not start the discussion earlier.  My thoughts were that I’d make this thing and at the opening, I’d have interesting conversations with people about whether painting a portrait of a criminal was an endorsement of that person’s activity, simply a description of what they look like or some place in the middle. What I got was silence about the piece during the opening and then as I was taking down the show, a random person on the street was screaming to other people in the area that my show was garbage because of that piece. He never directly spoke to me, but made sure his voice was loud enough so that I was sure it was directed at me. He was a bit of a wildcard in his general demeanor (even beyond that) and the fact that he didn’t seem to want to talk to me, just about me, I never really engaged. It was a more analog version of a yelp review but I really wasn’t sure what he wanted out of the interaction. I was also busy hauling all kinds of shit down the street so, yes, I’ve still never had an art fistfight.

So, the conversation was never had. I provoked something but it wasn’t thoughtful, it was just simply attention. I have no idea if people had that conversation in their head as they viewed the painting and it’s impossible to tell if I made the turn. If I provoked people into paying attention but then the piece didn’t have enough sustaining power or it wasn’t even shocking enough to get them to pay attention. I don’t think it was successful on that front (still a beautiful painting of a shithead!) and I’ll probably make another few ham-handed attempts at it in the future before I can figure out how to navigate it. Or maybe I won’t. It’s not a necessity today like it was in the past. It’s not new and in many ways it’s as traditional to be shocking as it is to mix red and yellow to make orange. The best modern artists are more talking about reflecting the world they want rather than just turning any societal norm on its head to jolt you into a conversation. The most common reaction today to being provoked is of anger and that just leaves you with a shady looking man who stinks of rollies screaming about you in the street. If that’s all you get, you can do that easily without putting 70 hours of painting into it.

5 QUESTIONS WITH MALLIKA CHANDARIA OF THE 98

I’m With SECSE: An interview with the organizers of Boston’s sex educators strike

Solidarity with East Coast Sex Educators has been on strike against Good Vibrations since August 15th.