“Addiction seems to spring from the same source as great art.  It also destroys great artists, but the artistic mind is certainly more inclined to addiction than that of, say, the accountant’s mind. ”  – Erin Burley 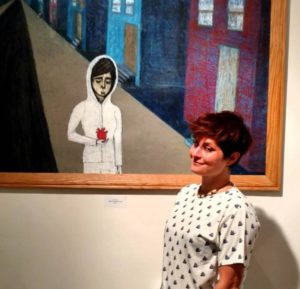 The artist posing in front of one of her pieces, with more of her artwork  at the end of this article. (As a begging, teary-eyed writer, please do not skip to the end.)

Before I bring Erin Burley onto the stage, I feel that I must give a showman’s introduction with a glass of scotch in hand and an oversized tuxedo which I borrowed from a deceased relative. I raise my glass with a nervous smile, to this artist before a crowd of millions in which they too, can see her art and feel the beauty of it.

The New Jersey native had come to 621 Huntington Avenue after years of battling addiction, and then, began to truly perfect her craft. And (I carefully say,) more importantly, meeting an influence whose demons sadly had won the battle. Despite her struggles and troubles, Erin has created a style all her own. A style that is recognizable and one in which I can say, draws me closer to this beautiful artist.

Sadly I have never met Erin in person, however, from interviewing her and viewing her artwork, I feel that I have known her forever. Cliché yes, but with much in common, this beautiful soul is someone that has, despite the struggles of a playful devil in her mind, she has created art that has truly captured the feelings in which I cannot write. Perhaps sometimes, some feelings can only be painted, and only some blessed, or cursed humans have the ability. This is Erin: (APPLUSE)

“I started my journey into painting by making collages. When I was 24, I went to rehab for an opiate addiction, and a halfway house after inpatient. I had a lot of anxiety, and to keep my hands busy I used to make collages from books I’d get from thrift stores and then 3D collages with objects I found in thrift stores. When I was 27 I moved to Boston and got a chance to attend Mass Art for a year and a half through Mass Rehab, a program that will give you money for career training and school if you are disabled (in Massachusetts you are considered disabled if you have a substance abuse disorder and a mental illness.

At Mass Art I took a large scale drawing class and realized that I loved it. It took a while to feel like I could draw.  I had the idea, like most people, that I just wasn’t very good at it.I moved to Boston with an ex girlfriend whom I met in recovery after rehab in South Florida. She was a student at Emerson who had taken a leave of absence to go to rehab, and had to finish her master’s degree in poetry.I am not part of any movement, and I feel rather removed from other people in my generation. My post highschool life wasn’t college and a career, it was jail, rehabs, all the ugly experiences a heroin addict in South Jersey has.

As an artist I think this helps me have a unique vision. I don’t mix with many people, I’m sort of a hermit, my own interests are very removed from what I imagine my peers are interested in. I’m into French literature (Rimbaud, Genet, Celine etc) and Expressionism and World War 11 and blues music.

I don’t have a muse, really. I have people who are very inspirational to me, poets and other artists, and there is a girl that I love, but honestly she has never been a main subject of my art, though I have drawn her a few times. I like broken people who find a way to still create, outlaws like Genet who wrote a book so sublime it got him out of prison or Leadbelly who was freed from Angola by writing a song. People who suffer and aren’t consumed by it. Basquiat is a huge artistic influence right now…5. Arthur Rimbaud is very dear to me.  Heironymus Bosch.  Egon Schiele. Frida Kahlo.  Tiffany Sedaris.  Louis-Ferdinand Celine. Bukowski.  Blind Willie McTell. Toulouse-Lautrec, Leadbelly. Edvard Munch.  Billie Holiday. Basquiat.

I have never made any money in my life except my early life as an addict and thief (I used to commit retail theft, in Walmart, and local supermarkets), waitressing since I was 16, and selling my art. The art is a very recent thing So many creative people I know have had their creativity completely short circuited by trauma, addiction and mental illness.I like to be alone, with music and the TV on, in my “sacred spot,” just a room with a lot of stuff pinned to the walls, and my record collection and art supplies.I’m on methadone, and I smoke weed medicinally. That’s all.  Cannabis is a life saver and I think it will be instrumental in leading us out of the opiate epidemic.Of course.  Van Gogh, Basquiat, Tiffany Sedaris, Frida, Munch…..all those people were mentally ill, or addicts, which is a form of mental illness.  Addiction seems to spring from the same source as great art.  It also destroys great artists, but the artistic mind is certainly more inclined to addiction than that of, say , the accountant’s mind.. I play guitar and write songs sometimes and I feel that has helped my visual art more than anything.  It seems to create so many new connections in my mind, new ways of learning and seeing. I also write poems and the occasional short story, usually about blighted lives and broken brains.

Celine once wrote, “The important thing for a writer to do is make himself scarce… The only thing that matters is the writing itself.” That applies to visual art as well I think.  If the work doesn’t speak for itself, without the life of the artist to fill in the blanks or make it interesting by osmosis, it isn’t a very strong piece.

My early incarceration for boosting goods from Walmart was probably one of the most influential experiences of my life. It set me apart from humanity in a way.  I would never forget how it felt to be locked away in a cell detoxing from heroin. That’s an intensely solitary experience. It’s deeply unpleasant. It’s almost hallucinogenic, because your perceptions are so altered by the nightmare chemistry of withdrawal. All the paintings of solitary figures in sinking boats, that’s me, floating on that steel and rubber bed, outside of time, a tiny blip in an ocean of agony. I’ll never forget that feeling.

I go to therapy every week, I have been doing so for two years now, and I’m just starting to realize how much of that experience I carry with me..when I wake up from a bad dream, the terror is the terror I felt in Burlington County Jail. You have to find some way to manage that terror. You have to find a way to swim , or some kind of life raft, or you just sink and you don’t come back. Most people with this disease don’t make it out of the dark forest you know? The statistics are grim. The statistics are merciless.

Jail, and the Tibetan Book of the Dead, those are the two things I credit for making an artist of me.

There’s so much misinformation out there about methadone. It certainly doesn’t dull me. I wasn’t expecting it to curb my artistic output; no matter what the circumstances of my life are, I always make art, compulsively. Methadone has actually drastically improved my artistic output by giving me stability and patience. I have made and sold more compelling art in the past year than I ever have in my life. With that stability I’ve also been able to undergo therapy for trauma which seems to enrich my art as it enriches my internal world.

Marijuana is key for managing my PTSD and the social anxiety that is rooted in the trauma I experienced, as a young, vulnerable, naive female in one of the most dangerous cities in the world. I am not being hyperbolic — in the years I was doing my dirt, Camden was the most dangerous city in America, some years coming in #2 most dangerous city after Detroit. This was the early 2000s. I went to rehab in 2008, so I saw some shit.  I experienced a really brutal, ugly, life-destroying reality, a hidden world. Camden back then was like a third world country, medieval type squalor, in the richest country in the world. It was bizarre. Ten minutes from Cherry Hill, one of the richest suburbs in America, was North Camden with all its myriad open air drug markets… my experiences with human beings makes me want to avoid them.  Sometimes I wake up with a sense of doom in my stomach, and it feels like there’s not enough air in the room. Weed helps with that.  I used to take Xanax, but of course I can’t anymore, so cannabis is incredibly helpful. It’s a very gentle, forgiving substance. Weed’s not magic. It doesn’t cure everything and there are some mental disorders it is terrible for. Therapy, medication, diet and exercise are all just as important. But my God, does the weed help ease a certain kind of spiritual malaise that nothing else can touch. It restores a childlike sense of wonder to my perception. It cleanses the muck from my sensory capacities.”

Although my interview ends there, in a brief ending, it seems appropriate. The artist had done my job for me by writing an almost autobiographical account of her early days of addiction, and then growing into the artist I’ve grown to love.

With that, I’ll stop there folks. Please see a small gallery of her work below, and visit her personal page for more of her work. (APPLAUSE) 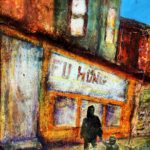 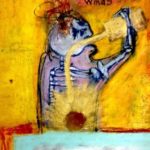 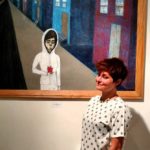 A beautiful artist in front of a stunning piece she has painted. 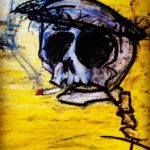 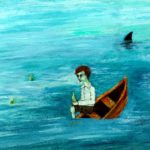 “One For the Road” 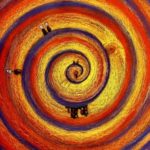 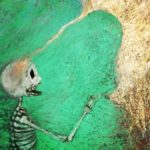 “Ain’t No Grave Can Hold My Body Down”