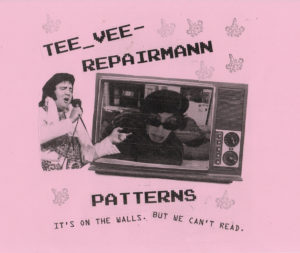 Sydney garage punk vet Ishka Edmeades’ first official release as Tee-Vee Repairman is a blend of confection and gasoline. Teeming with saccharine punk nastiness, Patterns manages to be daring and contradictory over its’ mellowed-out textures. The lyrics are pouty, the synths are tart, the rhythms are tinsle-thin yet strong enough to elevate Patterns from being a purely sonic experience to one that grips all five senses. Ishka Edmeades as Tee-Vee Repairman is a monster in creating the sound of curdled hot-pink nostalgia. This record is sure to leave you alone on a soccer field, coated in melted ice cream, and pulling up grass by the fist-full.

Right out the gate Patterns is as lively as it is sour. No track is longer than two minutes and change, each one up-beat and pettish. Rogue simplicity characteristic of both punk and soul come through with impressive strength considering how short the project is, and how difficult that kind of demeanor is to come by naturally; there’s not an ounce of stiffness or ersatz attitude.

First track “Bad Taste” opens with high energy and pace exemplary of the kind of feel-good-about-feeling-bad mood the whole project has. The lyrics’ simple refrain “that’s the way it goes” is sneered out through pinched vocals that are dizzying and cavalier––filled with the rotten charisma of youth in motion. “Bad Taste” is a choice opener for this project, immediately addicting with its head-shaking rhythm and tonal fizziness.

The drumming on Patterns shows incredible restraint: Tee-Vee Repairman takes a risk trading in prototypical/ genre-typical/ fuller percussion in favor of something pleasantly lithe––focused and frothy. Tracks “Lights out!” and “Dirty Hands” use this light-footed, up-tempo, and dynamic drum work to draw out the killing points of the melodies and makes you crave them more.

Live drums seem to be subbed out on the title track “Patterns” and replaced with rather chiptuney automated ones, but they’re well-suited for the song’s sugary synths. The more contemporary d.i.y sounds work around the sandier garage elements and become something thats more aware of itself as a musical experience, an emotion, a sonic memory. Everything about this track is appreciative of synthetic nostalgia.

There’s a sudden influx of chlorine and various other hair-singeing chemicals on the latter two tracks. On “Lights out!”, there’s a crisp whimsical feeling amplified by lyrics teasing like a schoolyard game of tag. The distortion on the vocals is kicked up a few notches, and cuts through the clean atmosphere laid down by the instrumentation, creating utterly tooth-rotting chaos. There’s controlled strength in the drums used, something strong and reliable about the rhythm.

“Dirty hands” has some nice movement about the space of the sound; things shift very subtly in-and-out of focus, traveling around in a womping sort of motion. The lead guitar is accompanied by those looser, steam-light drums once again, and the crescendo for nastiness is the pouty gum-behind-the-ear charisma of Tee-Vee Repairman’s vocals.

The whole thing is perfected with biting humor and a house-trained fuzz–it truly feels like this project was concocted to inspire daydreams.