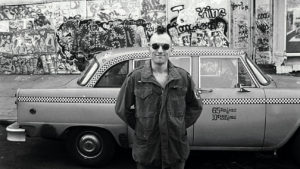 Yes. Yes, I am, because you should see Taxi Driver at The Video Underground.

The grime-slick streets of New York City in 1976, slathered with graffiti and riddled with crime, is the playground for jaded and manically depressed taxi driver Travis Bickle (a frighteningly good and weirdly charming Robert De Niro). As he lurks through the night to try and pacify his insomnia and increasingly disturbed behavior, he sees nothing but disgust for society. His disgust only grows as the nights go on and he finds himself a regular at a crusty, run-down pornographic theater in a dilapidated borough of the Big Apple. 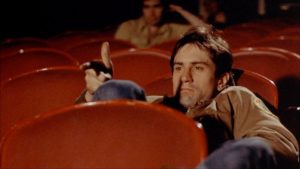 As Betsy continues to shun him, Bickle continues to sink into a further dark hole of bitterness. He is lurking the streets of the hopeless city late one night when Iris (Jodie Foster), a teenage prostitute, hurls herself into his cab to flee from her abusive pimp Sport (Harvey Keitel). Sport drags her back out and into the night.

This is Bickle’s tipping point: the sleaze and disintegration of the city is too much for Bickle to bear. He is watching society crumble before his very eyes, and he just can’t take it. He notices his thoughts are becoming more twisted and involving of violence, but he does nothing to stop it, which will eventually lead him down a path so dark even he couldn’t imagine.

Taxi Driver is one of Scorsese’s best—the cynical, ghostly backdrop of a tortured 1970s New York with lone Travis Bickle as its focal point is a painting that sticks with you long after the film has stopped rolling.

De Niro’s Bickle, delusional and anguished, is nearly unrecognizable as you watch him fall further down the rabbit hole of insanity. It earned him a nomination for Best Actor in a Leading Role, among other accolades.