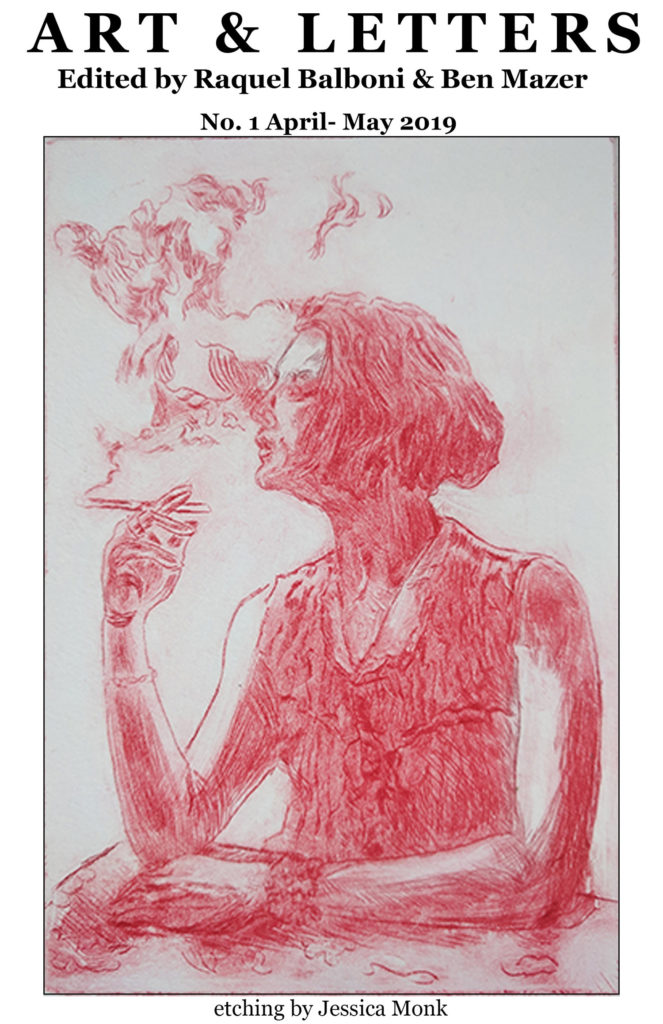 Cambridge/New York poet Ben Mazer has come together with local up-and-comer Raquel Balboni to create Art & Letters, a magazine dedicated to showcasing the best that the poetry/visual arts scenes in Boston, the United States, and the world, have to offer.

The concept for the zine came together quickly, with the two collaborators sharing a resolute vision for what it could become from the very beginning.

“The poetry scene in Boston needs a lot of gaps filled in,” says Mazer, “it needs liveliness.”

Indeed, the two found local arts circles to be largely unmotivated, existing without enough support from young artists. Art & Letters came together out of a desire to change that, and, in one issue, has already made great strides.

“We want young people to have a magazine that they can look at and say ‘this is what I should aspire to,’” says Mazer, whose decision to feature young artists and poets alongside established players like Charles Bernstein and Fanny Howe was made with that goal in mind.

“People read by comparison,” he says, “so having these young writers literally next to some of the greatest living poets is really inspiring.” Balboni, who, herself, is an incipient poet, says she sees the magazine as a way to make newcomers like herself “more comfortable with sharing their work.”

The first issue is already out, and features Bernstein’s first published poems since his retirement at UPENN, alongside visual art pieces from the likes of Stephen Sturgeon and Boston-based painter Amy Sudarsky. This first offering is a fascinating array of artists and forms, but the exact format isn’t something Balboni and Mazer say we can expect to see repeated. Rather, the two want each issue to be “utterly different from the one that came before it.” The two promise that experimentation in typography, composition, and covers, along with variation in the types of poetry and art featured will make for a completely distinct aesthetic experience with each issue.

Issue 2 will be available this Friday, May 24th, with a series of readings taking place that same weekend. The first of these will be held on Saturday, May 25th at 4pm and will feature live readings by Ilya Kaminsky and Elizabeth Oehlkers Wright. The second of these readings will take place on Sunday, May 26th at 2pm.  It will feature both a reception for New York artist Andrew Singer, and an appearance from German artist Marcel Inhoff. Both readings will take place at Outpost 186, on 186 Hampshire Street.

You can find more information on the magazine, and order a copy for yourself here.