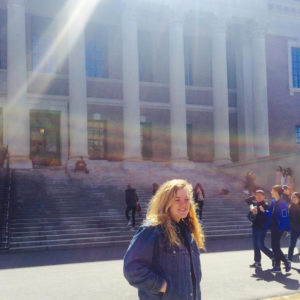 Suck City Sounds is a (new) Music Section series covering the most vital local singles from the greater Boston and New England area (and sometimes beyond).

If nothing else has become unignorably apparent from the pandemic, it is an overwhelming sense of place. How else might one react to being cooped up in one place, in situations of varying safety, for almost exactly a year now?

“massachusetts,” the second single off Boston-based indie rock act cadderwall’s mini-EP, fall 2018, was released at a fitting time—last Wednesday, March 10—even though, according to her Instagram, she recorded them pre-quarantine. Presumably it’s about something like arriving at college in the fall, as the release’s cover features cadderwall (aka Caroline Cahill) in front of what seems to be Harvard’s Widener Library; but the dueling themes of place and time run through it explicitly with masterful lyricism to boot, the track begs timeless (or, rather, timely) interpretation.

“I burn to see you coming,” Cahill croons on the track, “and i burn to watch you leave / i lose the hours dreaming / about you in between.” What cadderwall—aka Caroline Cahill—drives home time and time again on the track is an overbearing, inescapable sense of vertigo and isolation evoked by/from the pandemic. What has come, it seems, with the pandemic is a kind of all-hours “dreaming” she talks about on the track, cooped up, wondering, remembering about a pre-quarantine that feels so utterly and unattainably out of reach. Isolation and over-contemplation come hand-in-hand on the track, all concisely wrapped up in four-or-so minutes of moody, washed-out indie rock that begs the question many of us seem to be asking right now: a resounding “i wonder where you’ve been.”  It’s uncannily resonating for something written and recorded before the (a) pandemic became fathomable for most of the population. “I am not what you need,” Cahill assures us.

But despite the coincidental timeliness, in a much more macro sense, much of what Cahill explores here strikes a deeper political chord. “Oh Massachusetts won’t you look at me / Oh Massachusetts won’t you speak to me,” she implores toward the end of the track. In a grander and more self-reflective sense, this plea is familiar to many. The country—and the Commonwealth—have been pushed to the limit during the pandemic, revealing deep-seated disparities among marginalized populations (but as the Globe would tell you, that’s nothing really new).

Where is that Massachusetts? Did it ever really exist?

“WAIT! WAIT! STOPPPPP!” Are you fucking kidding me? I remember looking on in disbelief as the wall of sound around me dissipated into…