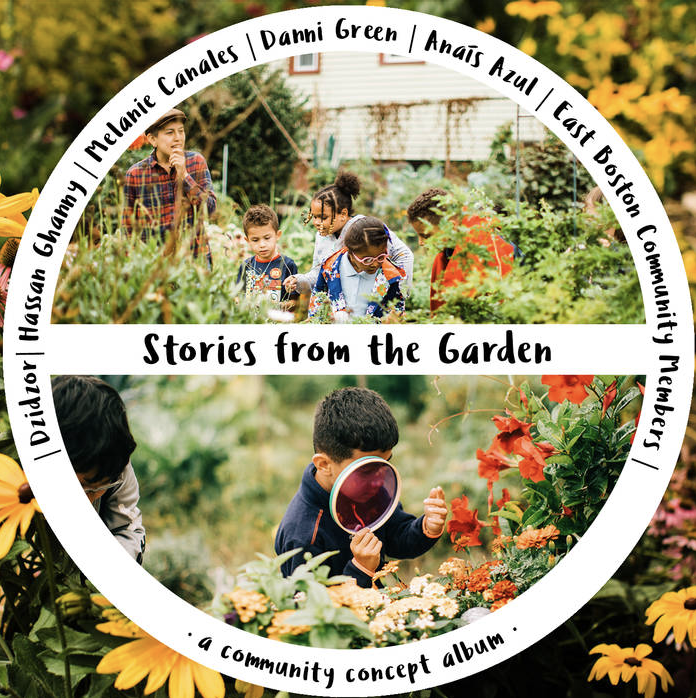 East Boston contains a thriving community of artists set against the backdrop of an ethnically and culturally diverse population . Most often, these destinations are a refuge for creative communities. Yet, this slice of the city is being quickly subsumed by the shadow of gentrification.

In fact, the Bay State Banner reported in June 2019 that new, unaffordable developments have come in recent years to redefine East Boston as one of gentrification’s new targets.

On September 21, 2019, something special happened.

Stories from the Garden is a poetic concept album which transforms community interaction and connectivity into a tool to stake a place in history amid the deluge of gentrification. This collection of musical, lyrical, and narrative performances – all of which took place on September 21, 2019 – is a surprising and subversive way for the creative community to maintain a place, however small, in Boston’s history.

Before understanding the value of this piece, one has to think about what happens to a community when developers, outside economic interests, and middle-to-upper class career hopefuls take aim.

Housing is the most obvious conquest. Whether it’s old buildings being knocked down or rising rents in once-affordable housing, East Boston and communities such as  , Jamaica Plain, and others have witnessed overwhelming “artist flight.” As a group of people who generally place more importance on creative expression over economic gain, they often find themselves rootless as the very ground changes underneath them from a place they call home, to a place someone else – with more money – decides they want to call home.

Ethnically-diverse communities and artists face many of the same struggles. Low-income communities one after another are victimized by economic injustice, and East Boston is no different. This is why many geographically minority communities are also rich in persons who consider themselves artists. The plain truth is that affordable communities are havens for minorities and the creative class.

Stories from the Garden is a self-produced statement against the sea change of gentrification. Members and allies of the Joe Ciampa Community Garden – musicians, poets, planters, and more – came together for a celebration of the two broad demographics that have traditionally called East Boston home.

It’s crucial to know that this is a collection of stories from voices often unheard in the larger arena of public discourse. For instance, “Rene: Gardner Interview” is an interview with community member Rene Marcuchi, an immigrant resident of East Boston who details the story of the community garden, and what it means to him. His speech opens up a track with background music―once he steps away from the mic, the music takes center stage, if only for a moment. In the background, melody and harmony give Marcuchi’s words a sense of place, raising it,in my mind, to the level of historical and cultural artifact. In this way, it’s much more than just a journalistic snippet, and it demonstrates the ability of music to make everyday life somehow beautiful.

Other pieces move away from the subject matter, as in the case of Poet Danni Green’s piece, “As I Rise.” One can only imagine that this performance―drawn from emotionally-charged, brave, and sensitive identity statements―is welcome in a place like the Joe Ciampa Community Garden. You can’t help but believe further that, in a small way, the nature of gardens as places of refuge from the outside, from the capitalist system that governs our food supply for instance, offers the same respite for the stirrings of our own souls .

Dzidzor, who was nominated as International Artist of the Year for the 2019 Boston Music Awards, offered two tracks to Sounds from the Garden. “Humm” is a meditation on being enraptured by something ineffable, interspersed with a ruminating melody that lets go and takes over the narrator and the audience in cycles.

Hassan Ghanny, a poet and writer whose mission of giving voice to underserved diaspora communities is a welcome and altogether poignant piece to this album, makes perhaps the strongest statement in their poem, “A Soil of One’s Own, Pt. 1,” as it reads:

“When you are uprooted,

You do not lose the ground,

The Ground loses You.”

In perhaps the most obvious and outspoken example throughout Sounds from the Garden, Ghanny offers a hopeful call to action against the submerging tide of gentrification.

Stories from the Garden is a musical piece. Singer and musician Anaís Azul’s piece, “In the Garden”, is a jazz-infused folk ballad strong enough to make the entire album hard to pin down as strictly “poetic.” This track anchors the whole piece in a middle space that I can only describe generally as “art sound.”

This album is very much a statement of place, a proof of existence amid the changing identity of Boston as a destination in constant conflict with itself. It’s revolutionary because it underlines that removing diversity through gentrification is not an evolution, in very much the same way that over-sanitizing ourselves makes us more susceptible to disease. It fights against change mistaken as evolution. In short, gentrification makes us weaker.

Without overtly saying so, Stories from the Garden professes that the vitality of individuals can only be preserved through the production of art, and the celebration of creativity’s power to give identity to humanity in all its various forms. Capitalist progress is only progress for an anointed few, so uplifting the voices of minorities and creatives―in the place where its very existence is a celebration of these communities―through a medium as organic and unstructured as the human condition itself puts stakes in the ground for the rest of the world to enjoy, and find liberation through expression.