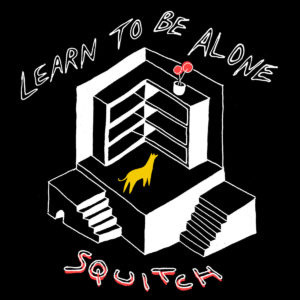 When I heard “Egg,” the first track off of Squitch’s Learn To Be Alone, I felt a little unsettled. Maybe it was the odd, lilting time signature or the jumpy guitar line, or Em Spooner’s yelping vocals. Certainly the lyrics “Excavation site in my bedroom / Dust off my skull from / When I was an actual person,” didn’t fill me with warmth and fuzziness. But I also felt understood. In the past almost-year, I (and, I think, many others) have found familiarity in the wonky and off-kilter. Cooped up with inordinate time to devote to the racing, semi-irrational thoughts in our brains that now get a lot more credence than they probably deserve, we’ve all gotten friendlier with the unpleasant stuff that bubbles up from time to time. (This is probably the right time to clarify that I did like listening to the song.)

As applicable as the album’s title is to our current collective afflicted state, Learn To Be Alone was not created in response to COVID life. All the songs were written in 2019 or earlier, and it was recorded in early March in a Western Massachusetts studio, just before the world shut down.

“sometimes i feel like these songs come across as too on the nose with what so many people have experienced through the pandemic,” drummer Denzil Leach told me over an email,  “especially ‘sink ,’ that one alone i wish could just have a big ‘pre-pandemic’ disclaimer.”

They have a point. It’s hard to listen to “Sink,” with its references to sanitizing, scrubbing, and quarantining, and not hear it as pandemic-inspired. At the very least, current events seem to have added a new and unintentional layer of meaning. But Leach and Spooner’s apprehension towards this new meaning is also valid, given how personal the lyrics on Learn To Be Alone are. The 11 tracks find Squitch’s members ruminating on mental health, relationships, feelings of isolation, and dysphoria.

Learn To Be Alone reminds me of that cathartic and dizzying moment when you realize that you’re alone, free from constructions and expectations, and that you can sing loudly and poorly, dance angularly, and do all the things that in public would deem making a scene or a fool of yourself. In some ways it’s a lot like the purpose that punk and punk-adjacent music has always served: You can do whatever you want, you can jump and yell and headbang without care, not because you don’t have problems, but because in that moment, you’re present with the music, or exorcising yourself of those issues.

“i like to think that the combination of the themes in the lyrics with the pretty visceral music could be cathartic,” Leach continued. “like maybe you can relate to the feelings of being stuck and alone, but it’s a sort of release to be able to headbang a little bit to it rather than just driving you further into your sadness.”

Squitch is not a ‘70s punk band. Taking influence from post-hardcore, math rock, indie music, and pop, their music is more technical, filled with intricate rhythms and complex guitar riffs. Learn To Be Alone is polished, but its dynamism keeps it from sounding overly flattened by professionalism.

Maybe the best example of the band’s ability to toe the line between DIY and professional is the track “Kaleidoscope.” The only track to feature Leach on vocals, the verses on the song sound like a live show, as Leach’s voice swims in a pool of echo and feedback squeals. On the visceral chorus, Spooner screams, “Maybe that’s why you left, nothing to latch on to.” In contrast, the pre-chorus, also sung by Spooner, is tender and quiet, but slots in seamlessly to the otherwise noisy track.

Most of Learn To Be Alone was written while Spooner, Leach, and bassist Emma Jane were practicing for live shows. They wanted the tracks to represent what they sound like when they play together, something they felt didn’t come through on their last album, Uncle Steve in Spirit. Cohesion is certainly not an issue on this project. Spooner uses the same alternate guitar tuning for much of the record, which makes the riffs all feel like they exist in the same “harmonic world,” as Leach described it in an email. If anything, some of the grooves on Learn To Be Alone border on sameness when the album is consumed in one piece, especially in the middle portion of the record.

For the most part, though, there is enough variation to keep your attention. Emma Jane’s lead vocals on “Part of Me” and “Night Star” offer a comforting departure from Spooner’s voice, which is emotive, airy, strained, and occasionally wobbly. It works well for this record, adding a vulnerable quality, but it’s nice to get a break. It’s a dynamic I would’ve looked forward to Squitch expanding on in future releases if this wasn’t Emma Jane’s last release as part of the band.

Even though some songs sound similar or follow similar structures, like “Keep It Inside” and “Rut,” Squitch adds variety by creating songs that feel emotionally or tonally different from each other. “Sink Into The Sand” uses a softer acoustic palette and is probably the closest thing on the album to a ballad; “Splintered Gaze” is loud, frantic, and grimy. And then there are energetic songs, like “Pretty Boy,” my favorite on the album. High-pitched strums give the song a driving momentum and a feeling of sweetness. Spooner and Leach wrote it together, and the track deals with dysphoria getting “in the way of feeling fully present in relationships even with the people closest to us.” I must admit I’m a sucker for songs that feel happy until you start really listening (think “Baby Britain” by Elliot Smith) and “Pretty Boy” captures that emotion while also leaning against it lyrically: “How do you tell someone you love that they don’t know you?” Spooner asks. In the end, “Pretty Boy” is able to tell a more nuanced story than a song that is all negativity or gloom. There are moments of beautiful imagery “The sunlight scattered through the shades / This place is home to,” but they end up clouded by the disconnect dysphoria creates “A perfect feeling you can’t shake / But I’m not with you.”

Honestly, it felt freeing to discover that Learn To Be Alone wasn’t about the pandemic. It has become so pervasive that it feels like almost all art coming out has something to do with the pandemic and current events, and anything that doesn’t have to do with the pandemic becomes some sort of guilty, willful escapism, wherein by so clearly not thinking about coronavirus, you end up thinking about it. Learn To Be Alone is about pandemic-adjacent issues but it also invites to headbang in the face of all that fuckery.