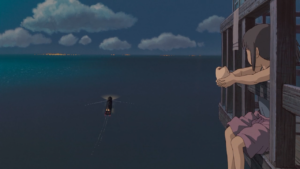 Spirited Away is a faraway dream that you half-remember when you wake up from a deep sleep; it evokes a raw, uncanny nostalgia for a place you have never been. It’s the world of imagination you left behind when you grew up. It’s the essence of childhood, tucked away safe in the deepest corners of your mind. That’s the best way I can possibly describe Spirited Away. It’s almost difficult to. It’s magic. Pure, beautiful, blissful, escapist magic, that makes you strangely wistful for the days gone by, when you still believed in magic and other worlds.

Beloved director Hayao Miyazaki unspools the spellbinding story of Chihiro Ogino, a young Japanese girl on her way to her new home. Irritated and afraid at the aspect of taking on a new town, friends and life, Chihiro hopelessly lays down in the backseat of her parents’ car as they head to the new house. Running late to meet the movers, Chihiro’s father takes a shortcut and ends up deep in the woods. They arrive at a tunnel within the thickening trees, which leads them to an abandoned amusement park across a wide, lush riverbed. Seemingly empty but filled with food, Chihiro’s parents begin to eat. Chihiro and her parents have unknowingly entered into the spirit realm; she stumbles upon a bathhouse brimming with creatures and spirits. She meets Haku, a young boy who warns her that she must leave before sunset, but she is too late. The riverbed is now flooded, and her parents have turned into pigs.

Terrified and alone, Chihiro finds Haku and asks for help. He guides her to ask for a job at the bathhouse, run by the cranky, mean-spirited witch, Yubaba, who steals Chihiro’s name and renames her Sen. Haku warns that if Chihiro forgets her human name as he has forgotten his, she will never leave the spirit realm. Chihiro must navigate through this frightening, magical world and work to save her parents before it is too late.

Spirited Away is unlike any film I’ve ever seen. It’s magic on a reel, and you can’t get any closer than that. The writing is impeccable; the sense of nostalgia and the sense of wonder is otherworldly. The visuals of the film, as well as its soundtrack, are stunning as well. A night train gliding through dark water and a horizon dotted with neon lights, among other beautiful scenery, is the backdrop of Miyazaki’s film. Joe Hisaishi, the film’s composer, creates a tear-jerking, memorable score that encompasses you and won’t let you go.

Miyazaki is a master storyteller, one of the greatest in the world, who knows how to make a film with true heart. Spirited Away is one of those rare films you see throughout your life and you know, you will never forget it. It stays with you forever.

Don’t miss how it was meant to be seen: on the big screen, in its original Japanese version. Don’t miss the showing of Spirited Away at the Museum of Fine Arts.

Screens Friday, 2/7, 8:00pm @ Museum of Fine Arts
Part of the ongoing series: On the Fringe: Adventures in Cult Cinema