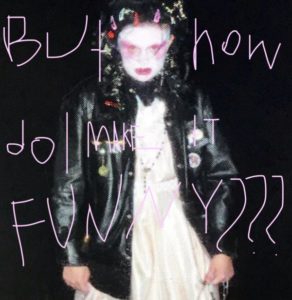 Sparklingspit’s new 10 track LP is a shifting mass of incredible weirdness and sheer freakiness. Distortion drips over and saturates BUT HOW DO I Make IT Funny??? completely. The sludge is palpable in the air as you listen. throughout the opening song, “All the Fingers in My Hands,” harsh synths homogenize with the guitar, melding together into a mass. In other tracks like “Chug” the guitar lick turns acoustic, cutting over the synths to create the doom subgenre of neofolk. The sound is clear and poignant, each note feels soulful and organic. Luc’s voice crawls through the cracks in my wall, saturating the corners of my filthy room. Their voice is distant and airy, floating through each song even when covered with grimy effects. Luc’s voice remains a constant in this album, creating a tonal midpoint between the near-industrial electronica and the incredibly clear acoustic guitar. The three distinct layers work well- the separation in their sounds only works to create a full sonic experience.

Weird vocal samples work as the transitions between tracks, breaking up the sludge and letting it give way to acoustic guitar or the bright synths on songs like “Tar.” It’s all incredibly eccentric and bordering on theatrical, exactly what you’d expect from a Sparklingspit release. “Has there been a crime here recently?” Is a memorable one, straight from the start of “Tinsel,” it’s pretty funny, especially leading into the dark americana sound that permeates the track.

Luc’s lyrics are off-putting in the best way possible, chunks of text spewing forth like a well thought out game of exquisite corpse. They flow like a rant when read, but are broken up into wistful complaints and dreamlike thoughts on the tracks, sometimes so embedded in the music you don’t realize their content.

BUT HOW DO I Make IT Funny??? also has a brilliant build- especially starting at “Chug” and “Ophelia,” both more low key, more guitar leaning, but the industrial grime builds up until “The End Is Near” an absolute killer track that pulls together all the distorted sound into one brilliant cacophony, from brutal guitar to lo-fi vocals that weave into the harsh background (and samples that might be dogs barking run through some synthware?) the track is a brutal experimental bloodbath, a whole motherfucking climactic moment to the album. It peters out into “Slowly Coming Back To Stillness” which sounds exactly like what you’d expect.

This album is a sludgefest of doom-y americana, and deserves your whole attention.

This is what Radiohead thinks they’re making, but they’re way too straight to even come close.