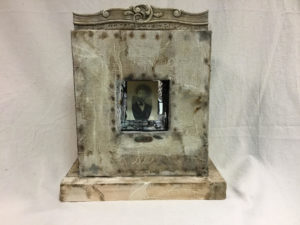 Sorin Bica says their collections are complementary because there is something resilient in both of them. Like Bica, blushing and leaning modestly against the wall to elaborate on the simplicity of the themes within his paintings he describes as just hitting him, the strength in both artists’ works comes from an ill-defined plainness about humans. They’re hopeful because of the unremarkable quality it takes for a person to stay standing at the end of the day despite every way it may have went wrong. While Bica’s pieces represent aspects of living that conversationally either go unmentioned or are taken for granted, Steve Martin makes the ordinary into something special by building shrines to commemorate spliced personalities of people long passed with provincial jobs he’s imagined for them. 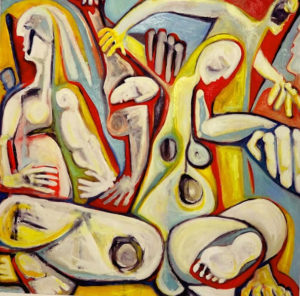 Sorin Bica – Where We are Running

The most enticing part of this exhibition was the lightheartedness within each piece that nonetheless maintained an amiable seriousness. Hearing Bica describe the implications of Night Shift largely elucidated for me the themes that inspire his work to come across with good humor and seriousness in tandem. The piece, similar in style to one by Picasso with disarranged and abstracted bodies with simpler and softer features, focuses on the conversations held between musicians in a music ensemble during intermission, something so present and readily observable but almost never important enough to notice. Bica wonders if these moments are often more important than what people choose to call their lives. 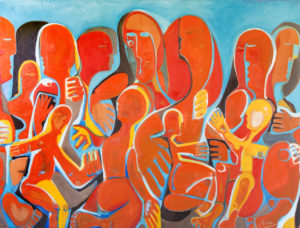 Sorin Bica – We Are All Mothers

Characteristic of Bica’s work is its departure from directly addressing controversial issues, opting instead to ask his audience to reconsider the subtler aspects that may motivate them. His paintings offer a gentler commentary on matters still serious. We’re all Mothers – inspired by his relationship to his sons – Mending – a nod to the natural human need to persevere through a struggling marriage that begins with a simple touch – and Where are we Running – a musing about the nowhere people make such haste to reach – are three more works that harmonize the lighthearted and the serious to consider quiet aspects of humanity with a thought-provoking and hopeful approach. 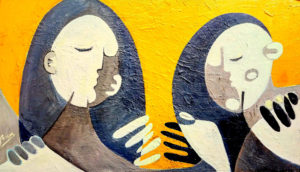 Martin’s works were relieving for another reason. When I asked why Family Tree of Thee – an assemblage including four characters with eyes for buttons and miniature faces for ears – was his favorite piece, he said, “it’s just so fuckin’ weird.” I asked him if there were underlying tones of vanity, reverence, pride, in the shrines he crafted for these characters, and he said, “no, I just like making these stories.” When we later walked up to Birkshire Institute, after taking a closer look at the face, he laughed that he’d forgotten to splice her face, but quickly moved on. The Blucus Brothers – a tribute to a pair of electricians – got their name because it sounds lyrical, still with a phonic relation to electronics. He wasn’t simple, but his concepts were, and that is where his pieces found strength. He was so proud to share the narrative of these electricians, the town clerk, the carnival barker, and the preacher, and his appreciation for their average lives was more inspiring than any response my over-eager questions hoped to gain. 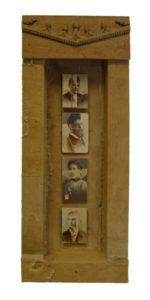 Both Martin and Bica create compelling works by listening to how the materials want to cooperate or by lending control to stream of consciousness. They demonstrate that sometimes a more passive approach creates the most honest art.

Bica’s art says, “this is how beautiful humanity is, for these quiet reasons you’re too busy to notice within yourself and the others gathered in this room.” Martin’s work says, “this is all there is, an ordinary face with an ordinary job, and aren’t they wonderful?” Their styles are vastly distinct from one another, but pair well for their shared theme of human resilience that make the mundane so remarkable.

On View at Fountain Street Gallery in SoWa until 4/29

Liked it? Take a second to support Sara R. Bass on Patreon!