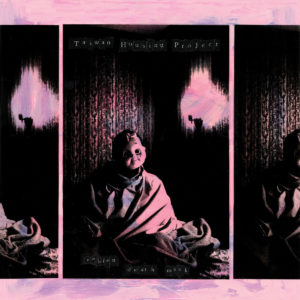 I take comfort in controlled, concerted chaos. There’s a certain degree of intrigue that arises from music that doesn’t feel like it should induce methodical toe-tapping in its apparent jaggedness but then the ball of your foot starts to rise and fall and your’re like “oh shit!” where’d that groove come from? At the risk of sounding reductionist, noise rock in general tends to grab the listener by the throat and demand their attention in a way that’s unlike other sub-genres but the newest track from Philly’s Taiwan Housing Project that we’re premiering right here on the Hassle courtesy of the legendary Kill Rock Stars takes it a step further by leaving you yearning for another taste. “Multidimensional Spectrum” from the bands forthcoming debut LP starts off with a steady build of grungy guitars and militaristic drumbeats that step back and allow frenetic shots of free jazz-esqe sax to poke holes through the discordant wall of riffs and shine through as the welcome focal point. Similar to PVD’s Downtown Boys but with a slightly more measured tone and California’s MANSION without being over the top, THP finds the mark each and every time. Aesthetically, NYC’s PILL also comes to mind but it’s Kilynn Lunsford (ex-Little Claw) whose haunting delivery won’t let you push pause. The groups other members who cut their teeth in legendary bands like Harry Pussy and Tyvek blend seemingly disparate sonic elements into a corrupt cocktail of erratic regularity that coerces you to the dance floor. Over in just two minutes, the track is certainly in the vein of punk without feeling cliché, repetitive, or overblown while the songs ascent and subsequently abrupt ending only leave you begging for more. Lucky for you, we’re just sticking a toothpick in this free sample – you can gorge on the entirety of “Veblen Death Mask” when it drops on May 5th in just a few short weeks.