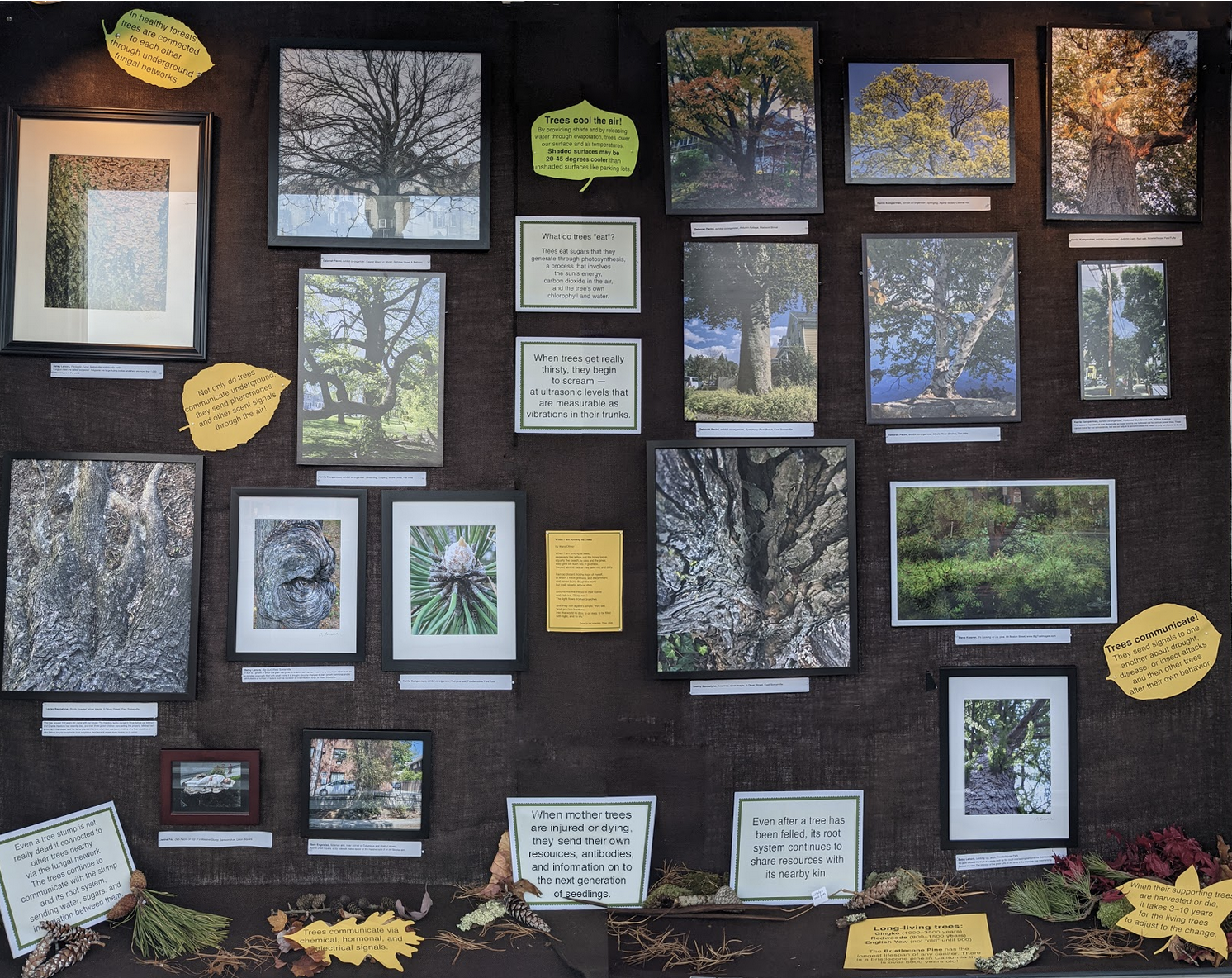 After her mother died of cancer, Somerville resident Kerrie Kemperman took comfort from studying the peaceful leaves of her neighbor’s tree, until a few years ago when a chainsaw tore it down. She began noticing how many more trees were unnecessarily destroyed by storms or experienced harm across the city due to human action. Sadly, this relationship with trees is woven into Boston’s history–as far back as 1876, the Great Elm in Boston Common, now commemorated with a plaque, was known as the city’s oldest resident until it was torn down.

“I reached out to friends, neighbors, strangers across Somerville asking for their favorite trees or oldest trees they knew of in the city,” Kemperman said. “I would go out and photograph the trees, sometimes multiple times over different seasons, and in different light. I also wrote down what information I knew about various species of trees, did research online, and read.”

To raise awareness and preserve the trees, she soon applied for an artist fellowship from the Somerville Arts Council to create ROOT (Recognizing Our Oldest Trees), a sidewalk exhibit displaying photos by Kemperman and other local residents of Somerville. Posted in the front windows of a CVS in Davis Square, the exhibit, which also includes fun tree facts about different species, and collected leaves and pine cones, is viewable from the sidewalk through the end of January.

“I worked on this project for nearly a year before discovering another Somerville resident, Deb Pacini, doing something similar on her blog where she documented the city’s oldest trees,” said Kemperman. “She’d formed an environmental group, and we discussed creating an exhibit of our two collections of tree photos.”

As Kemperman and Pacini joined forces with other locals passionate about our natural neighbors, one woman’s effort to raise awareness of trees grew into a homegrown artist collective meant to increase awareness of how much trees communicate underground, feel pain, and provide oxygen and pheromones to city residents. When COVID-19 impacted the group’s original plan to host speakers and events geared towards children to promote respect for trees and the broader natural world through the Somerville Public Library, they were thrilled to have Heather Balchunas at the SAC invite ROOTS to join the Inside-Out Gallery in Davis Square.

Why trees? “When every branch and twig has space to reach-reach-reach and gather sunlight, it’s just the most beautiful thing,” Kemperman said. “There’s a weeping willow down the street from me that lost about half its height in a severe windstorm a few years ago. But I still love how the afternoon sun shines on it, how it changes colors with every season, and the way it drapes over the sidewalk. Another local favorite is the copper beech on the corner of Summer Street & Belmont Street.” 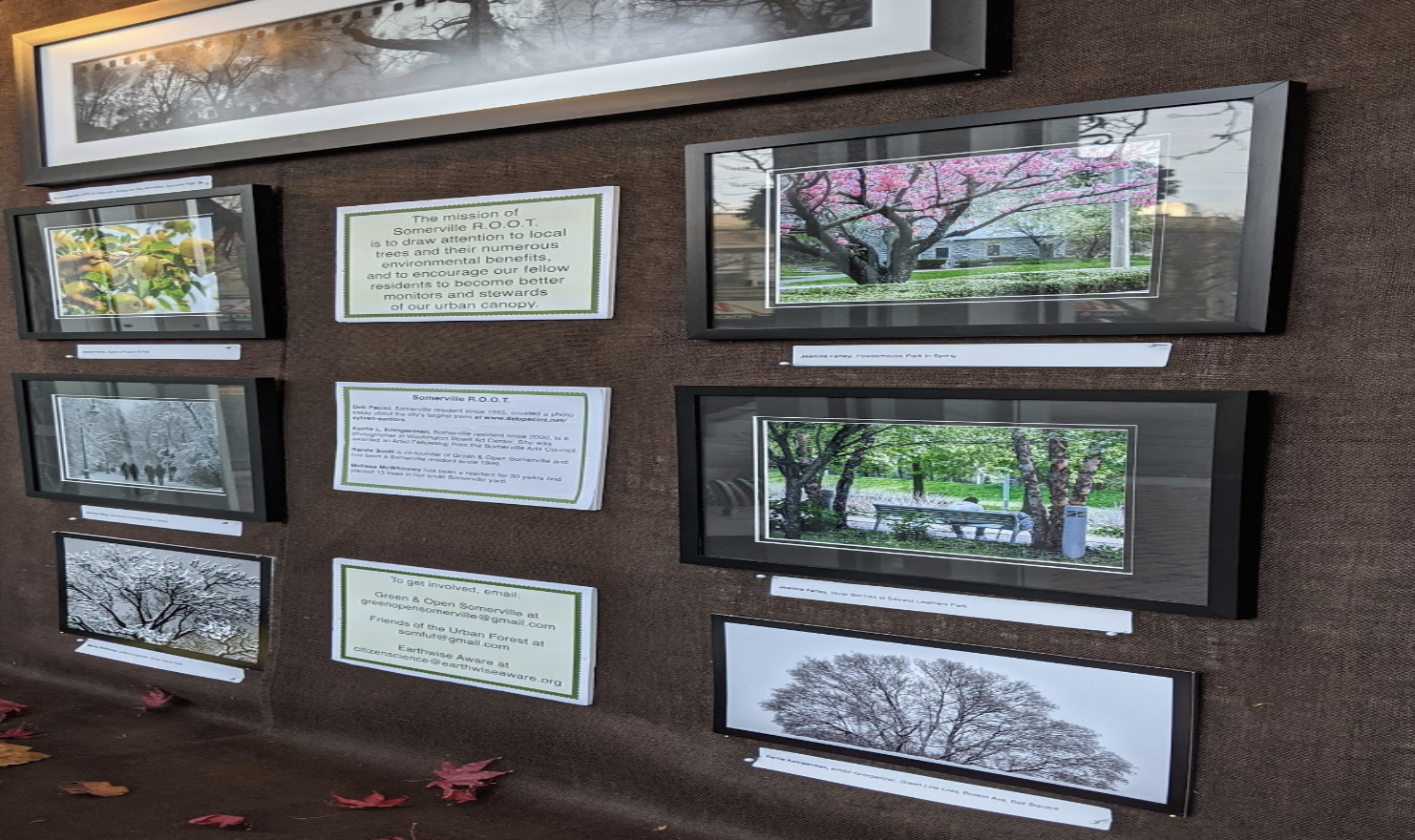 Though this exhibit presents many of the city’s oldest and most aesthetically-pleasing trees, it also highlights an important point: like many cities around the world, Boston just doesn’t have enough–and though it may be interesting that John Hancock planted two English elms on the Common, even trees without connections to historical figures carry major significance! Beyond being calming to look at, trees provide oxygen that benefits people with asthma, and their peaceful shade can cool the environment anywhere from 20-45 degrees. Understanding the broader climate benefits of adding trees instead of taking them down would also help the city battle climate change, which itself inhibits tree growth by causing disasters like wildfires and floods, and allowing tree-eating insects to flourish.

This would be particularly beneficial in neighborhoods like East Boston, which has the lowest percentage of tree canopy coverage in the city. Due to reduced shade, more hot spots can develop during summer, leading to greater risk of heat stroke and other medical problems for people. More tree coverage has been linked to lower rates of disease and overall better health outcomes. See maps of Boston’s tree coverage, and how it links with various other social issues here.

Boston has a long way to go in ensuring tree survival and climate equity in response to the current inequalities, but the ROOT exhibit is a start. The Davis Square space also provides contact info for other local pro-tree groups, piles of leaves and pinecones. The most powerful photos display trees that have been hollowed out for power lines, grow through chain-link fences, or continue to thrive despite other adverse human intervention.

While gatherings are restricted due to COVID-19, sidewalk exhibits like ROOT provide a great way for grassroots (pun not intended) groups to educate the broader public about important issues that may otherwise go unnoticed. Kemperman and Pacini aren’t sure what’s next for the collective, but they plan to highlight individual trees, especially the most beautiful and old, on their Facebook page, where visitors can also learn more about the individual photographers and their interests in and commitments to protecting trees in all their varieties.

“Some trees I appreciate for their shapes or colors,” Kemperman said, “others for how they bend or how their leaves sound in the wind, and still others for the shade they provide. I pay attention to trees because I value them. the truest expression of life.”

That being said, it sounds like these trees are worth protecting.