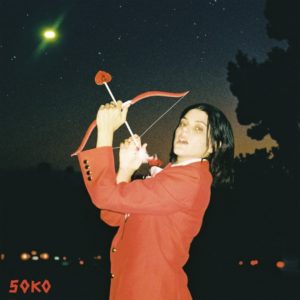 L.A.-based French songwriter Soko’s new album, Feel Feelings, is a sobering pat on the back, a much needed call from a friend. Though marked by moments of twee and tenderness, Feel Feelings avoids being a carefree jaunt—quite the opposite, actually. From its dizzying production to its raw lyrics, Soko is asking us to find it within ourselves to, well, feel feelings—good or bad.

Soko, a Grammy nominee, cooked up her latest album shortly after birthing her child, Indigo, and surviving a case of COVID. To say her life’s been uncomplicated would be an outright lie—and that complexity is present in Feel Feelings. The album picks up with crisp muffled drums and honey soaked guitars in “Are You A Magician?”. Much of the album presents pleasingly lowkey vintage-sounding guitar pop with direct nods to the artifice of lo-fi. “Being Sad is Not A Crime” gives us just what a fan of the jangly, bendy, chorus-drenched guitar would love—though dialed up with key changes and lovely soulful harmonies.

The lyrics on Feel Feelings range from nurturing to outright challenging. “Looking For Love” is a practically axiomatic of-the-times love song. Examining the capital of romance and desire, Soko croons: “I got an offer, it will be a vision / Looking for monogamous love / I’m free on Friday / And maybe Saturday”. We vie for all others’ affections while simultaneously budgeting our time and money—not unlike a business transaction. On the other end, she plays with ideas of space—closeness and distance. On “Don’t Tell Me to Smile”, Soko barks in a burlesque baritone, demanding the listener to look away—reclaiming much needed space. It’s relatable.

Soko’s vocal range and personality add a great deal to the warm and sometimes trippy instrumentals. Just as the songs reach their theatrical codas, Soko embellishes the song with her charismatic presence. In the bridge of “Being Sad is Not A Crime”, Soko reintroduces her soft voice after roughly 30 seconds of mellotron—a subtle but powerful and wonderfully twee moment. By the third track, “Blasphémie”, the album’s variety becomes more apparent as Soko sings in her native French in the midst of a sultry waltz. The stylistic shift here is welcome and a testament to Soko’s versatility.

Feel Feelings is an emotional album and whether it feels relieving or draining truly depends on the day. No matter what, the album feels gratifying—if slightly challenging to sit through. Soko gracefully bears it all in a collection of songs neither trendy nor rote. A band-aid to some, and a mace to others.

Tags: "Are You a Magician?", "Being Sad Is Not a Crime", "Blasphémie", "Don't Tell Me to Smile", "Looking For Love", Andy Dion, Babycat Records, Emotional, Feel Feelings, lo-fi, Soko