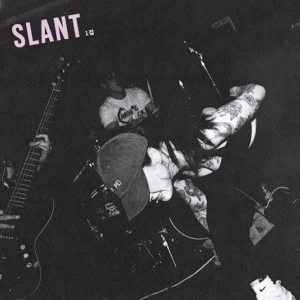 There’s no denying anymore that fast hardcore will always reign supreme in the realm of hardcore music as the genre was defined around the notion of songs being short, sweet and played at tempos that ignore all speed limits. Slant, a South Korean hardcore band, have thrown their hat into the ring and shown that this hardcore stuff ain’t just for Western Civilization, nor is it just boys fun.

Blasting out of Seoul comes the sounds of Slant with their first wave hardcore influenced speedcore that pummels the listener with the desire to get up and two step, stage dive and run around the mosh pit like a rabid pitbull. The band takes the classic approach and makes it palatable to the modern age through sheer power and the venom in vocalist Yeji’s delivery. The recording quality may set the songs apart from the classic hardcore albums of yore but it only elevates the 17-minute-long affair. The guitars pummel the listener with left and right hooks, the bass is rattling your eardrums along with the drums, there’s nothing but passion in the entire band’s playing and it’s palpable from the onset of the opening track.

“Enemy,” the album’s first track, initiates the chaos of the record with some guitar riffing from axeman Gunny, swiftly building up some tension before Yeji initiates the chaos with a howl then the album is off to the races. The scratching guitar tones and indignant delivery of the lyrics make one think of the hardcore classic “Nervous Breakdown” by the mighty Black Flag, the influence here can’t be denied and there’s no shame in it either because anyone who doesn’t move their feet to that track just isn’t human.

There’s a true appreciation for the old testament of hardcore but a youthful energy that doesn’t anchor Slant’s 1집 to the past. The band certainly evokes the kind of energy that requires a healthy body as the desire to two step and caveman to the songs is felt during all ten of the albums tracks. These aren’t songs that you can just get a few cheap crowd kills to, those people may require a breathing apparatus if they tried stepping into the pit for a Slant show.

If you’re looking for the most thought-provoking, emotionally in depth and imaginative album in the world then you can take your stuffy ass over to the coffee shop because Slant’s debut album is hardcore in its rawest and purest form. The album is not here to reinvent the wheel but it breathes new life into a classic sound and energy that brings young people to shows and could even attract the attention of old heads who typically write off any music that hasn’t come out in thirty years. If you want to be brought back to your early punk and hardcore listening but also enjoy a fresh new take on the classic blueprint check out Slant’s 1집 and any of their other recordings for that matter. This band does not disappoint.

Liked it? Take a second to support Ryan O'Connor on Patreon!