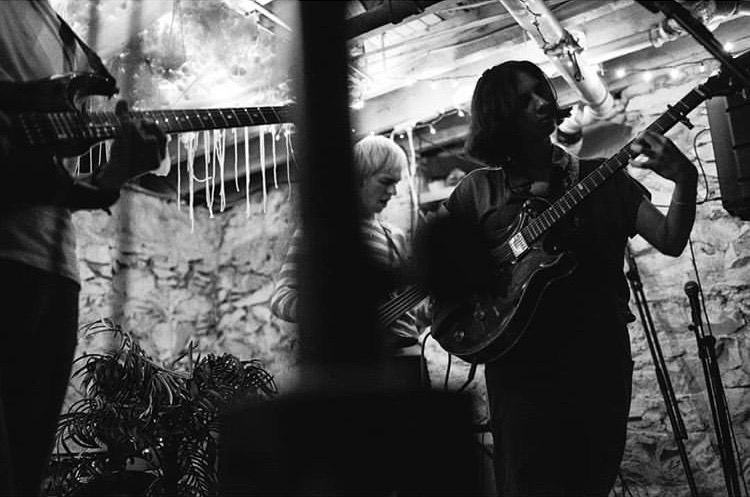 The newest release of Allston mainstays Raavi and the Houseplants, “Shoulder” commands bouncing guitar lines that ebb and flow like the waves themselves. Following their tradition of bringing math-rock inspired dual-guitar emo to the Boston scene, “Shoulder” embellishes a simple guitar line to create true, heartfelt emotion. Raavi calls this track “the closest thing to a love song we have,” fitting for a ballad to all the words left unsaid.

Raavi and the Houseplants draw inspiration from a host of musical artists, in spirit more than in sound. “I don’t think we sound like them” Raavi said of Brooklyn Emo Die-hards Big Thief, “But the parts Adrienne Lenker writes have always been very inspiring to me.” From Big Thief to funk music and surf-punk, “Shoulder” draws on a rich tradition of American music, while staying true to the band’s own style and sound. “Someone once called us Emo-Lounge, and I just really vibe with that.” A fitting title, given the guitar driven songs that feature major sevenths and major ninths, commonly known as “jazz chords.” These chords create sprawling soundscapes that back up genuine lyrics.

“Shoulder” fits that lounge aesthetic. I can easily picture myself sitting on a large armchair in a dimly lit, smoky room while listening to this song. The guitar lick feels airy, flowing and filling the space around Raavi’s velvet vocals. The notes are smokey, yet bright. Raavi’s lyrics feel grounded: “This is my favorite Houseplants song I’m pretty sure, both to play and just in general. I’m proud of it.”

As Raavi looks forward to the band’s future, and the future of her sound, she assures us that it will still be unpredictable. “I don’t want to restrict myself. I’m not one of those people who’s like ‘Oh I have to write every day’ it just happens when it happens. Lately I’ve been so busy, I feel like I haven’t picked up a guitar and played for myself in like a month, which is kind of a bummer. I think once the album is recorded though…”

Look for their debut album release this Fall.

Nappy Nina wastes no time on Double Down. The album, released earlier this year, runs 9 tracks and clocks in under…