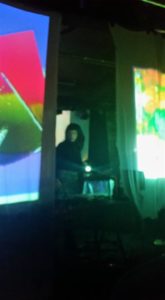 The Scanners Halloween costume party, “HorrorScan”, was filled with allure and amusement. Dan Shea kicked off the series over two years ago (with original resident DJ Ren Schofield, of CONTAINER/FORM A LOG) as a showcase for the increasing number of outstanding artists who are experimenting on the blurry line between rhythmic noise and electronic dance music. DJ WON’T (aka Will Mayo) took over resident DJ and main curating duties for the night shortly thereafter. Today, in my opinion, Scanners is the best electronic dance party going on in the greater Boston area.

The night buzzed with excitement as the lineup featured an eclectic mix of cutting-edge producers. I sat with Sitting Adult, whose percussion beats out like a crystal staccato. Getting the sense that Sitting Adult is modernizing techno, I sat down and talked with Isabella.

LB: When I first saw you, you were playing a gig at Svbstrvctvre//Boston. You were good. I never saw you before, but when I saw you perform, I was really digging your beats. How did you get into that?

I: My co-collaborator and I, BATHAUS, had conversations about how there’s been a lack of safe space in the city for women to have control over things that happen in club spaces or booking and playing shows. There hasn’t been a very strong community for that, and if there has been, it’s lacked aspects of having women in positions of power, being able to decide things, having women headline or having shows curated by women. Kind of taking women out of the shadows in the bedrooms of making music and bringing them on stage and having a community that is based around making people comfortable, welcome, and not judged in any way.

LB: When I’m part of the crowd and I feel it isn’t a safe space for me, it ruins my night. I feel degraded, insulted and humiliated. Scanners is usually a safe night for female dancers; it integrates both male and female performers. How did you feel being the only woman playing that night?

I: It was really interesting. The Boston Hassle hit me up with an interview before that show. I knew that even though that I had this interview with this great person from the Boston Hassle, that I was still expected to be the headliner and open the show. For me, it sucks sometimes, but I view that as just my own personal practice. Who’s there is there, and I appreciate them being there. I appreciate the opportunity to do that, but I also know that I have yet to be booked for a show where like I’m headlining or anything like that.

LB: How’s your fan base as an underground musician?

I: I feel lucky that I get positive feedback from people that, A) I really admire, and B) not necessarily know yet, but I admire their enthusiasm. It pushes me to want to explore things. I struggle with such self-doubt about what I create. To have someone come up to me after the show and say, “That was amazing” and “Thank you” — every little bit helps, I guess.

I: It feels like a never-ending journey. I always want to keep expanding and building my collection of gear. I definitely go through phases, using some things more than others. I think the biggest thing that’s been monumental to me was the Korg MS2000. It’s the first big piece of gear that I got where it opened my world to new possibilities and more experimentation.

LB: What do you think about being called multi-instrumentalist?

I: That’s a good question. I think it’s true. I mean, they are all instruments in their own right. I’m playing them all. And I’m programming them all. Sometimes I tuck my instruments into bed at night because I love them so much. It’s kind of weird, but…

I: I kiss my fingers and tap all of them before I go to bed and say “Thank you.” I really have a soft spot for that MS2000, but I also have a soft spot for the Roland Compurhythm CR-8000 that my good friend gave to me. It’s really special. The Korg MS2000 too; it’s versatile. I have a lot of gifted, weirdo guitar pedals that my Dad gave me. I like running my drum machines through those pedals just to see what it sounds like.

I: This, like, really crappy DigiTech guitar pedal that has about 80 different sounds. That has a whole range of sounds in it. It can sound really goofy, and sometimes I just do it to make myself laugh. You know if you, like, put a kick drum through a wawa effect, maybe like a flanger — it’s super goofy.

I: I really love the band Frak. I always talk about them. They’re from Sweden. Any artist who is able to explore all different aspects of music in a way where they can be silly, goofy, serious or sad.

LB: How many devices are there in your set?

I: Right now there’s about seven. It’s really interesting. It’s like getting a bunch of kids try to get along. They all try to talk to each other.

LB: Are you looking forward to performing at the Boston Hassle Fest 7?

I: Yeah, I’m super psyched. The whole lineup is incredible. Some of my favorite performers are going to be there, like Via App, Container and Terrence Dixon. It’s gonna be awesome!

LB: Are you only going to perform at the fest?

I: My boyfriend, Jesse Kaminsky, who’s a local artist, and I are also doing an installation in the Brighton Music Hall. We’re going to be installing a massive aluminum foil that’s going to have live projections happening with it too. Our idea is to transform the space into an alternate universe. We kinda pulled inspiration from old science fiction movie sets. The idea is to kinda just play with your sense of what’s real and what’s not.

LB: So looking forward to that. Sounds trippy.

I: It’s like being in a geode or a faceted diamond.

LB: Sitting Adult. Where did that name come from?

I: That name came from a comic book that my boyfriend wrote. He turned his grad school thesis into a comic book. I think it sounds a bit lazy for what I actually do on stage. I’ve recently been thinking that I’m going to be changing it to just my name, Isabella.

I: For now. Until I figure out a different name. I’m not totally satisfied with the name. 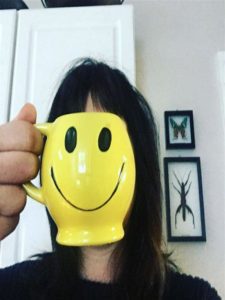 I also sat down that night with Patricia, another curiously-named performer, who, to my surprise, is male! He was chilling with his mate and fellow performer Jahiliyya Fields from Brooklyn. They are both signed to L.I.E.S. (Long Island Electrical Systems). Patricia is also signed to Opal Tapes. I began my conversation with the producer by asking about his name.

LB: When I first read your name, and heard your  beats, I thought you’re a female, why do you call yourself Patricia?

P: I’ve no particular reason. I like the name.

LB: But people would mistake you for female.

P: Yeah, that’s fine with me. I think gender is a liquid thing anyways.

LB: I love that. You think the name suits the sound?

LB: Then how would you describe your sound?

P: Beat-based music made with synthesizers and drum machines.

LB: What drum machine do you use?

P: No, I’ve been making music for a long time, but performing perhaps four or five years.

LB: Where are you based?

P: I live in New York, alongside Jahiliyya Fields in Brooklyn.

Turning to Jahiliyya Fields for the next question, I spontaneously asked him…

J: Pure coincidence that I look like someone else to you.

LB: No. It’s the ‘stache. Is it because it’s Halloween?

LB: What do you mean by disfigured?

LB: Just like Ministry’s “Everyday is Halloween”. I thought your beats began dark. Why the darkness?

J: Here we are. There is something that tells you the light is there. It’s the darkness.

LB: But then your beats pick up and the crowd starts to feel your rhythm.

J: The witch wants a lighter.

Then I look to find Jahiliyya Fields lighting a woman’s cigarette dressed in a witch costume.

LB: Speaking of darkness, you gave her some light there.

LB: Your beats were dark in the beginning, then they turned into light. Why use this method?

J: Because it’s like shading. You don’t want to look at one thing all the time, you want a different color, later on, or maybe just a shade of light.

LB: When you picked up the mic, you shocked me.

J: I don’t know why you got shocked, that’s good. I like that part of it.

LB: Why add your voice?

J: Because I have human parts in the music.

LB: How about the words that you say?

J: They are usually about people that are around in my life.

J: I’ll take the fifth on that one.

LB: Have you been playing live sets for long?

LB: Where do you usually play in Brooklyn?

LB: When did you start tampering with devices?

J: For a while, or really a lot longer than that. Kind of like intuitive use of the synthesizer and then it kind of reined in the present form now, through a little bit more understanding.

LB: When did you sign with L.I.E.S., your record label?

J: I never signed anything. It was by verbal agreement.

LB: When did that occur?

J: Probably like 2011. I decided put out a record on the label for the first LP. It was something that was supposed to happen, I think of it like that.

LB: You put out your own stuff on SoundCloud?

J: Yes I occasionally do load up a SoundCloud.

LB: What does Jahiliyya, from your name, mean?

J: It means a place with no masters.

LB: Why? Most individuals want masters.

J: Maybe, but hopefully not at all time. 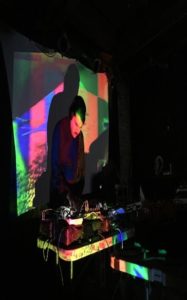 Liked it? Take a second to support Lady Bedouin on Patreon!