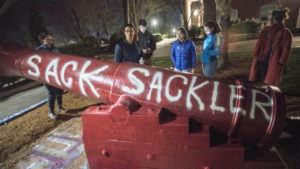 It’s been a shitty past couple of weeks for the organized crime family behind OxyContin.

The Connecticut-based Sacklers, whose Purdue Pharma banked billions on the backs of people who became addicted to its marquee painkiller, may finally be feeling the aggression mounting in long overdue response to their impact and influence. More than 200,000 Americans have died of prescription opioid-related overdoses since Purdue began recklessly and deceptively marketing Oxy, while the amount of residual death and despair the company has spurred beyond that is immeasurable.

As a result of so much killing, the outrage aimed at the Sacklers and their purse is perpetual—last month, three US senators, including Ed Markey of Massachusetts, sent a letter asking Purdue Pharma to commit to restraining from profiting off its latest endeavor: developing addiction recovery meds. But the blowback has been extra vigilant of late, seemingly since it came to light earlier this year that prosecutors in the Bay State and New York are gunning for company brass. As the New York Times reported April 1, “members of the [Sackler] family continued to push aggressively to expand the market for OxyContin and other opioids for years after the company admitted in a 2007 plea deal that it had misrepresented the drug’s addictive qualities and potential for abuse.”

Compounding the general negative reaction to such gross developments, last month saw three big moves against the Sacklers in the art world in which family members have used money to gain friends and benefactor visibility for decades. Following protests like one at the Guggenheim in New York in which demonstrators littered the museum with symbolic prescription slips, that institution, as well as the National Portrait Gallery and the Tate Modern Art Gallery in London, announced that it would no longer take Sackler drug money.

Locally, students at Tufts have ramped up actions that started around 2017, when campus publications began highlighting the ties between the hated family and the university, specifically in relation to the namesake Sackler School of Graduate Biomedical Sciences in Boston’s Chinatown. As more revolting information has come out, more members of the Tufts community have spoken up—organizing a petition, speaking at rallies, and last week painting the iconic campus cannon, an open canvas of sorts for various causes and voices.

“The stridency of the call is based on the fact that the information out there is so reputable,” said Nathan Foster, a recent Tufts grad who is helping organize Sack Sackler efforts. “When it comes to these kinds of connections, the fact that you can say that it’s real, and this influence is real … is really important to have when deciding how to improve institutions.”

A student who is seeking a degree in public health and who helped paint the cannon added: “I care about issues of addiction; it’s something I am particularly interested in in my field. When I found out the Sackler family was tied to Tufts I was literally taking a class about substance abuse and covering the opioid epidemic. It just felt so incongruous that a school that educated me and taught me to think critically and to care about the world was also funded by a family that precipitated the opioid crisis.”

In response to the ongoing controversy, Tufts Executive Director of Public Relations Patrick Collins told the Tufts Daily that the lawsuits against Purdue Pharma are “deeply troubling” and said the university “will be undertaking a review of Tufts’ connection with Purdue to ensure that we were provided accurate information, that we followed our conflict of interest guidelines and that we adhered to our principles of academic and research integrity.” The spokesperson has also pointed out that Tufts first jumped into the sack with the Sacklers long before OxyContin came on the market.

Despite all the damning cacophony, times don’t necessarily seem too bad for these billionaires. According to Forbes, the Sacklers are collectively worth about $13 billion, making them the 19th wealthiest family in America. As per reporting by the Deerfield Valley News and the VTDigger, this month it came out that some of them recently purchased an entire ski mountain in Vermont.

Meanwhile, in response to Mass Attorney General Maura Healey’s lawsuit, Sackler family attorneys filed a motion arguing the claims are based on “misleading and inflammatory allegations.” In a statement, the Sacklers smirked, “We are confident the court will look past the inflammatory media coverage generated by the misleading complaint and apply the law fairly by dismissing all of these claims.”

Some Tufts students are much less forgiving.

“I have very close family members who have been directly affected by the opiate crisis,” said Shane Woolley, a senior from Rhode Island. “They struggle with addictions that were brought on by the exact marketing tactics that the Sacklers used to make billions of dollars.”

Woolley recounted a conversation he had with a high-level administrator: “To their credit, they listened respectfully, but when I said that the bare minimum that they could do is take the Sackler names off of the buildings downtown, they said, ‘I hear you, but we have a lot of people who want us to keep those names on out of respect.’

“I said, ‘With all due respect, none of those people were likely affected, and they’re probably donors. They probably include the Sacklers. You should be listening to those who were affected.’”

This reporting was done in collaboration with the Boston Institute for Nonprofit Journalism and its F.I.G.H.T. Opiates project. For more information, coverage, and videos visit binjonline.org and fightopiates.org.

Chris Faraone is the News+Features Editor of DigBoston and the Director of Editorial for the Boston Institute for Nonprofit Journalism. He is also the author of four books including ’99 Nights with the 99 Percent’ and ‘Heartbreak Hell.’
This article was first published in DigBoston on 04/23/2019.  It is being re-posted here with the express permission of that fine publication.
Tags: digboston, student art, the war on drugs, tufts

This Week in Experimental Vol 79

Hello Experimenters! I hope this message finds you warm, healthy, and safe. This week, my students are getting into the real content…