I do not wish to discuss expected or unexpected plots or climaxes. I have not read Norman Mailer’s 1983 Ancient Evenings, that inspired this feature. I do know that the original setting in the novel was in pharaonic Egypt. I wish to discuss and review River of Fundament: Act 1 of this feature as pieces of artifacts; emphasizing the imagery and semiotics. We begin to witness a “Jesus” like figure, a corpse emerging along with another female corpse that has a cross branded on her chest. Then we begin learning about this figure, in “his” funeral. The imagery is very peculiar, not merely portraying common imagery about death, but more so that of  ritual. To be specific, of an ancient Egyptian variety. The influence of the Book of the Dead, among other concepts, is very much apparent. It might be obscure to some. The dead body, is a writer living in Brooklyn Heights. I was half dead till I saw the blood pour down her body and the symbol of christ branded on her bosom. The sliver liquid metal leaking on the table can bring the notion of alchemy into one’s mind. The forever writhing snake creeps among the funeral guests. The books and portraits, all conveying meaning. Many book titles were emphasized through the lens; if not zoomed in on. Candles are lit, dinner is served. A little young girl, or benevolent calf is included in the film psyche, deepening the threshold, before the typical Brooklynite hero falls into the abyss. The abyss is clearly portrayed as black-outs occur between the scenes. The flashes of the purple lotus is climactic, giving a sense of luminous rejuvenation. According to Egyptian mythology, the lotus is sacred to the goddess, as it gives birth to a divine child, the sun god Ra, carried in the womb. From that golden life arises. The revelation lays within Paul Giamatti‘s scene where he indirectly refers to the death journey in The Egyptian Book of the Dead. He appeared to be a fake mighty one with fear, what was referred to as pharaoh in character. The poor deceased mortal author wasn’t standing in adoration before a Sun-god, but in a dark funeral dining room with worms, served as a delicacy on their salad bowls. The serpent crawls freely, and the audience can gaze with discomfort at unattractive women fondling the pharaoh’s (or Paul Giamatti‘s) penis or balls. Salman Rushdie had to appear of course, because what’s a dead author’s funeral in New York or London without Rushdie? Rushdie proclaims his genius in major motion pictures, how genius is that? It would take more of a population, that doesn’t know about marketing and public relations in the literary world, to crack his appearance. As for Paul Giamatti’s revelation, it basically goes like this:

In the center of pain, there is radius…

Instead of trying to figure out the previous statement, I’d like to emphasize to the reader to listen carefully to Hathfertiti’s speech in the first act, played by Ellen Burstyn. River of Fundament is a cinematic opera presented in three scene chunks. Act 2 & 3 get more wild. I recommend this feature to those who wonder about death. Sacred lines are recited from the Egyptian Book of the Dead, yet, this masterpiece conveys the struggle in understanding or acknowledging semiotics, hidden symbols, holy, unholy, sacred or un-sacred scriptures. The film’s images contain both alarming, and mesmerizing images.

During the screening at the MFA, between Act 1 & 2,  BATHAUS played her live set. Her sound consists of haunting synthetic sequences for a dreamlike human reality. It engages listeners on many psychological and physical levels. BATHAUS’s music is a great blend of atmospheric synths and propulsive beats, all of it sounding spectral. She is a producer, and one of the originators of femme-focused collective Substructure. BATHAUS brings forth bleak beats and spooky soundscapes, combining the two. She has become a respected and formidable force within the Boston experimental electronic scene. 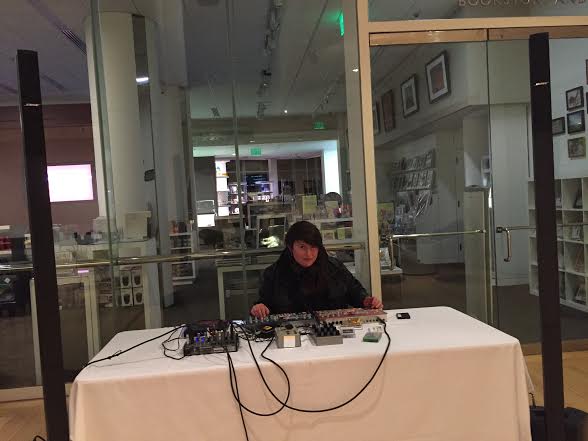