Wind River feels like the cross-fusion of an NPR tale spun around the grim fantasies of crime thrillers like Law & Order SVU. It’s compelling, don’t get me wrong, but there are times when Taylor Sheridan’s second foray into direction feels like it loses grip on its main point: highlighting the injustices faced by Native Americans living on reservations and, even more so, the unreported and ignored assaults faced by women living on these reservations.

Without pulling punches, this is the story of a Native American woman who was assaulted and left for dead, as told through the lens of two white protagonists trying to solve her murder. 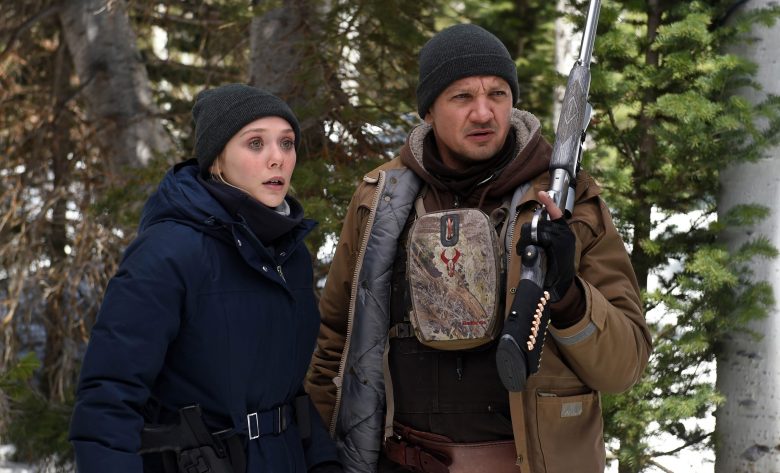 I refuse to tear into Sheridan’s work the same way I would another director approaching the project for some purposeful gain or through a more glamorous lens. As Sheridan explained in an interview with NPR, his motive for creating the film in the first place was to deal with “[the] issue with sexual assault against women on the reservation – I mean, it’s existed since the inception of a reservation system. But, really, in the past 15, 20 years, it’s exploded. And it gets no attention, which is the motivation for writing the film.”

It’s abundantly clear through the way Wind River handles its subject matter, and how Sheridan presents the film, that this is a topic he’s passionate about. I cannot speak explicitly about Sheridan’s politics, but the way he touts his project as the start of a larger conversation leaves me inclined to like the guy. Therefore, I won’t ignore the work he’s done well, but I will grapple some of the biases he’s left dormant in here, because I feel somewhat obligated to point them out. I will probably fly over some points that other viewers will find, and for that I apologize.

Let’s start by pointing out that Wind River is satisfyingly brutal. It does not release the pressure of feeling bad and wrong, nor does it alleviate any sort of tension stirred by its dramatic makeup. You’re meant to wince, to feel depressed, and, ultimately, to cry when Sheridan spurs the emotion of losing a loved one or facing an insurmountable wrong. 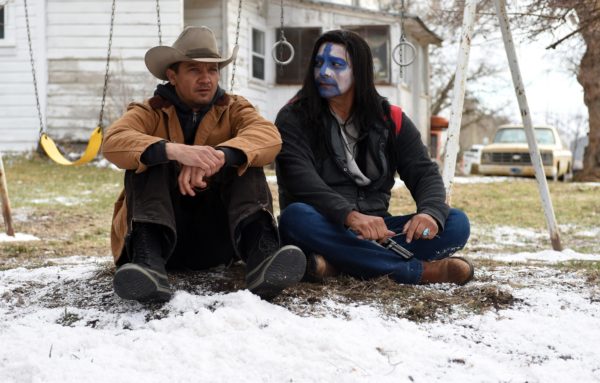 But, as Alissa Wilkinson explains, there are moments where you could think of the film as some “caricature of pain.” The full-throttle approach to showing everyone’s shittiest day starts to pull a viewer out in some ways, to the point where there are two moments in which characters scream in pain or sorrow and, personally, I didn’t know how to feel. Was that real? I wondered, starting to feel the false reality of this film. Life is shitty and this situation is real, but somehow the commitment to sorrow felt a little overwrought at points.

Getting past that gone too far tone is jarring, for sure, but I firmly believe that, once you get past it, you’re in for something really special. Sheridan uses a cinematic language that’s crisp and intentional, drawing back a haunting essence of Denis Villeneuve’s slept-on Prisoners (2013). He makes nature seem like a runner up to the darkness created behind closed doors, and uses sight as a way of hiding the next detail or building tension until the big reveal of a scene.

I think specifically of one sequence wherein some members of the main ensemble find themselves in a standoff between men representing state law and others representing federal law, the two of them knowing who’s in the wrong, but neither of them knowing who should pull the trigger on the other. Legal paradoxes like this are a subtle flavor in Wind River, something that I wanted to feel more of but which, in hindsight, feel appropriately used. 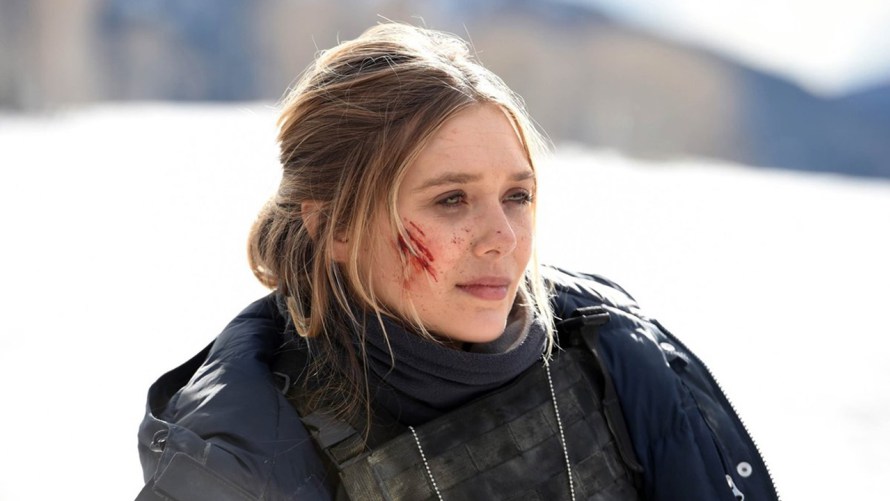 Then again, it’s legal jargon and understanding that leads me to one of my largest (and probably most ridiculous/most contentious) gripes with the film. Elizabeth Olsen plays FBI Agent Jane Banner, a young and wildly inexperienced person who often bumbles through the film in a way that makes me question what people really learn in the FBI. Early in the film, she explains that she’s the closest agent to the crime scene (Wind River in Wyoming) and declares very proudly that she’s originally from Fort Lauderdale, Florida, and therefore knows nothing about snow (and may not even know what snow is as a concept). Maybe I misheard what was going on here, but from a quick fact check, Las Vegas is about 11 hours away from where this takes place. Though maybe that’s that point Sheridan’s making about the availability of resources like federal agents on a reservation.

Banner feels clueless at times, something which I found both humanizing and frustrating as a viewer. I approached this knowing we’d find some character who grounds us in learning what Wind River, its people, and the unique culture around it are all about (that is, the weird and estranged relationship between reservations and the surrounding state), but to find someone who is so blatantly looking into the camera so early on and saying lines that convey a message of “Hey, audience, here’s why this is fucked up!” was a tad on the nose.

This gripe aside, Banner proceeds to be a fascinating addition to the ensemble, offering more than her clueless introduction lets on as she brings pathos to the screen and looks far more like someone just trying to do the right thing. She’s nicely flawed in a way that contradicts the logic of her character – an FBI agent detached from the situation at hand – but I think Sheridan, while needing to brush this character up a bit, did a decent enough job in presenting someone delightfully weird. Also, I have to give props to Olsen for bringing one of her most serious performances to the screen and brilliantly acting out a sequence involving pepper spray and guns. Uhm, hello Oscars, give her the pepper spray Oscar, please!

As for Jeremy Renner’s Cory Lambert, he’s basically a cowboy who’s really good at shooting animals and people. He’s a walking, talking machine that pushes the story along with some melodramatic backstory slung behind his back. He’s a good vessel for sharing another instance of the issue at hand (missing women not being reported on) but is also an absolute tank that cannot be physically harmed and is close to emotionally solid. That makes him kind of interesting, but there’s not a whole lot to work off of when you approach a character and stick him with a badass mold that’s hard to move out of.

Overall, there’s a bigger issue that is not explicitly Sheridan’s fault, but is a larger topic that needs to be discussed. Wind River is yet another film to broach a topic faced by a minority through the lens of a majority. There’s an innate bias putting a white man behind the camera, something I’m sure most critics of this film are aware of, but beyond Sheridan airing his grievances on this subject, it seems like he missed an even bigger mark by perpetuating some bizarre aversion to placing Native American actors in the foreground of their own stories. 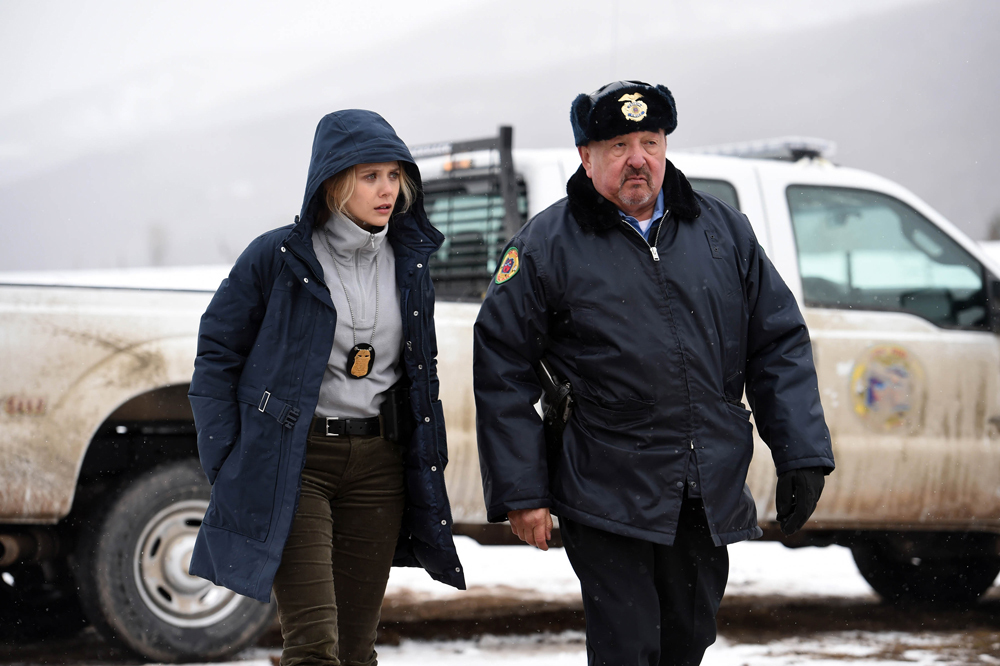 Some who have seen Wind River might argue that there’s the lovable cop character played by the incredible Graham Greene (a Canadian First Nations actor), but, to throw that argument back at them, those same people should probably note that Greene is absent during the scenes which really propel the plot forward and, if anything, feels like a very prominent side character who’s eventually pushed far off to the side. I can absolutely see ways in which Wind River could be resculpted to be more inclusive and put less of an emphasis on satisfying a white savior-type trope, but that’s ultimately not the film we received. We need to reckon with and acknowledge this fact as people who engage with cinema and as folx who can enjoy it. It’s something we need to say (because it’s true), but it does not mean we need to hate the film.

To be fair, however, I absolutely need to give props to the scene-stealing performance of Gil Birmingham (Parks & Recreation, The Unbreakable Kimmy Schmidt) for showing me that he has so much more range than his comedic performances let on. He is only briefly featured in the film as the father of the film’s victim, but the gravitas he brings with him weighs heavy on Wind River in a way that’s unforgettable. I have chills thinking about his final scene.

(Thinking back on these performances reminds me of the fact that there are three Native American women featured in the film, two of whom hide behind closed doors with little to no dialogue. For a film trying to emphasize the visibility of these women, it sure doesn’t do them a lot of justice by robbing their characters of screen time and thoughtful development.)

It’s what I’d call the NPR effect: media which explores and explicates stories that are unseen or ideas that must be shared, but primarily through a politically middle-left/white voice. Something that makes people go Hmm without committing too much thought to the idea.

Wind River is a thinkpiece. Think of it as the start to a larger discussion powder-kegged by Sheridan but left in the hands of the audience viewing its subject. The only question is: What do we do next?