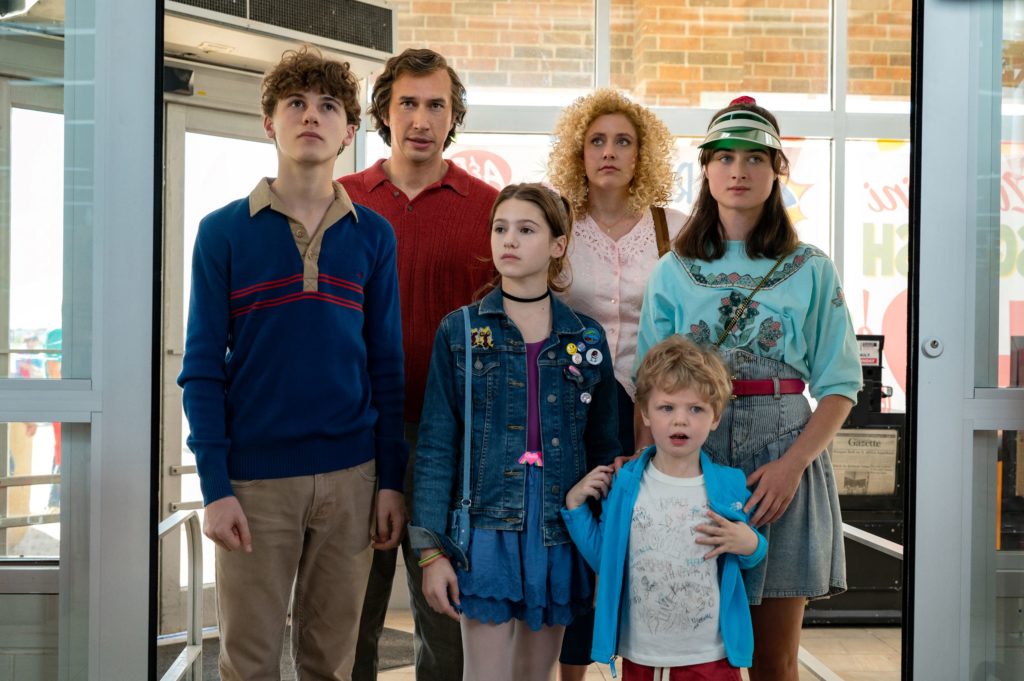 The days of the “Netflix model,” at least in terms of production, may be numbered.

It was never going to last, of course; you don’t need to be a business genius to foretell that making hundred-million-dollar blockbusters and then refusing to sell tickets for people to see them is not a particularly sound business model. If recent financial reports are to be believed, this reality may be catching up with them, and they may soon begin tightening their belts (or, more depressingly, focus exclusively on such algorithmically divined pablum as The Gray Man). But if this truly is the end of Netflix’s age of excess, what a way to go out: an $80 million adaptation of a beloved novel which consists almost entirely of sardonic, hyperliterate monologues about consumer culture. White Noise, by all logic, should not exist, but I am very happy that it does.

Adam Driver, immersed in a fat suit and male-pattern-baldcap, plays Jack Gladney (or, as he’s known professionally, J.A.K. Gladney), esteemed professor of “Hitler Studies” at the fictional College On The Hill (“My name has become synonymous with Hitler,” he dryly boasts). Jack lives a pleasantly sedate Reagan-era life with his wife, Babette (Greta Gerwig, in big sweatshirts and bigger wig), and their four children from various marriages. Jack’s best friend on campus is Murray Suskind (Don Cheadle*), a professor of “Living Icons” specializing in the mythology of Elvis Presley, and the two pass the hours trading wry ruminations on the banal profundities of supermarkets and television. But outside forces threaten Jack’s upper-middle-class comfort. For starters, eldest daughter Denise shares with Jack her discovery that Babette has surreptitiously been popping a mysterious white pill labeled “Dylar,” which is by all accounts unknown to modern pharmacology (Denise knows, because she reads the latest drug index recreationally). Then there is the “Airborne Toxic Event,” a massive, poisonous cloud making its way slowly toward the center of town, to which Jack may have been exposed and which may (or may not) lead to his death sometime in the next 15 to 30 years.

White Noise is based on the cult classic novel by Don DeLillo, whose dense, wordy prose is frequently considered to be cinematically unadaptable (the best-known DeLillo adaptation, 2012’s Cosmopolis, comes from veteran adapter-of-the-unadaptable David Cronenberg). The natural approach would be something in the mannered, hermetic approach of a Wes Anderson, presenting the ’80s through the detached, clinical eye of DeLillo and his characters. But while the performances are certainly mannered (they have to be to take on DeLillo’s dialogue), director Noah Baumbach (who co-wrote several of Anderson’s films) instead draws inspiration from two of the most steadfastly “alive” directors of the twentieth century: the bustling, overlapping dialogue of Robert Altman and the dreamy, magic-hour haze of Steven Spielberg. As a fan of the novel, I was initially taken aback by Baumbach’s incongruously energetic tack, but I quickly came to realize that his approach here is a canny one. Directors who attempt to fussily mimic the tone of particularly writerly writers tend to turn out stuffy, overly precious films like The Goldfinch or Where the Crawdads Sing, which are so mannered that you want to grab them by the collar and shake some life into them. Baumbach, by contrast, drops his bored and overeducated characters into a world that swirls around them, making their ennui and obsessions over minutiae all the more hilarious. Sometimes the greatest angst rears its head when your surroundings are at their most vibrant.

Of course, there is another, more cynically amusing possibility: Netflix is, after all, the platform that gave us Stranger Things, and there is a greater-than-zero chance that the book’s ‘80s setting helped persuade the studio to loosen their purse strings. If you squint, you can almost see a superficial resemblance: the gauzy, sun-dappled cinematography, the me-decade signifiers, the enormous, fantastical threat looming over suburbia (Baumbach even enlists ‘80s/’90s nostalgia object Danny Elfman to compose the jaunty score). But Don DeLillo is no Norman Rockwell, and Baumbach casts a decidedly more jaundiced eye toward the decade than many of his aging Gen-X peers. Nostalgia-minded viewers will likely smile at first to see, for example, the vintage cereal boxes and soda bottles in the Gladneys’ kitchen. But the product placement keeps coming, and keeps coming, until the frame is practically choked with corporate mascots and brightly colored logos. As the characters march in lockstep through supermarket aisles and drive through endless traffic, the effect is less warm and fuzzy remember-whenism and more like Koyaanisqatsi slowed down to a living pace. I am eagerly awaiting the confused verdicts from casual viewers who stumble across the movie in their “BECAUSE YOU WATCHED STRANGER THINGS” queue. 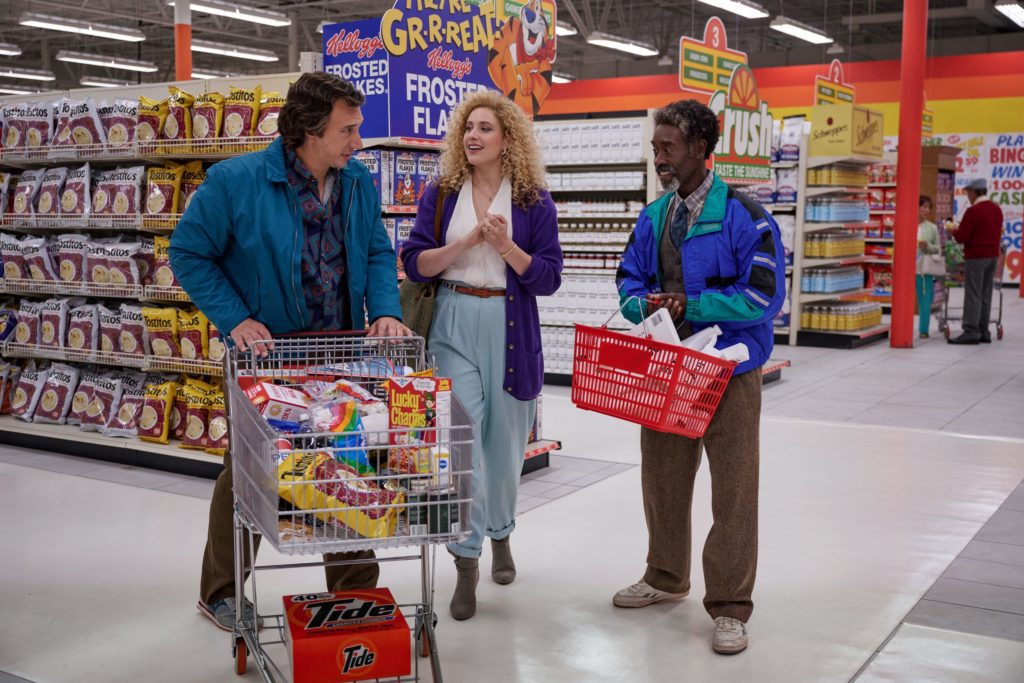 As a record store clerk turned film critic, one of my greatest skills/curses is my ability to hone in on and analyze album covers visible on screen, and White Noise contains a lulu. Sitting on the shelf of the German teacher who Jack surreptitiously visits (it would be a major professional embarrassment, after all, if it became known that the world’s leader in Hitler Studies didn’t speak a word of the language) is a vinyl copy of Tears from a Glass Eye with a Tongue of Madness by Brother Theodore. Born Theodore Gottlieb to a wealthy Jewish family in Dusseldorf in the early 1900s, Brother Theodore escaped from the concentration camps and emigrated to America with a bitter attitude toward humanity. He landed in Greenwich Village, where he fashioned himself as a “stand-up tragedian,” performing bizarre monologues about death, psychosis, and existential malaise in the neighborhood’s hip, underground nightclubs. Theodore came to national prominence himself in the early ‘80s as a frequent guest on David Letterman; his appearances are all on Youtube, if you’re looking for a new rabbit hole to venture down.

I don’t know if Don DeLillo is a fan of Brother Theodore, but his dark, cockeyed worldview can clearly be seen in Baumbach’s approach to the material, and particularly in Driver’s performance. Jack’s preferred attire of academic robes and tinted glasses, combined with Driver’s naturally glowering, birdlike features, give the character the appearance of an enormous vulture, and, when you’re looking for them, it’s difficult not to see some of Theodore’s morbid histrionics during Jack’s lectures and soliloquies. In perhaps the best scene of the film, Driver and Cheadle deliver dueling lectures on Elvis and Hitler’s mothers while pacing around the same classroom, and Driver transcends into a feverish, tooth-gnashing reverie. It’s absurd, mesmerizing, and a little disturbing– one can imagine Brother Theodore grinning devilishly.

Perhaps inevitably, White Noise will be a divisive film; its mix of broad exuberance and deadpan pseudo-philosophy will likely be met by many viewers with puzzlement, if not outright hostility. But I was utterly charmed by this strange little movie, which manages to do everything a good adaptation should do and quite a bit more. The cast is uniformly excellent, clearly having a ball sinking their teeth into DeLillo’s deliciously surreal dialogue; particularly good are Sam Nivola, May Nivola, and Raffey Cassidy as the three elder Gladney children, who volley their banter back and forth with remarkable comic precision. Less expectedly, the film is a treat to look at, a visual delight far beyond what one might expect from either a DeLillo adaptation or a Baumbach film (to say nothing of a Netflix original; unusually for the studio, Baumbach was allowed to shoot on 35mm). Like its central supermarket, it offers a startling array of vivid colors and insights into the triviality of everyday life– and, like Murray Suskind, I suspect I will return to it frequently.

* – DeLillo devotees may recall that Murray is described in the source novel as a white, Jewish man; it is the smallest of comforts that the functional illiteracy of contemporary “nerd culture” has spared us a racist backlash against this inspired bit of colorblind casting.