On Thursday, May 19 at the Coolidge, the Balagan Film Series presented eight short films by the late American experimental filmmaker, Will Hindle. I’m hesitant to write anything about them, given the special difficulty of watching Hindle’s films after the screening. As they don’t exist online or in any video format, to see them, you or someone has to rent native 16mm prints from one of two experimental film distributors in New York or San Francisco. So, if reading the words below compels you to see his films, I’m sorry.

For a nice background on Hindle, you can read the program written by Balagan curator, Stefan Grabowski. As he notes, Hindle was a contemporary of experimental filmmakers like Stan Brakhage and Bruce Baille—all three of whom are credited as early proponents of the Personal Film Movement away from industrial films and toward low budget productions conceived of and produced largely by a single individual. And Hindle is certainly the author of these films, reinforced by the imposing titles in capital letters that introduce each one: “WILL HINDLE’S ________”. 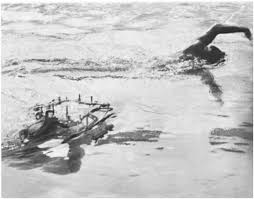 Watersmith (1969) is Hindle’s longest film at 32 minutes. It was made during the height of his productivity and critical praise, on the heels of his surrealistic fantasy film, Chinese Firedrill (1968), of which film theorist Gene Youngblood has said contains “possibly one of the great scenes in the history of film.” Fantastically surreal it is–Watersmith unearths a hidden “world within a world” of ethereal particles, lines, and shapes moving across the screen in ways unaccustomed to our limited eyes. More concretely, the film is a document of an Olympic swim team practice. It begins inauspiciously with a shot of two swimmers changing in a murky locker room before heading out to the pool, and the practice begins…

Beyond this early point in the film, divisions of time marked by events come rarely. The swimmers repetitively swim lengths of the pool to hypnotic effect. Their bodies are captured by Hindle’s camera from many uncommon angles—diagonally from a very close distance; tracked underwater from in front; peered at the tops of their heads while hovering over the pool. He establishes their presence as physical bodies by exhausting their range of motion in the pool, and then transfigures their form: Gradually, what were once biological limbs are replaced by energy and light. The pool’s water is no longer just the natural matter that gave the team their resistance to swim through; it’s a medium on which Hindle can playfully experiment with color tinting, multiple exposures, travelling mattes, and dreamlike lap dissolves. 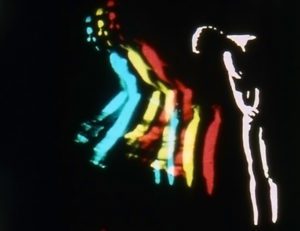 There’s a short sequence maybe two thirds of the way through when one of the swimmers is photographed from underwater as he swims toward the camera. In his wake, a dark green constellation of parts water, light, and aura travels with him as he claws through a dark, nebulous background. Another (a still of which is pictured above) shows the white silhouette of a swimmer at rest, preparing to dive into the pool. As he bends his knees and gracefully propels himself out- and downward, we see a trailing motion of his process as still, monochromatic figures of different hues, which seem to appear on screen in time with the opening and closing of the camera shutter gate.

Watersmith is riddled with moments like these, which seem to escape normal dimensions of perception and cause you (me) to gaze in astonishment at what you’re being made to see on screen. Academy of Motion Pictures archivist, Mark Toscano, who recently restored a number of original Hindle films, aptly described the effect of Hindle’s craftsmanship on the viewer in this blog post: “The interaction of layers, the procession of sequences in tandem and in succession…often have the effect of hitting the viewer on both a gut and intellectual level without you knowing precisely why.” Extended more broadly, Watersmith is a testament to the power of the analog filmstrip to elicit visceral enjoyment—not from narrative or theme—but from a confluence of cinematic techniques evoked through the physical grain of film. It’s sad to me that Watersmith and Hindle’s other works can’t even be previewed as video excerpts online, but I can imagine that his films on film, maybe more than most, would lose their emotional resonance when transferred to video. Hopefully these new 16mm restorations will prompt more microcinemas and experimental screening series like Balagan to show his stuff. That would be good. 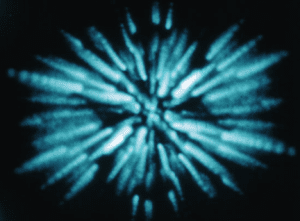 Liked it? Take a second to support Isaac Fuhrman on Patreon!