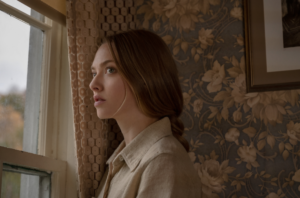 Do you really know the person who sleeps beside you at night?

Netflix’s Things Heard & Seen, above all, poses this question to its female viewers. Based on Elizabeth Brundage’s hit crime fiction novel All Things Cease to Appear, the film unspools the creepy, somber tale of the young Claire couple, and how their new home reveals nefarious secrets in their marriage.

Kathryn (Amanda Seyfried), George (James Norton), and their young daughter Franny (Ana Sophia Heger) move to upstate New York, where George has found a position as a professor at a small, private university nestled in the Hudson Valley. Despite Kathryn’s hesitation, they move into a creaky old house from the 1800s. As time goes on, Claire—a professional art restorer—finds herself frustrated at her husband’s escalating selfishness. While he is at work, she feels isolated in her home as she struggles with bulimia. Their marriage becomes strained when George’s personality is slowly revealed to be controlling and dismissive of both Kathyrn and Franny.

As George’s behavior worsens, Kathryn begins to notice eerie things springing up around the house. It begins with the master bedroom reeking of car exhaust, the electricity shortening out, and the piano playing by itself. Kathyrn finds an old, cryptic Bible on a high shelf. When she notices a shimmering yellow light following her around—on top of all the other startling things—she begins to wonder if their new home is haunted. 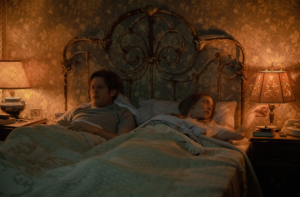 George writes his wife off as crazy, dismissing her fears and further becoming a contemptible husband, father, and coworker. He meets a young woman at the town library (Stranger Things‘ Natalia Dyer) and begins to have an affair with her. After running into an old advisor from Colombia while chaperoning a school trip to the MET, George is ousted as a liar who forged a letter of recommendation so he could become a professor. As his behavior becomes more volatile and reckless, deadly sins from his past begin to bleed into his present.

As Kathryn gains the love and support of her newfound community, George gains their distrust and dislike as truths come to light about him. The history of their tragic, historic home begins to parallel its current inhabitants.

The film’s strength lies in the chemistry between its actors—Seyfried and Norton play off one another like they’re a real married couple trapped in a doomed marriage. Norton really shines here, playing a charming, manipulative sociopath to Seyfried’s doe-eyed, headstrong wife. The film’s stunning, foliage-covered backdrop of the Hudson Valley creates a haunting atmosphere that—despite being so wide open—becomes increasingly suffocating. I also adored the little echoes of Nicolas Roeg’s Don’t Look Now that are sprinkled throughout the film.

However, unexpectedly, the film delves into the deeper meaning of the afterlife and theology—and it becomes its focal point, even though it was marketed as a horror/thriller. Things Heard & Seen evolves something completely different by the film’s final act. I was thrown off by it at first, but upon further reflection, I found it surprisingly refreshing and it added to the peculiarity of the plot.

Things Heard & Seen is an eerie, deeply unsettling film that captures its audience with a staggering story of betrayal and abuse tinged with horror.