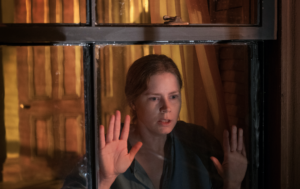 Based on the bestselling novel by A.J. Finn, The Woman in the Window follows child psychologist Anna (Amy Adams), an agoraphobic who spends her days binge-drinking and watching her neighbors from her Manhattan brownstone. Her contact is limited to her stoic therapist and calls from her daughter, Olivia (Mariah Bozeman), and husband, Edward (Anthony Mackie).

Anna watches as the Russells, a new family from Boston, move in across the street. Soon after, Anna is visited by Jane Russell (Julianne Moore), the mother of the family. She and Anna bond over wine and a card game. Anna also meets the family’s young son Ethan (Fred Hechinger), who implies that Alistair (Gary Oldman), his father, is a danger to their family. Following the foreboding conversation with Ethan, Anna watches helplessly from her apartment window as Jane is stabbed to death across the street.

After Anna contacts the police, things begin to unravel—Alistair comes over with another woman who claims to be Jane. This revelation makes Anna question her sanity and her suspicions rise at the potential that Alistair is covering up Jane’s death.

The Woman in the Window, from its initial pitch, seems like an entertaining film—and it is, to some degree.

The first half pulls you in, but the second half does nothing to keep you there.

Anna’s suspicions about Alistair, and what really happened, become a jumbled mess. As the film gets into the thick of it—when there should have been a seamless transition to reality and what actually happened to Julianne Moore’s “Jane”—the writing gets too caught up in itself, and there are far too many surprises and twists within one section of the film, some of which are not believable. Better pacing and better editing would have saved this script and allowed for a better understanding of characters’ motivations, actions, and interactions.

While the cast shines in their roles, from Adams to Oldman, they couldn’t save the confusing zig-zag of events that the script pulls their characters through. I would’ve loved to see this one more fleshed out and edited for a more concise film.