Friends, Romans, countrymen, lend me your ears: I come not to bury the Human Centipede, but to praise it. In the annals (har) of horror, few franchises have taken as much shit (hardy har) as Tom Six’s series of graphic, weirdly single-minded body horror epics. “Gimmicky,” their detractors call them. “Revolting.” “Trying too hard to shock an increasingly jaded fanbase.” I can’t really argue with any of these points. But I also won’t pretend to not love these movies.

I’m here to review Six’s latest entry, entitled, much to detractors’ relief, The Human Centipede III (Final Sequence). But in order to fully unpack it, I feel I should spend some time discussing how the Human Centipede series works. Unlike most franchises, in which each film serves as a continuation of a single story, the Human Centipede films each take place in a new, self-contained universe, in which the previous entries exist as feature films. While some actors appear in multiple installments, no characters exist from one film to the next. The stories, like their subjects, are connected solely by one, disgusting thread. 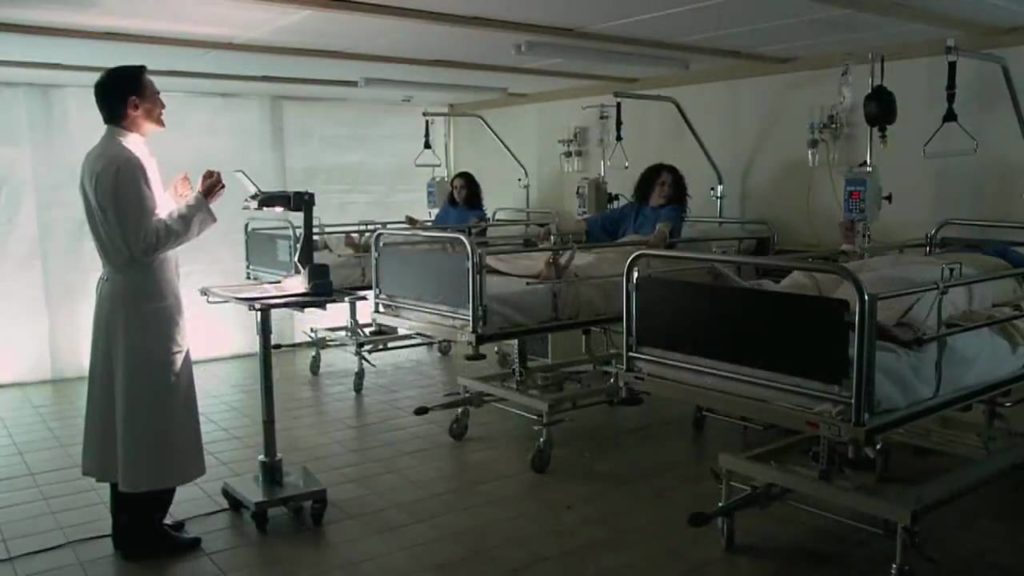 The first film in the series, aptly entitled The Human Centipede (First Sequence), is, to borrow the tagline from the Spanish slasher film Pieces, Exactly What You Think It Is. A German mad scientist (played with reptilian gusto by the wonderfully named Dieter Laser) abducts three foreign backpackers for the purpose of creating a human centipede. Enough ink has been spilled over the years that I don’t feel the need to explain what that means, but for the uninitiated and/or unimaginative, it is handily summarized in the film’s signature image: 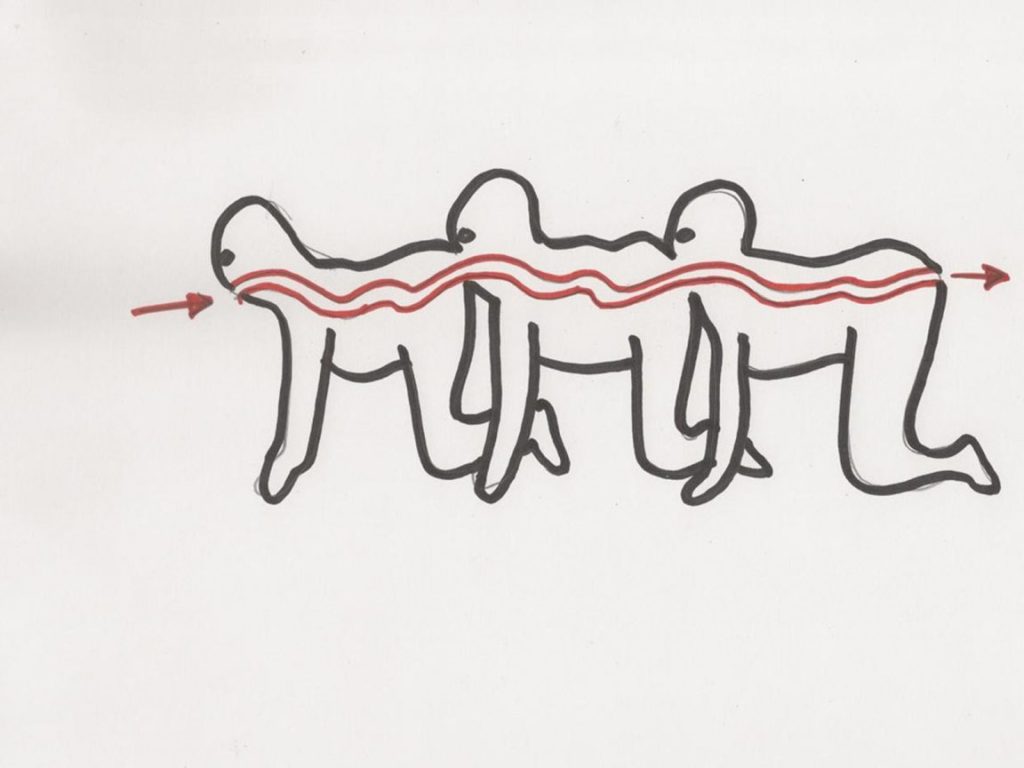 Got that? Good. First Sequence has been criticized for being a one-trick pony, but that’s what I find makes it, for lack of a better word, endearing. There is very little suspense; the ‘Pede is realized by the end of the first act, with the rest of the film devoted to exploring the pros and cons of owning or being part of a human centipede. There is a purity to this film, as if Six came up with the idea of a human centipede, and decided to make a movie about it instead. It also effectively killed the “torture porn” genre of horror prevalent in the mid to late 2000s, because really, where can you go from there? 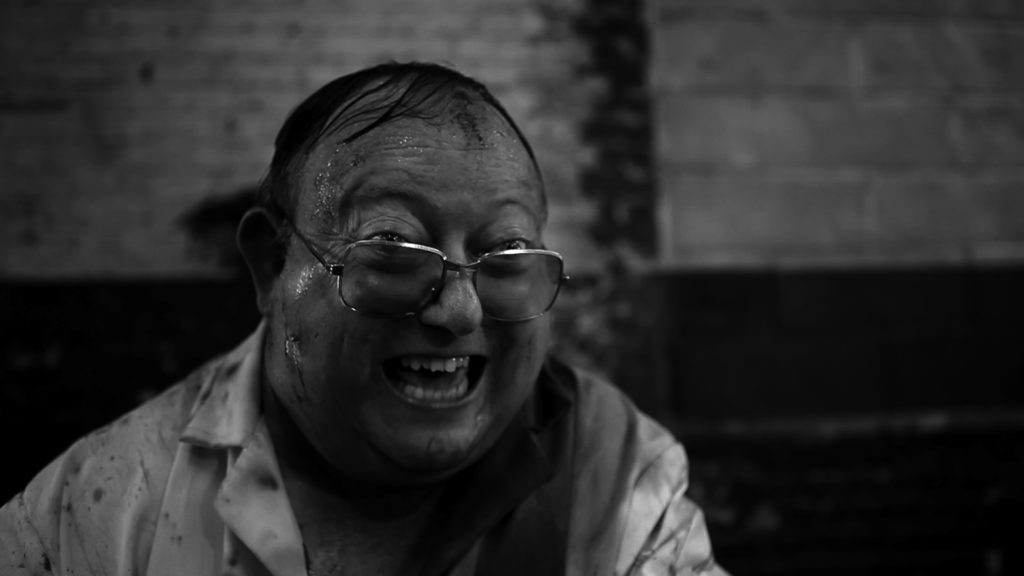 The follow-up, 2011’s The Human Centipede II (Full Sequence), takes things in different direction. Beginning with the end credits crawl of First Sequence, Full Sequence tells the story of Martin (an unnerving, almost mute turn by newcomer Laurence R. Harvey), a seemingly autistic parking attendant who has become obsessed with the first film, and, inevitably, decides to make a human centipede of his own (with twelve people, no less). Outside of the obvious, Full Sequence is a radically different film from its predecessor, trading the clinical formalism of First Sequence for grimy black and white. If anything, it makes the first film seem like the set-up to a punchline: while the posters declared it “100% Medically Accurate,” Martin realizes that that doesn’t make it remotely feasible, especially for a man with no medical experience working out of his garage. The first film works as a showcase for its concept; the second works better as a film.

Now then. I have presented the above analysis in hopes that you will understand fully my meaning and frame of reference when I say this: The Human Centipede III (Final Sequence) is not a very good Human Centipede film.

Once again, the series has taken a radical tonal shift, only this time, Six has taken the black comedy undertones inherent in the series and made a full meal. The story, such as it is, concerns a maximum security prison run by the tightfisted Bill Boss (Laser, clearly having a blast) and his nebbishy accountant Dwight Butler (Harvey, less effective when forced to speak), as well as Boss’ secretary/sex slave Daisy (porn star Bree Olson, clearly used to humiliation following her involvement in the Charlie Sheen media circus). Butler has been pushing, with oddly evangelical insistence, his vision of turning the prison’s 500 captives into one massive centipede, but Boss refuses, preferring more traditional torture techniques like castration and waterboarding. But when the governor (Academy Award nominee Eric Roberts, only marginally more engaged here than in A Talking Cat?!?) threatens to shut down the prison, Boss comes around to embracing his destiny.

Okay, look: the problem here is not that all of this is grossly offensive. I mean, it is, by any rational metric, but when you’ve built a movie franchise around the idea of sewing people together mouth-to-anus, you pretty much knew the job was dangerous when you took it. The problem is that, for the first time in the series, Six isn’t showing us anything we haven’t seen before. Sure, there’s sticky gore effects, and hysterically profane rants, and people snacking on deep-fried genitals (male and female, in entirely different contexts), but nothing feels especially fresh or thought-out. The intent is clearly a Troma-style bad taste epic, but Six lacks the lunatic enthusiasm of a Lloyd Kaufman. The result feels like such post-self-awareness projects as Tommy Wiseau’s Neighbors or Uwe Boll’s Postal, but I have a hard time believing that Six wasn’t in on the joke from day one. So I don’t know what’s going on.

I do feel like I should go back to Laser, who tears into his role like a rabid pit bull. I’m not going to say he’s good, per se—he pretty much stays at one, blaring tone for the entire movie, and his accent never even approaches coherence—but the man commits to his stupid fucking role, with a performance pitched somewhere between Klaus Kinski and Ed Wood-era Bela Lugosi. While Laser’s constant screaming eventually becomes headachey, he provides an energy sorely lacking in the rest of the film, which limps through a series of tired prison rape jokes and casual racial stereotypes. Tellingly, the film only really snaps to life around halfway through, during a brainstorming session between Boss, Butler, Tom Six (as himself), and the prison doctor (Clayton Rohner, in an entertainingly understated turn) on how to modify the Centipede procedure into a viable penal system.

Which brings us to the most unexpected shortcoming: for a film which boasts a 500-person human centipede, Final Sequence is surprisingly light on human centipedes. This is perhaps understandable from a logistical standpoint—it can’t be easy to keep that many extras in that position for that long—but, for the first time in the series, Six holds back on what is literally the only reason anyone would go to see his movies. Which would be one thing if he was at all invested in the other goings on, but the film only really connects once Boss and his team have to decide how to release prisoners whose terms have been served, or what to do with a prisoner with a colostomy bag. Everything else just feels like filler.

In the end, the Human Centipede series is, at its heart, a love story: the love between Tom Six and the idea of sewing people together ass-to-mouth so that they share one digestive tract. Separated from his muse for so much of the running time, Six feels a bit at sea. The first two films succeed by being the craziest guy in the room; love them or hate them, both films have a level of danger uncommon in modern horror. Final Sequence, on the other hand, feels nearly indistinguishable from any number of low-budget shock comedies, very nearly forsaking horror entirely. Time will tell if this indeed proves to be the series’ finale (most critics, less charitable than myself, would certainly hope so, though Six has been teasing an installment involving aliens). As it stands, however, Final Sequence ultimately feels like the third member of the original Centipede: weak, malnourished, and full of unnecessary shit.