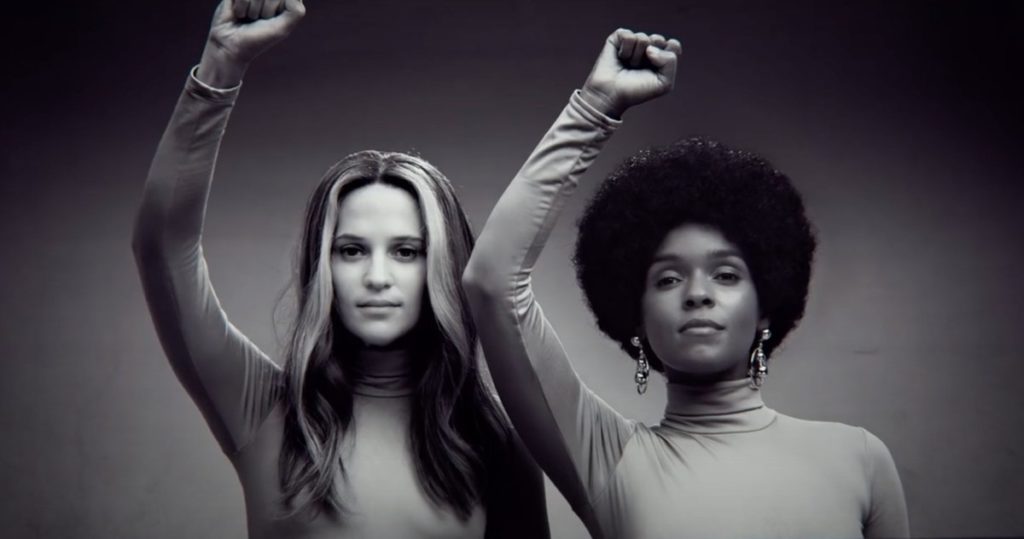 Normally, I would tell you not to bother with a biopic. I’d tell you to find a documentary first, or read the (auto)biography, before going to the dramatization of a person’s life. Most seem to lack something, and even when the acting is good, the dialogue feels corny and obvious. Although there are traces of that in Julie Taymor’s biopic The Glorias, as a whole the film is a departure from the tidy narratives we usually see. Taymor presents the life of activist Gloria Steinem with as much vivacity and movement as the woman herself possesses.

The film follows the arc of Steinem’s life, but the scenes don’t always progress chronologically. Instead, scenes appear linked through feeling, through the meanings behind the moments we’re shown. It looks like remembering feels, and this heightens the feeling that we’re inhabiting Steinem’s mind as she reflects on her life. Gloria is on the move in some fashion throughout the entire film, whether she’s dancing or traveling or marching. She doesn’t go for the sake of going. Gloria goes to visit with people, to hear stories, and to inspire others to move with her.

If at times it feels like we’re just skimming the surface of Steinem’s life, it’s because we forget that even great lives are made up of mostly small moments. An icon isn’t just a series of groundbreaking, history-making days. Taymor shows the slow, careful course of personal evolution, which comes mostly through earnest conversations, offhand remarks, thoughtless insults, passing comments, quiet observations.

Taymor interpolates the main, dramatic scenes with jaunts into the imaginary: the four Glorias that we see throughout the film (Young Gloria, Teen Gloria, Adult Gloria, and the Gloria we know) come together on a fantastic bus ride. They talk to one another, ask questions, comfort each other. They talk about the pivotal moments, and it feels even more like we’re riding along the journey of her life. In this way, we see how all of the little moments coalesced into the Gloria Steinem we recognize. We see a full, actualized person, who thought her life would be one thing, who changed her mind.

The Glorias are these four women, but they’re also the women that weren’t Gloria Steinem—she didn’t become the “celestial bartender” by listening to herself talk. The Glorias are her mother, Ruth, who sacrificed her career to raise a family who was driven to madness by the constraints of womanhood; Dorothy Pitman Hughes, who gave Gloria her public voice; Flo Kennedy, who taught her how to be unabashedly female; Barbara Jordan, who inspired her to stand up for herself; Dolores Huerta, who showed that the women’s movement was about more than just women; Bella Abzug, who fought for a seat in the House of Representatives; Wilma Mankiller, who was the first woman to serve as Chief of the Cherokee Nation; and the innumerable other women across the world whose stories she heard. The Glorias are the women in a remote Indian village who suffered brutal violence, and the women who were discriminated against at Harvard Law, and the women who died from abortions in America, and all the women who don’t have control over their bodies.

The Glorias are stories. They’re Gloria Steinem’s own stories, her encounters with injustice, her moments of empowerment, but they’re also the stories of all the women she met and knew. As Steinem would’ve, Taymor makes sure there’s time to hear from these other women, all the other imbricated movements: racial equality, gender equality, LGBTQ+ rights, workers’ rights, environmental protection, immigration reform, health care reform, and on, and on—the list doesn’t end because the rights of women are inextricable from every lived aspect of womanhood. In The Glorias we see the depth of the female experience, one that is necessarily inclusive, one that transcends bodies, borders, and time.

The Glorias are us, too. The metaphorical bus approaches its destination and takes on technicolor as it fills with women wearing pink hats. Gloria Steinem (the real one, not the one played by Ryan Kiera Armstrong, or Lulu Wilson, or Alicia Vikander, or Julianne Moore) sits at the front with an easy smile. They disembark for the Women’s March on Washington

The movie comes to a close with a voiceover as Julianne Moore reads Steinem’s reflection on the last election, as Taymor cuts to footage of Women’s marches across the globe. I haven’t yet come to a place where I feel comfortable hearing Hillary Clinton referenced in a movie. Is it too soon? It sometimes feels too soon, and usually it’s done with such pathos that it feels like a political ploy, especially considering the upcoming election.

This time, though, it feels different. Gloria Steinem offers closure, and with closure comes the ability to move forward. The way forward is together. In Steinem’s words: “God may be in the details, but the Goddess is in connections.” Taymor did a lot well with this film, but what she did best was capture that ineffable connection, that joy, that elemental thing women share.

And maybe that thing is political: the power of our bodies brought together. Steinem’s life is a demonstration of that power, and she appears as the exact kind of person we need (and need to be): she is humble, but not meek; she speaks in order to elevate others’ voices; and she shows up. Gloria and the women who made her are a testament to what is possible if our bodies refuse to be controlled.

What Julie Taymor shows us in her departure from the expected, what Gloria Steinem shows us with her life and tells us through her story, is that women can reclaim power over bodies. Women don’t have to be told what to do.

Available September 30 on digital and streaming exclusively on Prime Video