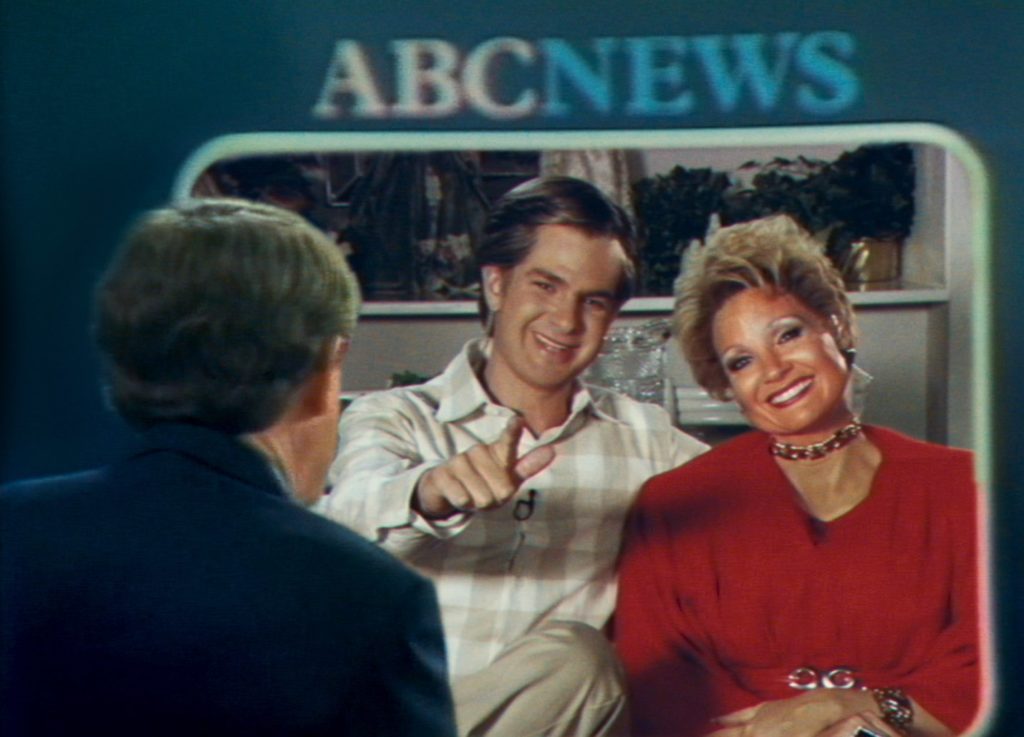 Maybe it was Reagan, or maybe it was MTV, or maybe it was just America’s media obsession reaching terminal velocity, but the 1980s were a decade of personalities. More than perhaps any decade before or since, a surprisingly broad swath of American entertainment was built on the selling of characters too large to be confined to any one particular text: Elvira, Ernest, Pee-wee Herman, Freddy Krueger, Spuds McKenzie. Indeed, so thoroughly was the cultural economy built on the cult of personality that even ostensibly real people effectively converted themselves into fictionalized characters, from pop stars like Madonna and Prince to comics like Roseanne and Bobcat Goldthwait (to say nothing of the pro-wrestling boom, which built an empire on converting flesh-and-blood meatheads into walking, talking cartoon characters). In the era of yuppie conformity and creeping tech assimilation, vivid characters were suddenly a hot commodity.

I find it is through this lens that one can best understand Tammy Faye Bakker, the iconic televangelist and subject of the new biopic The Eyes of Tammy Faye. Even before the string of scandals which brought down the mega-ministry she founded with her husband Jim, Tammy was a crossover figure of sorts, her distinctive chirp and flamboyant hair and makeup turning her into an instantly recognizable pop cultural punchline across the political spectrum. But there was something compelling about her bizarre spectacle, an incongruous humanity which somehow set her apart from her fellow footsoldiers in the Religious Right. This, combined with her inherent imitability, makes her the ideal vehicle for perhaps the most truly odd biopic of the season.

Eyes tells the story of Tammy Faye from the beginning when, as a young girl with a talent for glossolalia, she defies her stern parents (Cherry Jones and Fredric Lehne) to become the star of her local congregation. As a young woman (now played by an unrecognizable Jessica Chastain), Tammy attends bible college, where she meets her future husband, the charismatic aspiring preacher Jim Bakker (played with glee by Andrew Garfield). Dropping out of college to get hitched, the two take their gospel to the road and eventually television, under the tutelage of proto-televangelist Pat Robertson (Gabriel Olds) and the mephistophelean mega-preacher Jerry Falwell (played as a swaggering mob boss by Vincent D’Onofrio). The pair prove themselves an instant hit, thanks to Jim’s telegenic charm and Tammy’s unpredictable energy and penchant for puppetry.*

The Bakkers soon split from Robertson to found The PTL Club, a wildly successful program bringing Billy Graham-style evangelism into the greed-is-good ‘80s. But as the couple ascend to Lifestyles of the Rich and Famous opulence, Tammy finds herself adrift, fading into a cloud of Diet Coke and Ativan in the face of an increasingly distant husband and isolated existence. Then there’s the matter of their donation-based business model– Jim preaches the “Gospel of Abundance,” which suggests that any money offered to the Bakkers will be paid back to the donor by God himself– which is ethically queasy at best, and at worst plainly criminal, and the ever present rumblings about Jim’s sexual proclivities. It isn’t long before the pair fall from grace– but where does a human cartoon turn when the show’s over? 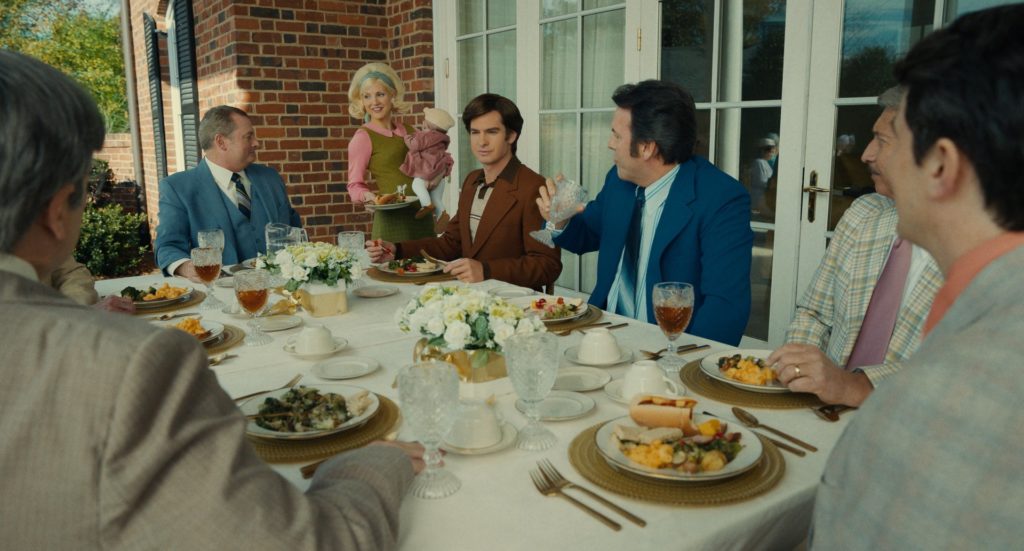 There are those in the critical world who have grown weary of the juicy, high-camp, Ryan Murphy strain of true-crime dramedy. Personally, I can’t get enough of this stuff. There’s a certain salacious pleasure in seeing these tabloid melodramas played out in full Hollywood bombast, with A-listers donning elaborate prosthetics and devouring scenery by the mouthful. The saga of the Bakkers naturally lends itself to the genre, with its larger-than-life personalities, tawdry sex scandals, and too-outrageous-for-satire spectacle. But it also brings a strange level of pathos to its deeply strange protagonist. Unlike most biopic subjects, Tammy Faye was neither particularly talented nor exactly morally righteous, but it is nevertheless fascinating to watch this lost soul navigate this world of extreme wealth and godliness.

The big story here, of course, is Jessica Chastain. One could cynically read her performance here as an Oscar grab, but the fact is that this role allows Chastain to flex muscles rarely asked of her. Unlike the standard Chastain vehicle, which sees her angrily storming down hallways and pushing people out of her way so she can FIX this, The Eyes of Tammy Faye allows Chastain to have fun. One can imagine Chastain rolling each line around in her head until she reaches just the right cadence, filtering the words through Bakker’s goofy, cartoonish squeak until they transform into something else entirely. There is a strong possibility that this year’s Best Actress race will boil down to Chastain and Kristen Stewart, and while I have not yet seen Spencer, it seems safe to say that the two will represent a study in biopic contrasts.

Just as entertaining is Garfield, tasked with an equally silly but far trickier role. Jim Bakker is a charismatic leader, a genuine creep, and a laughable ninny, three facets which are difficult to play simultaneously. By this point Garfield has fully shed his Peter Parker edifice and embraced his inner skeezy character actor (see Under the Silver Lake), and he tears into the material with gusto. His performance is perhaps even more of a caricature than Chastain’s, but it’s no less infectious. The balancing act is on full display when the film reaches its inevitable biopic shouting-match beats, in which Garfield needs to play both the despicable villain and the hilariously ineffectual dweeb within the same sentence. The result is a little like Ned Flanders as Stanley Kowalski.

The Eyes of Tammy Faye borrows its title and general framework from Fenton Bailey and Randy Barbato’s beloved 2000 feature-length documentary, which casts a wry and decidedly queer eye toward its subject (it’s even narrated by RuPaul!). It’s not surprising that Tammy became a camp icon; with her industrial consumption of hairspray and mascara, she has served as an inspiration for generations of drag queens. What is surprising is that the admiration was mutual. Despite being closely linked to the conservative backlash of the ‘80s, Tammy Faye was a surprisingly vocal supporter of LGBTQ+ causes, going so far as to host a live interview with AIDS patient Steve Pieters (played here by Stranger Things’ Randy Haven). This, needless to say, put her at odds with the Evangelical community in general and Falwell in particular, and contributed to her eventual pariah status. It is here that the film finds its heart. Tammy Faye Bakker may not have been particularly talented, and PTL was a hugely sleazy organization, but the film argues that, underneath it all, she was a kind soul not fully aware of the implications of what she was doing. I don’t know how true that is, but in the context of the film, it’s strangely touching.

The Eyes of Tammy Faye isn’t a “great” movie, in the capital-G sense of the word; for all its outre spectacle, it occasionally falls a little too comfortably into the familiar biopic format. Had director Michael Showalter pushed the film even more fully into the absurd– closer to the overt kitsch of the documentary, or to Showalter’s own sketch comedy roots— it could have risen to instant midnight movie status. It also arguably pulls some punches in its treatment of Jim; while the allegations of Jessica Hahn obviously constitute a dramatic turning point, the film stops just short of using the R-word. Still, a little moral squickiness comes with the genre, and I’m not above admitting that the lurid pleasures of seeing Chastain-as-Tammy cheerfully demonstrating a penis pump on live Christian TV outweigh the cons. It may be the cinematic equivalent of a trashy beach read, but I had a great time with it.

Jim’s still out there, by the way. Released from prison and divorced from both Tammy Faye and PTL, Jim launched a new show in 2003. In his new incarnation, Jim pivoted away from his ‘80s-era opulence and toward fire-and-brimstone doomsaying, preaching the coming apocalypse and selling Army-surplus ration kits to the backyard bunker set. In 2020, he was once again busted by the feds, this time for hawking dubious COVID remedies and once again shaking down viewers for donations. By all accounts, this Second Coming of Bakker is even crazier than the first. Yet, curiously, Bakker remains a fringe figure even to those who actively seek out freak shows. Bakker may have been the mastermind behind the “Pearlygate” scandal, but the fact is that no one really cares about him without his flamboyant better half. If any souls were saved amidst the debauchery, it was Tammy who did the saving.

* – A brief digression: the children’s albums Tammy Faye Bakker recorded with puppet pals Susie Moppet and Allie Alligator are essential entries in the surprisingly robust genre of Christian ventriloquist records. These albums transcend the seemingly incongruity of audio ventriloquism with their often haunting album covers, making them beloved fetish items for weirdo record collectors everywhere. I’ve long felt that there’s a great documentary to be made about this phenomenon; The Eyes of Tammy Faye has perhaps done me one better and given the genre its own Walk the Line).

Local journalism is more essential than ever. Please support Boston Hassle today by signing up for our Patreon or by a one-time donation via PayPal.