“It’s sort of strictly just, like, basement business.”
“What does that mean?”
“It means I’m working on it.”

I look forward to learning what Manchester by the Sea’s box office receipts amount to for its opening weekend in wide release*. It’s not the kind of data I can confidently extrapolate from the crowds it’s pulling in around here, where show after show is selling out at multiplex after multiplex (or so I was told by the guy who sold me my ticket at the AMC Loews located in Danvers’ Liberty Tree Mall, where my lifelong habit of showing up painfully early for almost everything served me well for once). This, where I sit even now, is the NORTH SHORE, for crying out loud. Everybody who lives anywhere between Cape Ann and Boston wants to see this thing–for the shock of recognition, the frisson of identifying familiar locations, and the joy of critiquing actors’ accents, if for no other reason. And everyone is also at least vaguely aware that it’s “supposed to be really good,” and that Casey Affleck is being discussed as an early Oscar favorite. When you combine the thrill of taking in a high-buzz film of intense local interest with the looming proximity of Christmas, it’s no surprise that the mood of the crowds turning out this weekend throughout the North Shore for Manchester by the Sea has been elevated, excited, even giddy.

But, you know, then the film starts. And this film, let me tell you, it’s a series of velvet-gloved punches to the gut. It doesn’t take long for the air to begin seeping out of the theater, and at my showing a few people got up and left. But only a few. Those of us who stuck around after the thrill of recognition gave way to the stunned realization that this was not going to be a feel-good movie were rewarded with sturdier, sterner pleasures, such as thoughtful, emotionally credible characterization, and the deep satisfactions of a compelling story told simply (excepting a little narrative fanciness, to be discussed later) and with great heart.

The hearts on display here are all broken, breaking, or struggling to recover. In fact, the whole film hinges on, or is kickstarted by, a stopped heart, when Lee Chandler (Affleck) is interrupted while desultorily performing janitorial duties in Quincy by a phone call informing him that his brother, Joe (Kyle Chandler, weirdly enough), has succumbed to congestive heart failure. Lee, who lives in a dingy Boston basement (basement work!) and who looks, somehow, both dead inside and sad all over, drops his snow shovel and drives up north to see the body and tend to the arrangements. Lee’s return to his hometown is a matter of wariness on all sides–the initially withheld, eventually revealed reasons for which provide the film with an air of brooding, combustible mystery. 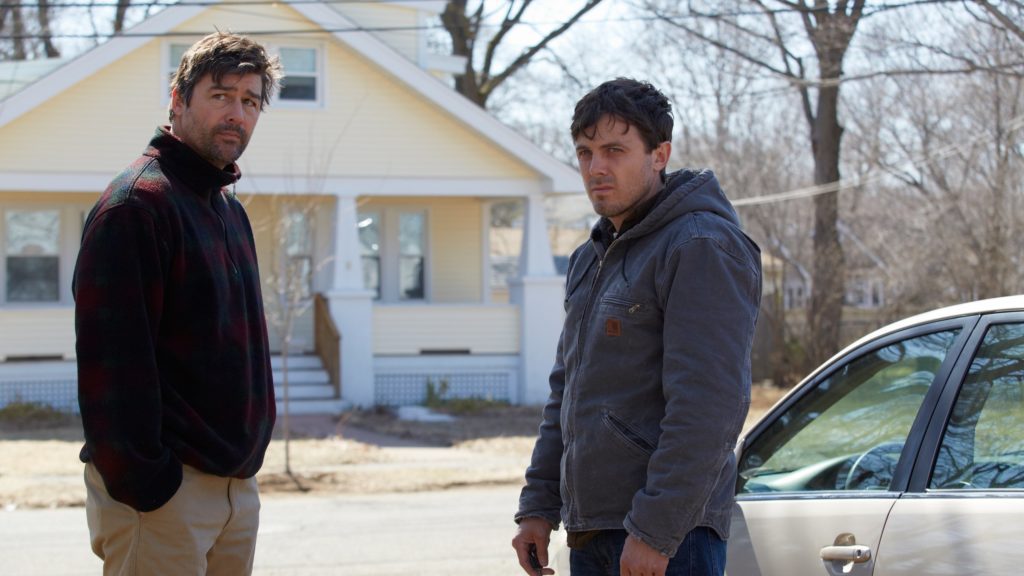 For a film so stately and deliberate, Manchester by the Sea sure ain’t stingy with the trauma. This material easily could have been played as opera, soap or otherwise, rife as it is with potentially over-the-top, melodramatic plot-stuff. Albinoni’s Adagio in G Minor should perhaps, as Anthony Lane complained in the New Yorker, be retired from cinema after its decades of tireless service, but the piece’s grey, grim dolor does help ground the key, Lee-defining (and Lee-destroying) scene it scores, which might otherwise have crescendoed in a delirium of grief.

There is an argument here about trauma, and pain, and difficulty, that runs counter to currently popular conventions about recovery. Manchester by the Sea, in spite of its afore-emphasized gloominess, is far from a humorless film. Its wonderfully naturalistic dialogue contains moments of wayward, awkward, or backhanded comedy, eliciting chuckles deep in the throat more often than guffaws, just here and gone, changing nothing except to render it more bearable. But bearing grief isn’t the same, here or elsewhere in director Kenneth Lonergan’s oeuvre, as overcoming it. We are constantly being told, when we’re not telling ourselves, that, as in Nietzsche’s much abused phrase, what doesn’t kill us makes us stronger. Here’s a film that’s honest enough–or hell, if you prefer, that’s bitter enough–to say that it just isn’t so. Pain isn’t ennobling, and it can’t be avoided; it’s embedded in the business of being alive, and we’re better off acknowledging as much. Or maybe we’re not, but so what, there it is, not going anywhere.

Affleck’s performance as Lee is Manchester’s fulcrum. It’s hard to imagine a more committed, sensitive embodiment of a decent, flawed man unable to get out from under the burden of his own guilt, and relegated to living his life mostly in memory–so much so that his past doesn’t feel past to him at all, a psychological fact that Lonergan translates to the screen through frequent flashbacks, each inserted into the film’s “present” without preamble. The confusion this gambit creates for the viewer comes to feel less disconcerting and more constitutive of Lee’s fractured sense of self as the film goes on. For Lonergan, who has rarely shown much interest in experimenting with shot-making, editing, or cinema’s other basic manipulables–generally relying on the occasional plain-jane montage of slow-moving landscape shots to remind us that we’re not watching a play–it’s a welcome and effective innovation.

Besides the late Joe, who set everything in motion by dying, and who recurs throughout the movie in flashbacks and as a corpse for whose sake various actions need to be taken–trips to the morgue, to the funeral parlor, to the estate lawyer, etc.–the two characters who figure most prominently in Lee’s story are his nephew Patrick (Ben O’Brien in flashbacks; Lucas Hedges as a present-day teenager), with whom all those trips are taken and for whom Lee is blindsided to find himself named legal guardian, and his ex-wife Randi (Michelle Williams), whose limited screen time belies her outsize importance. The halting, wrenching exchange between Lee and Randi that results from their random encounter on the streets of Manchester is the emotional climax of the film. It really fucking wrenches. And while doing so it resets the limits of the possible for Lee’s future. That is, it sets them back. 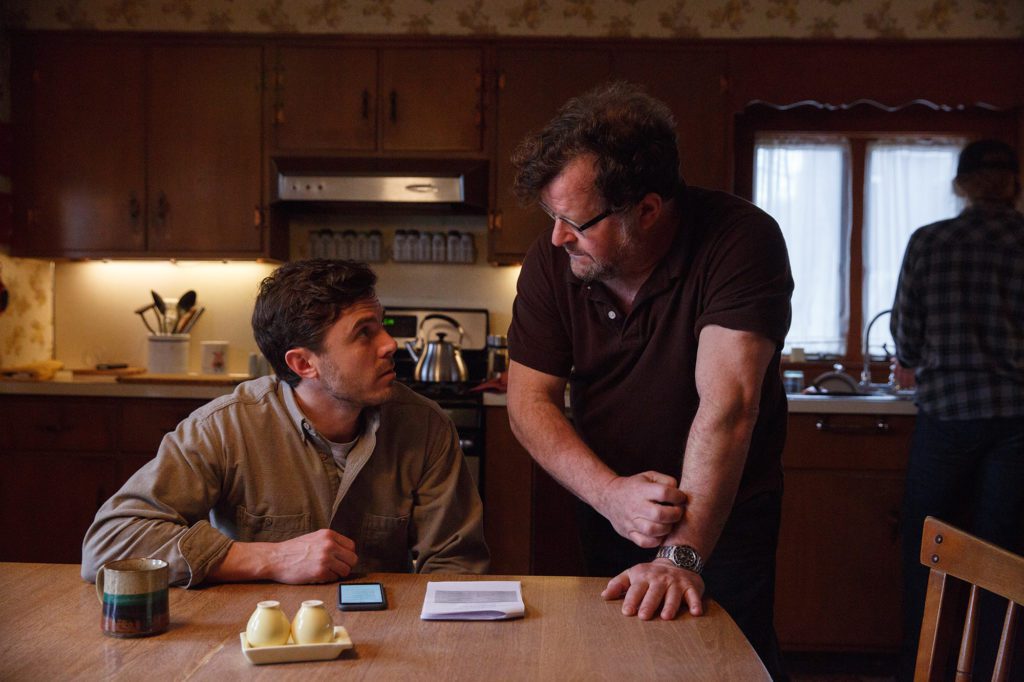 Kenneth Lonergan hasn’t made a lot of films in the sixteen years since he started making them. Manchester by the Sea, a festival phenom since it premiered earlier this year at Sundance, is only his third. His first, 2000’s festival phenom You Can Count on Me, received a fair amount of credit at the time for the impetus it provided American independent cinema; and, perhaps more lastingly, for launching Mark Ruffalo’s career. Lonergan then spent much of the aughts locked in a soul-sucking struggle to realize his ambitions for Margaret, his second picture. It wrapped in 2005, wasn’t released (albeit in truncated form) until 2011, and couldn’t be seen in the director’s intended three-hour cut until the DVD emerged in 2012.

While Lonergan’s primary adversary in that struggle was his studio, Fox Searchlight, he hasn’t failed to acknowledge the role that his own demons–proclivities for delay, self-doubt, self-pity, etc.–played in extending the agony. In its aftermath, despite the widespread critical approbation even the compromised cut of Margaret enjoyed, Lonergan entered a phase of listless, creatively fallow dithering, from which his friends–led by Matt Damon, guy in shining armor–finally coaxed him by appealing to his charitable instincts, first asking him to write a script for Damon to direct, and then insisting he make the film himself. This is that script, and that film.

Manchester doesn’t mark the first time this filmmaker–a playwright, really, with no great flair for cinema as such, no real “style” or auteurist signature–has matched his world-weary nihilism with a moving, humanistic story centered on fully imagined, sympathetic characters. It isn’t even the first time he’s employed many of the tropes, notions, narrative devices, characters, and actors (himself included) that appear here, sometimes with only minor variations. The settings change, if not all that much–Margaret takes place in Manhattan (where Lonergan grew up), but You Can Count On Me’s small town in upstate New York doesn’t look dramatically different than Manchester’s small town in New England (if you overlook the lack of sea, of course). And Ruffalo’s Terry Prescott has a lot in common with Affleck’s Lee Chandler, both of them hangdog and lost (at sea, OK? leave me alone), both suddenly back home and thrust into larger roles in their nephews’ lives than they’d anticipated, and both partial to letting off steam by starting brawls in local dive bars. 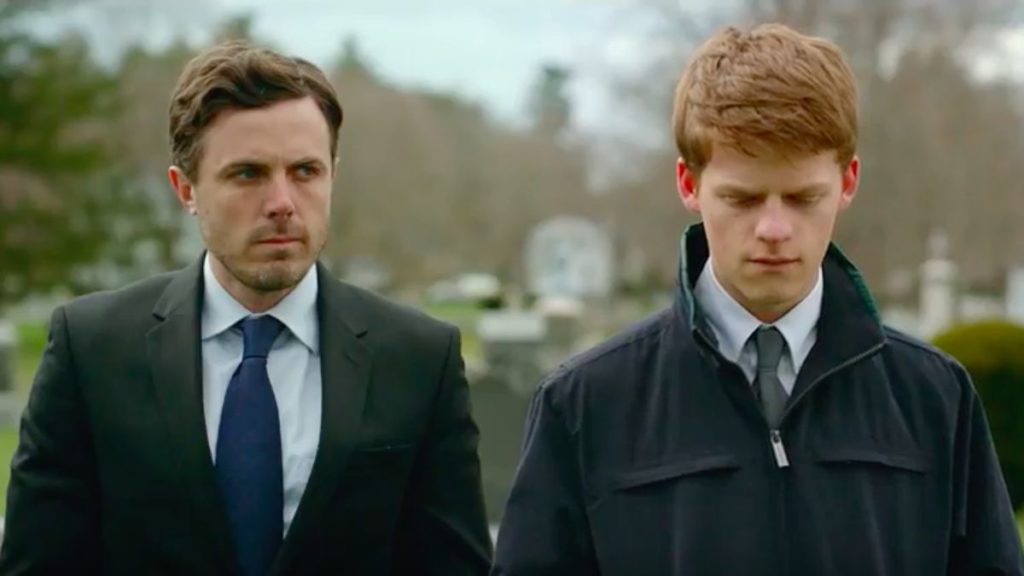 One of the two girls Lee’s sexually ambitious nephew Patrick is trying to sleep with is Sandy, who sings in his band, Stentorian (“We are Stentorian,” Patrick mono-intones at the beginning of every song). The band rehearses in her basement, where they torment their drummer for playing too damn slow, and then for playing too damn fast. It’s a struggle down there, and it turns out to be yet another struggle for Patrick to get where he wants to go with Sandy, what with her mom always hanging around and everything. When Lee asks him about Sandy and his other girlfriend, Sylvie, “Do you actually have sex with these girls?” Patrick replies, “It’s sort of strictly just, like, basement business.” Lee doesn’t know what that means, so Patrick clarifies, “It means I’m working on it.” So many struggles, so many basements.

If, on some level, Lonergan keeps making the same film over and over, well, that’s ok, see, because it’s strictly basement business. He’s working on it, or through it. (This is as good a place as any to mention that Lonergan was raised not by one, but by two psychiatrists, one of them a stepparent.) Manchester by the Sea is the best version he’s come up with yet. Life’s provisional, but you can’t just die.

* – I know it’s a bit crass to consider box office numbers in the context of a review, but with the weekend over we now know what they are, so in case you’re curious: Manchester by the Sea just barely failed to crack the top ten grossing films, landing at #11, but it did so while screening at only 156 theaters nationwide, as compared to the 1,500-4,000 theaters at which each of the films that “beat” it were showing. On a per theater basis, it more than doubled the gross of the weekend’s overall #1, Moana. I’d love to see a regional breakdown of the returns, but I’ll refrain from geeking out any further about it here.