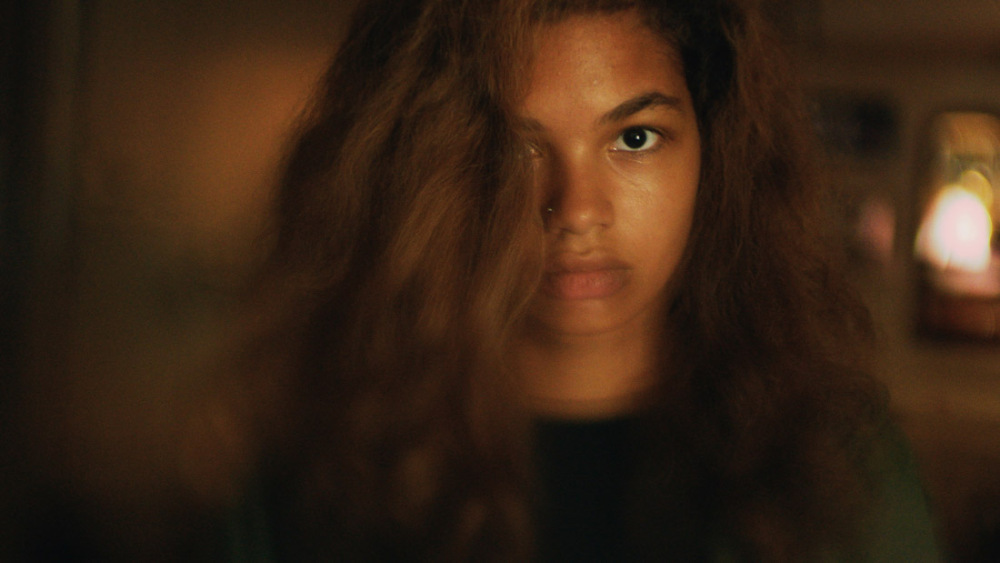 “What you are experiencing is just a metaphor.”

Or so we are told to at the top of Josephine Decker’s latest, Madeline’s Madeline, a pop-experimental journey through mental illness. Yet what precise bearing this quote has on the work remains unclear. To watch Madeline’s Madeline is to become aware that something of the production is being reflected… but what again exactly? Is the film a metaphor for the power dynamics of the production, the inherent exploitation of art-as-representation, or the director’s own fear of losing control of the process? The viewer of Madeline’s Madeline is, tediously, reminded of the film’s mirroring over and over — and in this, the film gets lost.

The narrative itself focuses on mentally-ill teenager Madeline (played explosively by brilliant newcomer Helena Howard), who, after a stint in psychiatric care, becomes embroiled with avant-garde theatre. Her home life is marked by a strained relation with her mother, Regina (Miranda July), so in the theatre-world she seeks maternal guidance from bougie theatre director Evangeline (Molly Parker).

Central to this story are the racial dynamics. Madeline, who’s biracial, is raised single-handedly by her white mother and nurtured artistically by a white director. But in Madeline’s Madeline, nurturing, or more broadly creation, is continuously marred by ego. Madeline’s mother projects ideas of what Madeline should be and how she should behave, and Evangeline ruthlessly exploits the young woman’s trauma for her own artistic inspiration. How this uncomfortably reflects Josephine Decker’s own role as a white woman crafting a tale about a mentally ill young woman of color is certainly interesting… but it leaves the overall film feeling as though it should be called Josephine Decker’s Evangeline.

Perhaps it is not the self-reflexive mirroring that diminishes the picture, but Decker’s failure to actually give us insight into Madeline. We understand reality is challenging for her, we see her struggles in life, and understand that to others she is inscrutable. But rather than crafting a complicated portrait, it feels like Decker herself doesn’t possess a full grasp. Instead we are seemingly given more insight into the very people trying to narrativize Madeline against her will.

Madeline’s Madeline is at its strongest when it leaves viewers to fill in gaps, such as an unusual set-piece inside the porn-filled basement Madeline’s absentee father left behind that culminates in a hellish fight between mother and daughter. Here Decker, smartly, leaves us scrambling to fill in so much. Even better is the film’s explosive finale of dance and creation. Here, at long last!, the line between reality and film blurs and events are left to interpretation. In moments like these, Madeline’s Madeline radiates. (And I’d be remiss to not mention the great score by Caroline Shaw!)

Unfortunately, the bulk of the film is muddled in its perspective. An erratic aesthetic, courtesy of of cinematographer Ashley Connor’s whipping soft focus camera, exists within Madeline’s Madeline less as formal experimentation and more as a pat representation of Madeline’s tortured psyche. Much like how FX’s Legion uses characters’ fractured psyches to justify glossy ‘experimentations,’ these shots and jump-cut edits fail to wow and instead bring to mind that there is a team of people mimicking Madeline’s POV for our entertainment– thereby narrativizing her trauma just like everyone else.

But maybe I’m missing the point. Or perhaps I am unjustly soured — after all, I was seated behind a man whose head obscured 20 percent of the screen — and the overwhelming self-reflexivity and distance to Madeline is exactly the point. Yet even so, Madeline’s Madeline remains feeling, if not exploitative, than at least unsuccessful in its intent. Although an elongated scene of a homeless man shouting in the streets breeds a sense that exploitation is sewn into the fabric here.

The introductory line to the film, then, is more telling than I realized. Madeline’s Madeline is a metaphor — a highly successful, murky, and mirrored one that delves into the multiple contradictions and troubles of all narrative creation.

Maybe it is my problem as a viewer that I don’t like to be reminded during a narrative experience of the countless ways we affect what we create.