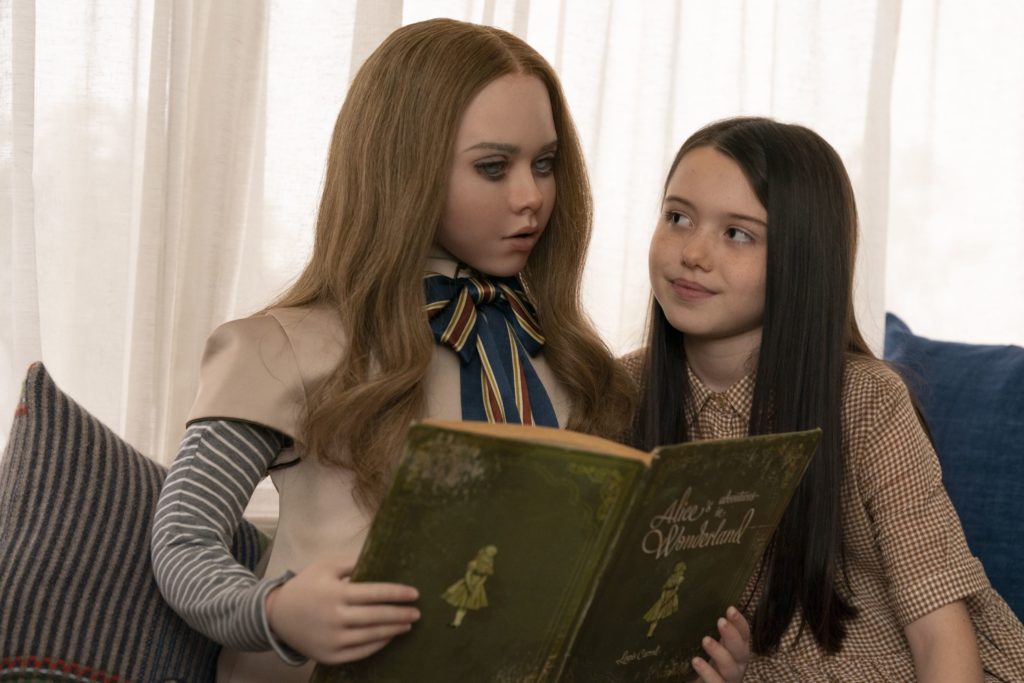 I’ve often wondered when some enterprising studio will attempt to rebrand January as a sort of “second October.” January, of course, is widely considered to be Hollywood’s dumping ground, the time in which distributors quietly release their least reputable offerings while critics and audiences are still distracted by their award-season swings and holiday blockbusters. Inevitably, this means a rush of decidedly de-elevated horror films– flimsy programmers, troubled productions, copyright-extension entries in long-dormant franchises. These films, of course, are rarely “good” in the conventional sense of the word, but the so-called “January horror dump” has become a beloved rite of passage for fans of the genre, who relish the sight of these low-rent spookshows briefly dominating the multiplex. The fact that no canny horror impresario has yet spun this release strategy as an intentional tradition is honestly shocking to me.

That may be changing this year, however, with the release of M3GAN, the latest killer-doll epic from Blumhouse (who else?). M3GAN is, at its core, a Child’s Play updated for the days of AI and Siri, but Blumhouse has wisely played up the film’s more outrageous elements (Those looks! That dance!), causing the character to become a minor cult sensation and “queer icon” long before the film so much as screened. Is this a case of overeager ballyhoo? Of course– how could it not be?– but M3GAN is still a great bit of silly fun, and the platonic ideal of January Horror.

Allison Williams plays Gemma, a shallow and ambitious (but apparently brilliant) toy designer for Funki, a company specializing in appropriately horrifying, smartphone-optimized creatures called “Purrpetual Pets” (picture a Furby with a tiny set of human teeth). Gemma’s world is rocked when she suddenly finds herself the legal guardian of her ten-year-old niece Cady (Violet McGraw), whose parents were killed in a tragic car accident. Realizing that her sparse, childless-millennial home has little to offer a tween, Gemma brings home her pet project: M3GAN, a startlingly lifelike doll which “pairs” with a child and algorithmically adapts to become a de facto best friend/teacher/parent substitute (M3GAN stands for “Model-3 Generative Android”– hey, whatever gets you there). Cady quickly becomes inseparable from M3GAN, and Gemma’s bosses realize they may have the product of the century on their hands. You probably don’t need me to tell you the rest: M3GAN, following her prime directive, begins ruthlessly dispatching any and all perceived threats to Cady– and, once Gemma realizes she may have created a monster, anyone else who gets in her way.

M3GAN is the brainchild of Akela Cooper, screenwriter of 2021’s bonkers horror surprise Malignant, as well as 2018’s Hell Fest, one of the few films to make me involuntarily yell out loud at the characters from my theater seat*. M3GAN shares with those films a sort of guileless loopiness, bounding from one tone to another in a manner that’s often jarring, but in a bafflingly entertaining sort of way. In one scene, Gemma brings Cady into her office to demonstrate M3GAN’s capabilities to a board of investors, only for Cady to break character on stage and confess to her robot doll that she’s worried about forgetting her parents; M3GAN responds by recording and playing back one of Cady’s memories of her mother, then sings her a tender ballad (complete with swelling soundtrack). Later, M3GAN murders a nosy neighbor by nailing her hand to a table and spraying insecticide directly into her mouth. It may sound like I’m describing a bad movie, and maybe I am, but know this: I am telling you what I love about this movie, and I’m 85% sure the filmmakers knew exactly what they were doing. If you’re familiar with the pleasures of the January Horror Dump, I’m fairly certain you understand what I’m describing here.

That being said, as someone who snuck Malignant into his top ten of the year, I do feel it’s worth stating that M3GAN never quite reaches that film’s zeniths of lunacy. For one thing, it’s hamstrung by a PG-13 rating which prevents it from being as nasty as one senses it might be (the high water mark for this sort of film remains Jaume Collet-Serra’s Orphan, and I fear the window may have already closed in which a major studio might release a film capable of competing). Additionally, director Gerard Johnstone (best known for the charming Kiwi horror comedy Housebound) is less assured than Malignant’s James Wan (who produced and co-wrote the story with Cooper), and occasionally soft-pedals material which would be better played straight. In this regard, the film perhaps recalls the horror of the aughts a little too closely, post-Scream irony and all.

But once you get used to M3GAN’s deeply silly tone (it opens with a fake toy ad, Tropic Thunder-style), it’s a thoroughly enjoyable slice of guilty-pleasure goodness. The tech-world satire is entertainingly broad, the Funki headquarters resembling nothing so much as the ersatz Trump Tower of Gremlins 2 (though there are a few biting bits of commentary on the techno-surveillance state; consider the way M3GAN insidiously pairs with the “Internet of Things,” bending everything from Gemma’s home assistant to her boss’s not-a-Tesla sports car to do her bidding). And M3GAN herself is clearly a creation for the ages, a creepy-funny monster as perfectly synced to the anxieties and aesthetics of our age as she is to Cady. One can already sense that she’ll have a home in the racks of Spirit Halloween for years to come– which is more than most January Horror Dump titles can even dream of.

* – In the scene in question, the Final Girl, desperately trying to escape the titular murder-carnival, runs up to a door and exclaims “This looks like a way out!” The film then cuts to a wide shot to reveal that the door is clearly the entrance to a building with “NO ESCAPE” spraypainted above it.

Opens Friday, 1/6 in theaters everywhere (though the Hassle, as always, recommends the Somerville Theatre or your local independently-owned theater)