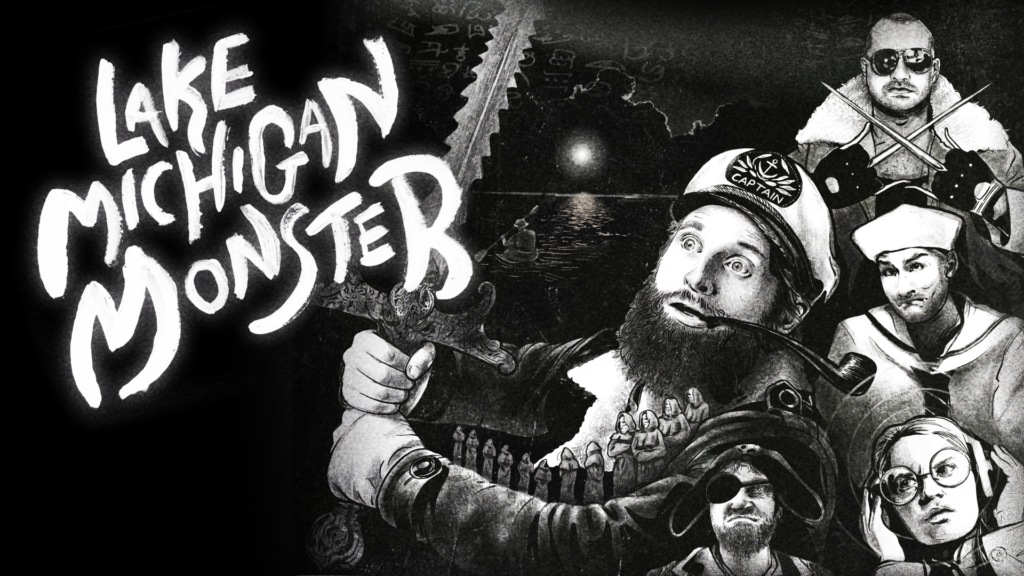 It’s not often a movie as fun and exuberantly creative as Lake Michigan Monster comes along, in which joy for making movies comes through so clearly in every scene. In an unexpected combination of Spongebob Squarepants and H.P. Lovecraft, the movie becomes something akin to a raucous sea shanty of a movie. And although writer, director, and lead actor Ryland Brickson Cole Tews’ unique vision and seemingly improvisational brand of creativity can lead to whiplash storytelling, throwing viewers like myself for a loop, his enthusiasm remains an infectious and wonderful through line for the audience. In every scene, you can sense a bombastic feeling of camaraderie and excitement—and what better way to set the stage for a wild and eccentric movie such as this.

Lake Michigan Monster concerns quirky Captain Seafield and his ragtag team of specialists attempting to find—and kill—the monster of Lake Michigan that killed Seafield’s father. We watch as Seafield forms his team and plans his monster-hunting schemes, bringing in a cast of characters that run from stoic to hilarious to spooky. From the first scene and from Tews’ first appearance, his clear vision and energy is apparent, extending from script to production to performance. Even with touches of Wes Anderson, Tim and Eric, and A Series of Unfortunate Events, the movie never feels derivative, but instead refreshing and new. In fact, the story Tews—and Seafield—tell might not actually be the story we think we’re hearing and the journey we’re embarking on. As the mysteries of Seafield unfold, so do the mysteries of Lake Michigan, its monster, and this little movie unreeling before us.

The movie begins with a sort of exercise in repetition, as we watch Tews and his team attempt to kill the monster with the same plan repeatedly, albeit with slight variations. Each new attempt becomes funnier than the last, until some revelations and a strange dream throw this cycle off course into stranger but just as silly territory. This is where the movie veers into the unexpected, into a bit of near-Lovecraftian chaos, sending both Tews and the audience into deeper and deeper waters. Even as the story confronts the monstrous though, Lake Michigan Monster remains weirdly hilarious and hilariously weird. That’s the most succinct review that I can give: this is a weird movie with weird design and weird characterization—but the culmination is near-enthralling in it’s gorgeous black and white style and campy, B-movie design.

The star of this movie is Ryland Brickson Cole Tews, in every sense of the word. His voice is felt throughout Lake Michigan Monster, and the complete expression of that voice comes through so thoughtfully in every aspect of its production, in every scene. I hate to use the “a” word, but one can’t help in feeling an auteur sense of totality in this movie. Tews—and Lake Michigan Monster—are captivating and downright funny. Just as when I was watching the movie, I can’t wait to see what Tews does next.