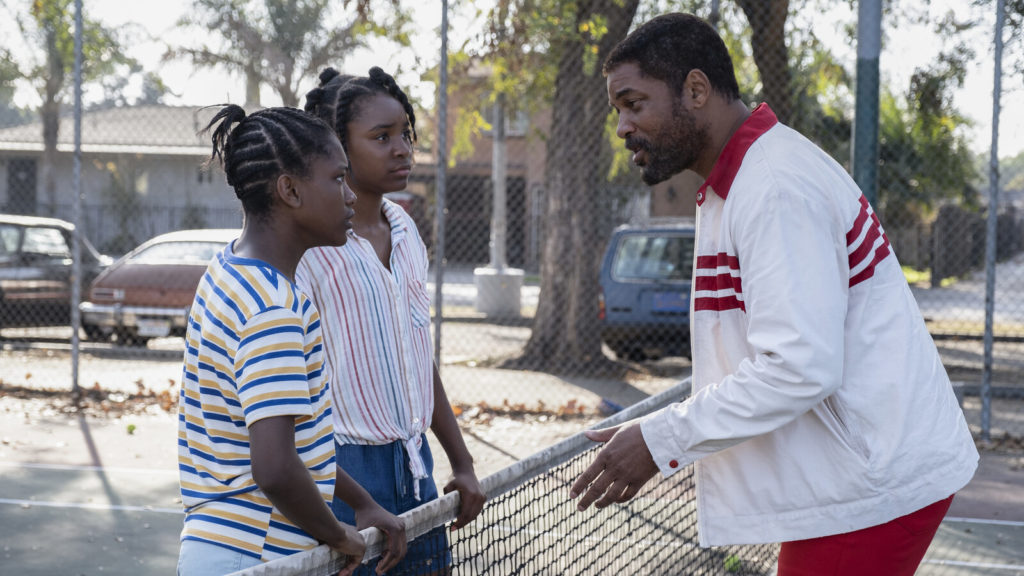 The critically beloved Bohemian Rhapsody (2018) wandered from its most interesting subject, Freddie Mercury (Rami Malek), to re-frame the success of Queen through the surviving members of the band. At times, the movie’s very purpose seemed to be to set the record straight on who wrote what song, whose idea that was. One didn’t need to look at the credits to learn the surviving band members produced the film. The framing of the narrative made that abundantly clear. King Richard suffers from the same disorder: a conflict of interest.

Director Reinaldo Marcus Green and producers Venus and Serena Williams attempted to offset the bias-framing by positioning their father, Richard Williams (Will Smith), as the main character. The Williams sisters have long been known for their humility, a too rare trait for world-class athletes. And odd as it may seem, this humility ultimately holds the film back: the movie really should have been about them.

The importance of humility is front-and-center of the childhood depicted here: Richard at one point even makes the entire family study Cinderella to instill the virtue after the girls bragged vigorously following Venus’ latest tournament victory. The ultimate gesture of humility for a movie produced by two of the greatest athletes in the world that happen to be sisters? Have Will Smith play your father in a movie titled King Richard and recede into the background. Serena (Demi Singleton) is particularly subtracted from her own etiology at the expense of their father.

I imagine the choice was in part because the narrative of the American Dream and can-do attitude, which the filmmakers involved seemingly buy into, works better from Richard’s perspective, since he engineered their success with “his plan.” Every time he makes a major decision for or within the family, it’s prefaced with a dark story about the racism and hardships he endured.

The problem is the lows are only shown in glimpses. The lows are communicated rather than depicted by avoiding a full showing of Richard’s vulnerability during these moments. After a typical street punk sexually harasses one of his older daughters, for example, Richard intervenes and gets his shit rocked. A later encounter with the same punks puts him over the edge, and he pursues them with a pistol. Just before he shoots the primary offender outside a convenience store, in an unbelievable act, a drive-by shooter does the dirty work, killing him before Richard’s eyes.

Though it didn’t quite happen like this in real life, the filmmakers brush over the moment rather hastily, and the gang eventually starts protecting the sisters without any explanation or meeting between Richard and them. And with Will Smith as the lead, they completely missed the Oscar-bait scene of Richard facing the darkness of his soul that almost led to him taking another human’s life. He never even came to terms with the less bleak reality that he almost ruined his plan for his daughters to be world champion athletes.

The film ends with Venus (Saniyya Sidney) losing to Arantxa Sánchez Vicario, the world’s best player at the time. On the surface, ending on a loss rather than a win, a la The Way Back, seems refreshing for one of the most trope-reliant genres that is the sports movie, but it’s cheating since the emotional feel-good beat of the normative ending is still in play. It fits the playbook perfectly for a movie that was nothing but textbook.

King Richard opened in theaters and on HBO Max on 11/19.