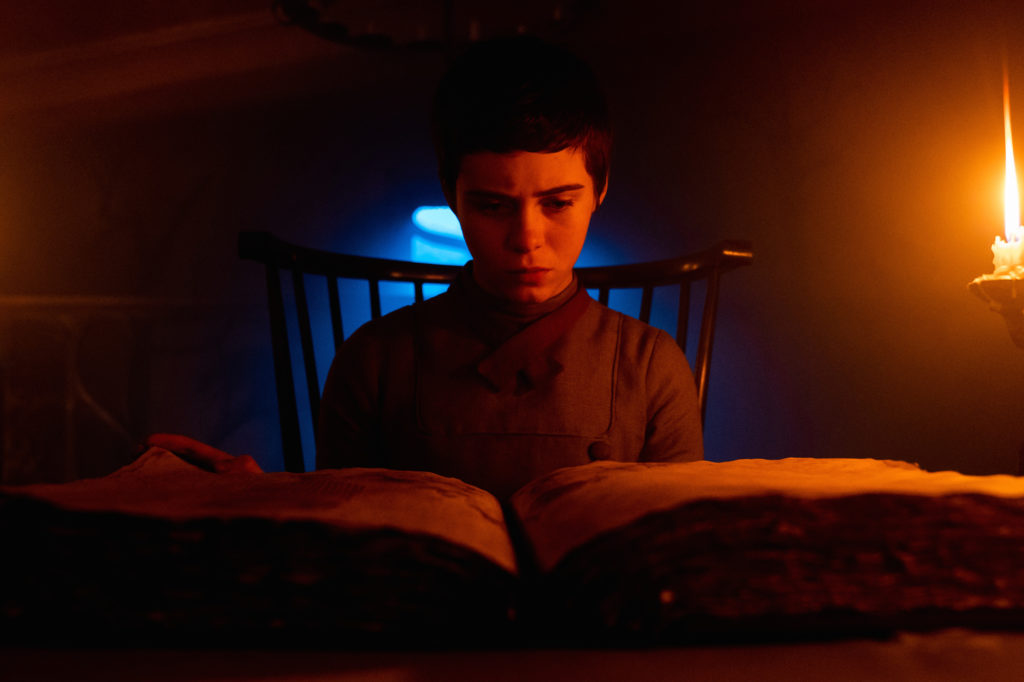 January gets a bad rap.

Admittedly, it’s done its share to earn it. The second the window of award-season eligibility closes, the studios have a tendency to breathe a sigh of relief, put on their comfy pants, and let loose with all the releases they know don’t have a chance in hell for respectability or box office success. It’s a reasonable gambit; the goldfish-memory of the average Oscar voter can be relied upon to forget the year’s first wave of releases, and enough name-brand films from the previous year are still playing that the average moviegoer is still playing catch-up. It is this mindset that gives us the fabled “January Horror Dump,” the post-holiday glut of low budget studio genre films which has come to rival the Halloween season– in quantity, anyway. Even among the horror community, the month’s reputation for mediocrity has become something of a self-fulfilling prophecy: everyone knows January horror films are the pits, so no one goes to see them. Their box office deaths go unmourned and unnoticed.

With that in mind, allow me to use my platform to say this: Gretel & Hansel is not your standard January Horror Dump title. It is a stylish, deeply idiosyncratic work from one of the genre’s most underappreciated auteurs working today, and anyone with an interest in horror should make a point of seeing it in a theater– while they still can.

As hinted by the title, Gretel & Hansel offers a slight twist on the classic Brothers Grimm fairy tale, with an emphasis on the elder sister (Sophia Lillis, the younger Beverly Marsh of the It movies). With their father dead and their mother driven to madness, Gretel and younger brother Hansel (Sammy Leakey) set off into the woods in search of work and a new life. Unsurprisingly, the pair lose their way, and are on the verge of losing hope when they come across a strange house deep in the forest– not made of gingerbread in this telling, but filled with a seemingly never-ending banquet of tarts and ham. The house is kept by a mysterious old woman named Holda (Alice Krige), who invites the children in and offers them free reign of her home. But Gretel finds herself beset with visions of missing children, and begins to suspect that all may not be well in their new home away from home.

Right off the bat, the difference between Gretel & Hansel and its seasonmates is apparent. Following a widescreen prologue (dramatizing a portentous folktale which Gretel tells to placate her brother), the image noticeably contracts into a ratio slightly wider than academy, but boxier than the average theatrical release. This odd shape is used skillfully by cinematographer Galo Olivares (Alfonso Cuarón’s camera assistant on Roma); nearly every shot is framed symmetrically with characters in the center of the frame, often speaking directly into the camera. This symmetry is thrown out of whack once the children reach Holda’s cottage. Far from the naturalism and historical accuracy of such folk-horrors as Robert Eggers’ The Witch, the production design recalls the offputtingly jagged edges of German expressionism, and the striking costumes owe to the surrealism of Jodorowsky and beyond. The result is a film which feels like an artifact from an imagined past, while at the same time remaining distinctly modern. 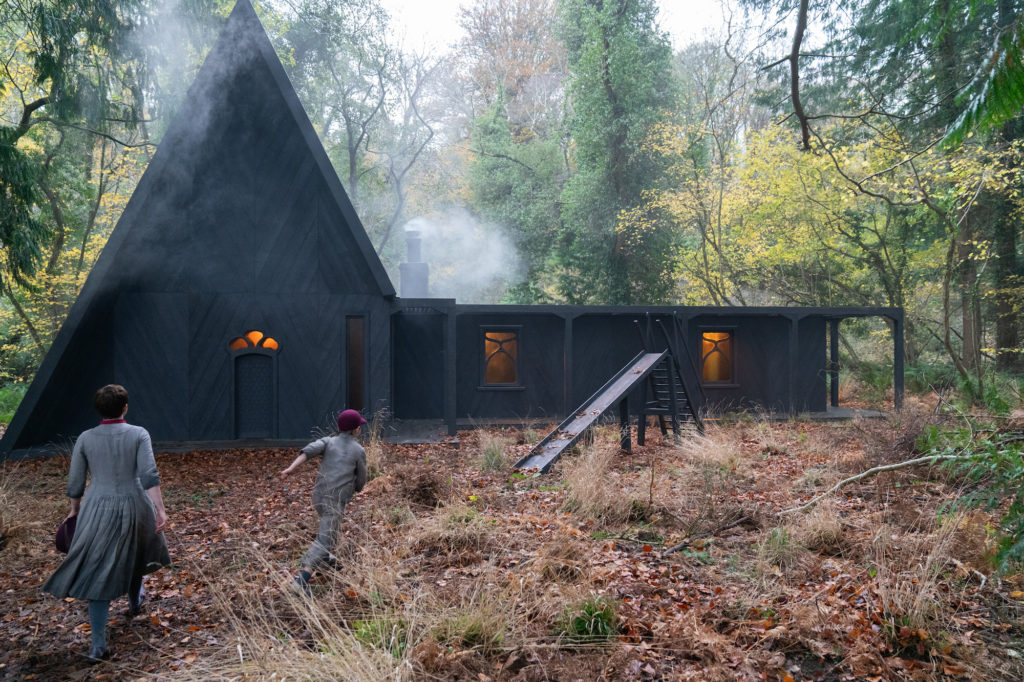 This modern touch extends to the characterizations. While not explicitly anachronistic, Lillis’ plainspoken Gretel feels far less than a century removed from her Beverly Marsh, right down to the pixie cut. While her immediate concerns are rooted in the hardships of the middle ages, her mind is never far from her status as a young woman in a monstrously patriarchal society. Her suspicions are confirmed by Holda, who almost seems unstuck in time in her awareness of proto-feminism (as well as the occasional blatant anachronism– “Another one bites the dust,” she muses as she knocks a milk bottle off the table). That her character never comes off as distractingly fourth-wally is a testament to the pitch-perfect performance by Krige. Like Max Schreck before her, Krige has such a remarkably eerie face (admittedly aided in no small part by costuming and makeup) that it’s difficult to watch her here and imagine her in anything else. In fact, she’s a veteran character actress whose 100+ roles almost certainly include things you’ve seen; she’s probably best known as the Borg Queen in Star Trek: First Contact, though genre fans will remember her truly remarkable starring role in 1981’s Ghost Story. In any event, it’s an instantly iconic role, and will hopefully boost her profile among those who really ought to know her name already.

The same goes double for the director. Even amidst horror’s steady march to mainstream critical and commercial respectability, Osgood Perkins (sometimes credited as Oz) somehow remains under the radar. His first film, The Blackcoat’s Daughter, spent over a year on the shelf following its 2015 TIFF debut before being unceremoniously dumped to VOD by A24 (nevertheless, it managed to make its way onto a number of critics’ year-end lists, including my own). Blackcoat lingered in limbo for so long that its official release was actually preceded by the Netflix debut of Perkins’ second film, the Shirley Jackson-inspired I Am the Pretty Thing that Lives in the House; like so many other releases on that platform, it received decent buzz for about a weekend before being buried under a mountain of algorithms. Sadly, if its early box office is any indication, Gretel & Hansel will probably not be the film that breaks Perkins as a household name (I watched it opening weekend in a literally empty theater at Arclight). But it’s not for lack of trying: blessed with major studio money for the first time, Perkins brings to the material a master stylist’s eye, mixing austere folk-horror visuals with swirling synths and neon colors. In time, I’m confident Perkins’ name will take its place, if not in the pantheon, then at least in the minds of the horror cognoscenti. 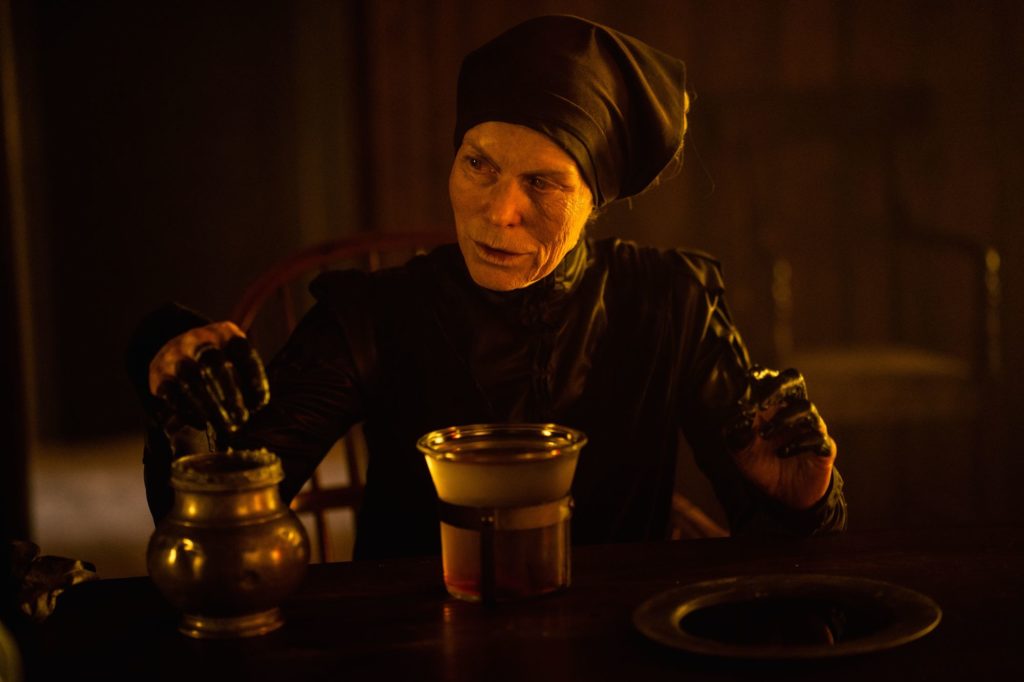 All that being said, Gretel & Hansel is not without its flaws. While I do not doubt that Perkins is earnest in the film’s feminist leanings, he muddles the message somewhat by putting the most radical rhetoric in the mouth of a child-murdering cannibal, and the hints of Gretel’s own witchy tendencies are less clearheaded and cathartic than those of The Witch’s Thomasin. And while the film’s art direction and costume design are mostly stellar, they stumble when Holda takes the form of a generically sexy tattooed goth babe. The effect is disappointingly chintzy, more in line with an Asylum-produced cheapie than elegant art-horror, and a baffling misstep in such a well-crafted film.

But I don’t want to dissuade anyone from seeing this movie while they have the chance. If I may hazard a prediction: inside of two years, Gretel & Hansel will be a beloved touchstone, if not on the level of nu-horror consensus classics like Get Out or Hereditary, then at least on par with such cult streamers as Terrifier or Mandy. Images of Holda and the Girl with the Pink Cap will be ubiquitous on horror Instagram, and the title will turn up pages of custom t-shirts and enamel pins on Etsy. Most of its fans, however, will bemoan the fact that they missed its original theatrical run, blaming an advertising campaign which made it look like just another generic studio b-movie (see also: You’re Next, The Descent). Consider this your invitation to get in on the ground floor. You’ve got nothing to lose– after all, it’s not January anymore.