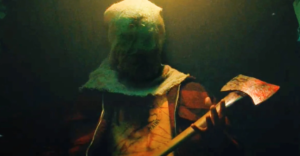 After the bloodbath that was Fear Street Part 1: 1994 (yes, I am still thinking of Kate’s head getting eviscerated in a deli slicer), I didn’t think R.L. Stine’s Fear Street film trilogy could get any crazier. I loved how ballsy it was, and wasn’t expecting it to go any further. After screening the second film, Fear Street Part 2: 1978, I can happily say I was wrong—the second flick in this series of slashers is savagely violent, nostalgic, and viciously fun.

Fear Street Part 2: 1978 opens with Deena (Kiana Madeira) and Josh (Benjamin Flores Jr.) going to C. Berman’s (Gillian Jacobs) house. They’ve brought a possessed Sam (Olivia Welch) with them, and they beg C. Berman—the only survivor of a camp massacre in 1978 that was caused by the witch, Sarah Fier—for help to break the Shadyside curse. Berman reluctantly agrees to assist them. She brings out a journal and old photos, and we are transported back in time to Camp Nightwing, sixteen years earlier.

The film drops us on Camp Nightwing’s most important night of the summer, The Color War. Ziggy is the wild cynic of the sisters, while Cindy is uptight and a rule follower—the two clash over being whether they’ll ever leave the depressing shadow of Shadyside. Ziggy is frequently bullied by Sunnyvale camper Shelia (Chiara Aurelia) and is accused of being a witch. Nick has taken a liking to Ziggy, and the two bond over getting revenge on Shelia and her crew.

When the camp nurse goes berserk and attacks Tommy, saying he will die that night, he begins to hear voices calling his name. Eager to ease his worries, Cindy takes him to the now-vacant nurse station to prove she was hallucinating on narcotics, and that her threat meant nothing. They find a journal on the nurse’s desk, detailing where Sarah Fier’s body may be. Alice and Arnie drag Tommy and Cindy to an abandoned house in the woods and find a satanic altar that is drawn in the journal. Tommy succumbs to Sarah Fier’s possession, and he begins a wild, bloody rampage of slaughter—revealing that he is the axe murderer we see in 1994.

1978 is a nostalgic, gore-drenched summer slasher that feels like it’s trapped in the past, and it’s fantastic. The atmosphere sucks you in, from the pine needle-ridden cabins to the cicadas chirping in the trees. It surpasses 1994 in story, soundtrack (love the bloody final showdown to “Carry On Wayward Son”), and characters. 1978’s characters echo the beloved slashers of the 1980s (notably Friday the 13th, down to Nightwing’s yellow counselor shirts), and unlike 1994, I found myself attached to these characters and getting truly upset when they died.

Sink, as always, is brilliant and relatable, playing Ziggy as the spunky, witty kind of friend you had growing up. Rudd’s Cindy is fantastic, too, and the electric familial chemistry she has with Sink is poignant. I also loved her tangible connection with Tommy and how heartbreaking it was for her to kill him once he’d turned. Ryan Simpkins glowed in their role, as well—their careless attitude tinged with empathy and bravery stood out, and was one of my favorite parts of 1978.

1978 is an exciting slasher that you wish was longer; I want to see more modern horror flicks that can bring back the gritty “camp slasher” vibe of old, like Sleepaway Camp and Friday the 13th. If 1978 was this awesome, I can’t wait to see what’s in store for the last Fear Street film in this enthralling trilogy.

Streaming now on Netflix (the second of a three-part series– watch this space in the coming weeks for our review of the final installment!)