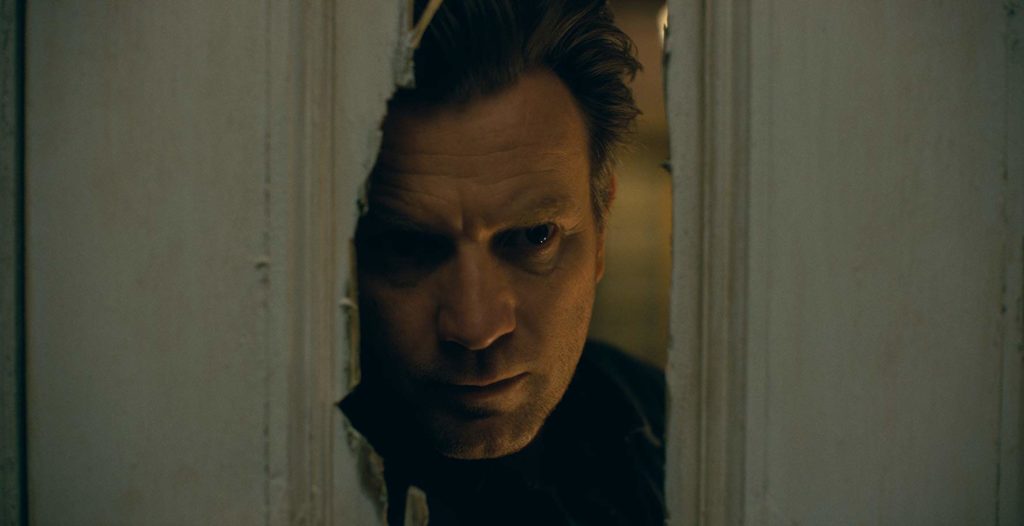 As a horror fan, I’m always a little sheepish to admit my lack of familiarity with Stephen King. Actually, that’s not quite right. I’m more than familiar with the man’s work; I just haven’t read many of his books. King is unusual in modern pop culture in that he effectively has two parallel bodies of work: nearly all of his major works have been adapted for the screen, and many of those adaptations have become at least as culturally important in their own right as their source material. To some, this fact serves as a convenient gateway, but to me it’s something of a block. When I watch a movie before reading the book— especially if I love the movie— I find it difficult to separate the texts, to reconcile character descriptions against the actors who wound up playing them, to overlook (so to speak) elements which were altered from page to screen. The two king books I have read— ‘Salem’s Lot and It— I chose because they had only been adapted imperfectly to television at the time, and therefore were less set in my mind. My perhaps irrational fear has always been that, should I attempt to tackle Misery or Carrie, I would be overly distracted by visions of Kathy Bates and Sissy Spacek.

Nowhere is this divide more daunting for me than The Shining. Few King adaptations— or horror movies, or arguably even movies in general— are burned into the public consciousness as indelibly than Stanley Kubrick’s 1980 Jack Nicholson vehicle, its performances, set pieces, and composition long since absorbed into our collective cinematic lizard brain. King, for his part, is famously disdainful of Kubrick’s film, noting the director’s deviations from the text and fundamentally different take on its characters. So I’ve never read The Shining, and subsequently never read King’s belated 2013 semi-sequel Doctor Sleep. In adapting Doctor Sleep to the screen, however, director Mike Flanagan takes a novel tack to win over semi-literate viewers like myself: by altering the story slightly, and allowing the visuals to follow suit, he has refashioned King’s story into a direct sequel to Kubrick’s. It’s a fascinating gimmick, and when it works, its appeal is undeniable. 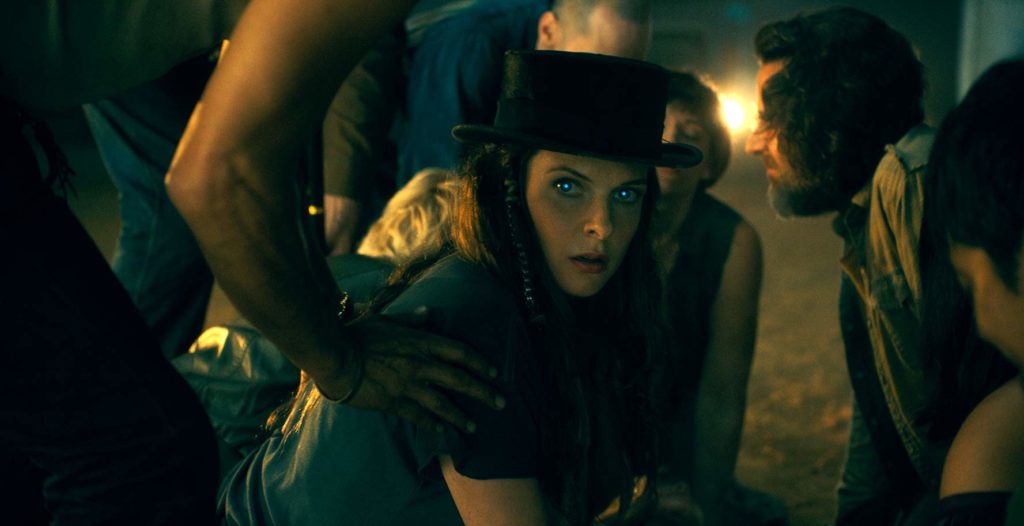 Doctor Sleep catches up with young Danny Torrence (now played by Ewan McGregor) thirty years after suffering the brunt of his father’s writer’s block. He is, quite literally, haunted by his childhood trauma, constantly fighting off ghostly partygoers years after escaping the Overlook Hotel. He is aided in this fight by the kindly, spectral presence of Dick Halloran (Carl Lumbly, uncannily channeling Scatman Crothers), as well as copious amounts of Jack Daniels and cocaine. After finally getting one set of demons under control (encasing each ghost in an ornate box and leaving them in a mental approximation of the Overlook’s hedge maze), he starts to work on the others, moving to rural New Hampshire, enrolling in AA, and taking a job as an orderly in a nursing home. With the help of a seemingly mystical therapy cat— and his telepathic “shine”– Danny develops a knack for comforting patients in their final moments. He also strikes up a psychic “pen pal” relationship with a fellow “shiner” a few towns away, the groaningly named teenage girl Abra Stone (Kyliegh Curran). For the poster child for Kingly terror, life is pretty good for the younger Torrence.

However, not all is well. As implied by the presence of Abra (and Dick), Danny isn’t the only one who shines, and not everyone uses their gifts to mentally sing Sinatra duets with the convalescent. Enter Rose the Hat (Rebecca Ferguson), a sort of witchy, Nicksian earth-mother who travels the country with a caravan of psychic vampires (including the great Carel Struycken, no stranger to mysterious goings-on) seeking out gifted youngsters and either recruiting them or feasting on their life force. Naturally, they set their sights on Abra, whose powers are impressive even among the supernatural. Sensing Rose’s approach, Abra and Danny team up, eventually luring them to Grand Spook Central itself: the long-abandoned Overlook Hotel. 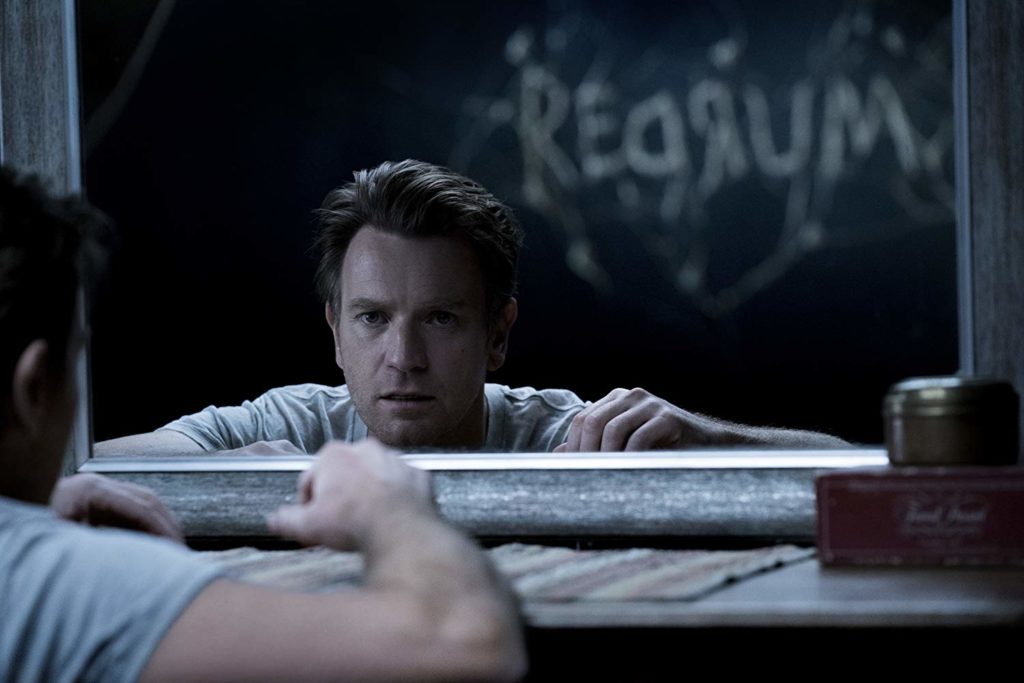 Smartly, the marketing for Doctor Sleep leans heavily on these climactic scenes, and it here where the film truly comes alive. Just as the new Star Wars films conjure sensory nostalgia from reviving the sound design choices of Ben Burtt, Flanagan’s recreations of Kubrick’s masterpiece will hit a nerve for any horror fan. It’s not just that the Overlook’s iconic sets have been painstakingly recreated; the second Danny and Abra start down that snowy drive, Flanagan’s camera begins to match Kubrick’s ethereal glide, and shots are recreated down to the lighting. Eventually, the past begins to literally manifest, and while Flanagan opts against the flavor of the month and recasts the original leads, the result is just as uncannily disorienting (Alex Essoe is convincing enough channeling Shelley Duvall that I almost wish this was a more direct sequel, though Henry Thomas’ Jack is a little Halloween costume-y*). Like the finale of Adam Wingard’s 2016 legacy-quel Blair Witch, these scenes feel a little like boarding a Shining-based amusement park ride, but who doesn’t like a good roller coaster?

If only the film didn’t take quite so long getting to the fireworks factory. Perhaps because of the adaptation’s Frankensteined origins, that mindbending final act doesn’t have a whole lot in common with the two hours (!) that precede it. This material isn’t bad, necessarily; it simply lacks the urgency of the home stretch. As is so often the case with King adaptations, one gets the sense that a good deal of mythology was left on the page. How, for example, do Rose and her friends decide which children do turn, and which to eat? The premise seems to be that each of these characters have different powers, but apart from the protagonists, the only characters we see do anything particularly supernatural (apart from huffing psychic child gas) are Rose and avenging teenage angel Snakebite Andi (Emily Alyn Lind). And really, outside of the character’s name and some of the set pieces, there’s not a whole lot of connective tissue to The Shining; with minimal changes, this could just as easily be a sequel to Scanners, or Dream Warriors, or any other horror-tinged stealth-superhero story. 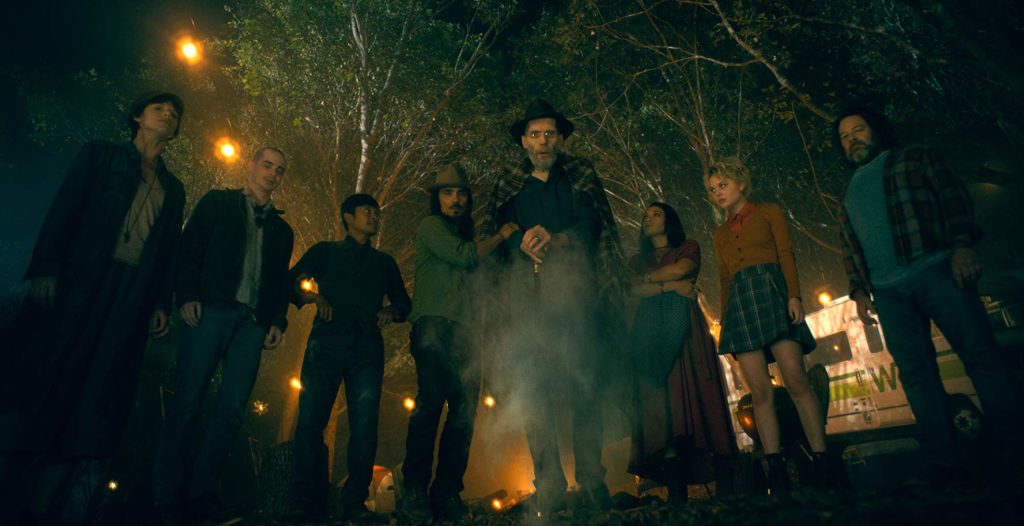 Still, there’s enough here to warrant a watch. Ferguson, in particular, is a magnetic presence; her new-agey bohemianism and lilting accent make her come off as something of a foxy-malevolent version of Touched by an Angel’s Roma Downey, and she tears into each scene with obvious delight. McGregor, for his part, is no stranger to bringing workmanlike chops to questionably necessary follow-ups, and while his version of Danny never quite leaps off the screen, he’s never an unwelcome presence. And Flanagan has, over the past few years, established himself as an up-and-coming horror stylist. I can’t speak to his career as a whole (I still haven’t caught up with his serialization of The Haunting of Hill House, and his Oculus left me a bit cold), but he has an undeniably bold visual sense, all green and black mist and big, spooky houses. There are enough passages prior to the Overlook scenes, as when Rose and Abra astral project into each other’s minds, that pop with a lyrical, dreamlike quality that the film is, if not always gripping, never hard on the eyes. At its best, Doctor Sleep captures an almost irrational childlike wonder, and engages in flights of fancy approaching magical realism.

Which perhaps speaks to the pitfalls of adapting King’s work. Despite their mass appeal, King’s books are often massive tomes filled with deeply weird asides that don’t lend themselves to straight adaptation (I can’t be the only one who wished It Chapter Two leaned into the space-turtle-god of it all). The best King adaptations— like The Shining, loath as King may be to admit it— succeed in their deviations from the letter of the text, while maintaining the author’s maverick spirit. At its best, Doctor Sleep achieves this by merging the distinct visions of Flanagan, Kubrick, and King. At its least successful, it falls into generic plot beats and long, scare-free stretches. Still, there’s enough here to make this worth a watch— or even a read.

*- In researching this review I was surprised to learn that this is the same Henry Thomas best known for playing young Elliott in E.T. I have no idea what to do with this information, but I cannot let it go unmentioned.