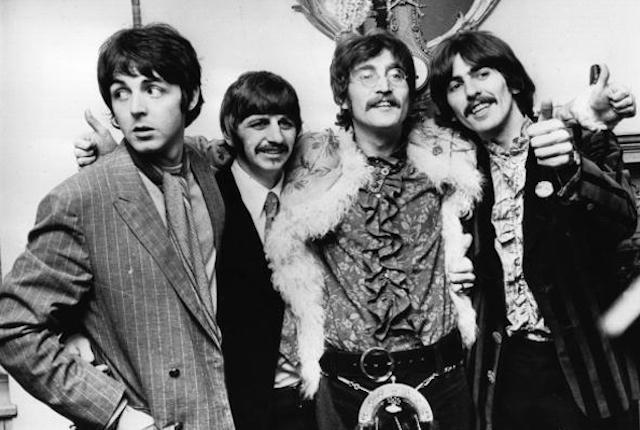 I have loved the Beatles as far back as I can remember, and think that their music was, in fact, art. I appreciated and thrilled to it before I had any other understanding of music or how it was made.  In this regard, I am hardly unique.  To me there is a new challenge in discussing this music, and particularly the album in question, relative to its cultural place.  A consequence of sustained praise and top spots on critical lists has a dulling effect, leaving the cumulative admiration less meaningful.  What superlative ranking takes too much for granted, and most kids tend to intuit, is the almost boundless energy, excitement, and innovation in the music.  The Beatles’ music is also incredibly fun, not only in its energy and execution, but in the infectious sense of discovery embodied by such young and talented artists.

Early in his lecture, Scott Freiman focuses on this aspect of shared culture.  He playfully introduces brief sections of solos from Beatles recordings to quiz his audience.  He’s certainly playing to his audience (and by extension those who wanted to see a recording of the lecture at the Kendall Square Cinema), but he’s quickly illustrating an important facet of the Beatles that criticism often labors over.  The sounds are vibrant, radically different, meticulously crafted and immediately recognizable.  Not everything is equally popular, but plenty of songs are greeted with boisterous shouts and impromptu sing-along.  We realize how distinct the snap of the lead guitar in “I’m Down” is as it chops up the rhythm, the simulated radio distortion envelops the backup vocals in “Lady Madonna,” all of the theatrical sound effects clanging and hissing through “Yellow Submarine.”

Specifically, Freiman highlights how quickly all of this sound developed.  The time between their first single to the beginning of the Sgt. Pepper sessions was a span of not quite five years.  While the artistic and socio-political maturation of that time is mind blowing, Freiman’s approach is one of demystification.  Where Rolling Stone may hail the record as “the most important rock & roll album ever made, an unsurpassed adventure in concept, sound, songwriting, cover art and studio technology by the greatest rock & roll group of all time,” Freiman explores the workaday version.  Even Sgt. Pepper was still the product of a few people making lot of noise.

A simple but instructive device is oft-deployed throughout Freiman’s analysis.  By isolating tracks in the full mix, subtle elements in the sound are highlighted.  Most pleasurable among these are Paul McCartney’s bass lines, which were painstakingly overdubbed, often as the last element of the song.  “With a Little Help from my Friends,” “Lucy in the Sky with Diamonds,” and “Being for the Benefit of Mr. Kite” all benefit greatly from dancing, low-end commentary blended into their fiber.  Also humanizing is Lennon’s insecurity about his lead vocals, which prompted him to lean heavily on reverb and phasing effects, some of which were cobbled together specially for these recordings.  A charming anecdote is revealed about the intimacy of the vocal interplay on “She’s Leaving Home.”  As a child, I used to think of the song as about an imaginary progeny of Lennon and McCartney, which I maintain is not so far off the mark.

Appraisals of guitar and keyboard sounds also trace their genesis.  This also serves a trial-and-error construction narrative, and reinforces what I think is a fundamental appeal of the Beatles.  Cliche though it may have become, the musicians were clearly having as much fun creating this as those consuming it.  That restless inventiveness renders all of this less high-concept monolith (mix pun intended) and more dress-up adventure.  Also noted by Frieman, the whole alternate-band concept is extremely thin and hardly intrinsic to the success of the music.  The vast importance of George Martin’s contribution to later Beatles material is brilliantly described in his blending of violin and viola into the texture of “Within You, Without You.”

So if you already love Sgt. Pepper and feel, as Freiman and I agree, that you can never dig too deep into Beatles minutiae, this is a guaranteed hit.  Beyond that, I definitely think Freiman’s fascination is infectious to a point.  He could certainly be criticized as a bit academic, and this presentation is very much a lecture; visually this is unremarkable, and maybe relies a little too heavily on audience reaction shots.  The analyses of lyrics or motivations are often very literal minded, humorously displayed in a quasi-journalistic sourcing of “A Day in the Life.”  I actually find the downplaying of the role of drug use here refreshing.  Too many rock writers are exceedingly eager to give LSD a writing credit on many of these songs.  A great many people use acid, and very few had a hand in making “Being for the Benefit of Mr. Kite”.  While there’s a great deal of nerdy or niche material here, Freiman’s work ultimately argues that in great art the process is at least as engaging as the product.