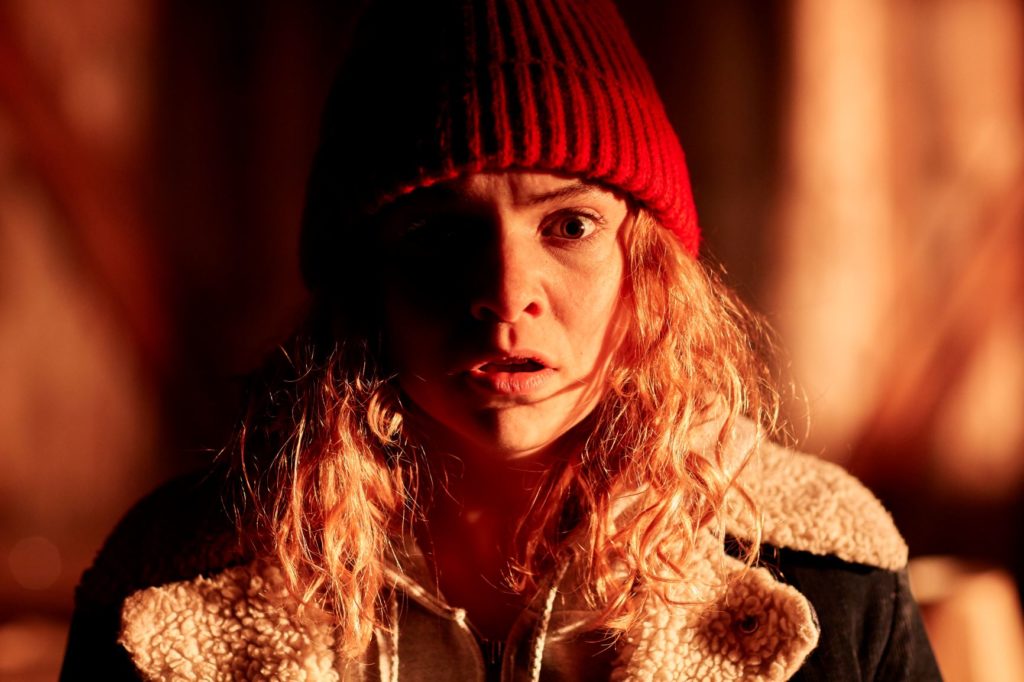 This is a very weird time to be a movie critic.

I know, I know– it’s a weird time to be a human on earth. But it’s especially strange to be a working writer, and to have the industry that you write about abruptly grind to a screeching halt: in less than a week, all movie theaters have closed their doors, all scheduled new releases have been postponed, and even all Hollywood sets have ceased operations. If you’ve been reading the Hassle for the past few days, you’ll know that we’ve temporarily swapped out our regular coverage of local repertory screenings with Cinema Quarantino, our daily streaming guide for the starving cineaste. But critical reviews keep the senses sharp, and with all my scheduled press screenings and festival coverage suddenly pushed to the back burner, this critic has started feeling a little… wiggy.

So imagine the feelings that washed over me when, in the email announcing the cancellation of Monday’s advance screening of the New England neo-noir Blow the Man Down at the Brattle, it was mentioned that screeners were available, and that the film, as a direct-to-Amazon original, was still being released as planned. Reader, I almost wept. Life, uh, finds a way.

Blow the Man Down concerns the goings-on in Easter Cove, Maine, the kind of remote, tightly-knit small town in which social distancing is simultaneously necessary and utterly impossible. Following the death of their mother, Mary Margaret, the Connolly sisters are at loose ends. Responsible older sister Priscilla (Sophie Lowe) is desperately trying to keep the family fish shop well enough above water to keep the house, while rebellious Mary Beth (Morgan Saylor) is itching to tie up as many loose ends as it takes to leave Easter Cove and enroll in college. With the funeral over and her bags packed, Mary Beth shares a drink at the local watering hole with a rakish townie scuzzbag named Gorski (Ebon Moss-Bachrach). Riding home in his beat-up sedan, Mary Beth starts to feel uneasy when she spots a pistol in Gorski’s glove compartment; her suspicions are confirmed when she goes to fetch the spare tire and finds a matt of bloody hair in his trunk. The situation escalates quickly, and, in a moment of desperation, Mary Beth dispatches her assailant with a handy harpoon gun. The Connolly sisters attempt to cover up the incident, but soon find themselves drawn into a web of small-town intrigue, involving the tough-as-nails madam of a bed-and-bordello (Margo Martindale), fresh-faces rookie cop Brennan (Will Brittain), and an ever-watchful trio of local biddies (Annette O’Toole, Marceline Hugot, and June Squibb) who secretly run Easter Cove. 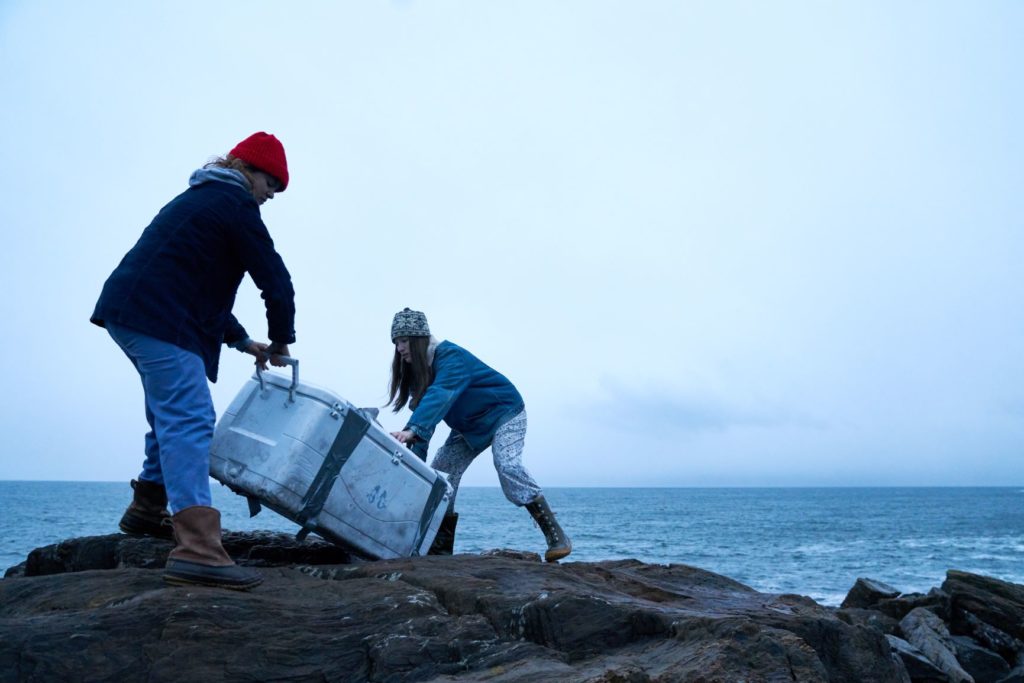 As a lifelong New Englander, the thing that struck me most immediately about Blow the Man Down is its sense of place. If you’ve spent any amount of time in a go-nowhere town in the region (as I suspect a plurality of Hassle readers have), Easter Cove will be instantly recognizable: the local oddballs, the dusty shops you visit daily by necessity, the skies that somehow remain grey on even the sunniest summer days. Directors Danielle Krudy and Bridget Savage Cole (the latter a Beverly native, and it shows) perfectly capture the odd bits of lore which loom large in the collective psyche of small-town natives yet remain incomprehensible to outsiders, as when Mary Margaret’s friends recall the infamous time she showed up to a wedding wearing her LL Bean waders. It’s the sort of town that’s either the only place you can ever imagine living or a fate worse than death, depending on your disposition.

This sense of all-too-realness informs the lean intensity of the story. Neo-noir– particularly small-town neo-noir– walks a fine line between all-encompassing grimness and quirk for quirk’s sake. Blow the Man Down manages to strike an appealing balance; its humor never threatens to undercut the stakes, nor does the tightening snare of circumstances overcome and devour its moments of levity (comparatively speaking, it’s a couple shades darker than Fargo, but lighter than Blood on Her Name). Nowhere is this dichotomy clearer than in Margo Martindale’s performance as Enid. In lesser hands, Enid could have been pure caricature, the unassuming dowdy matriarch running a brothel out of her quaint bed-and-breakfast. But Enid is a fascinatingly complex character. Her pleasant exterior masks a terrifyingly canny criminal queenpin capable of shocking cruelty, which, in turn, serves as a shell for moments of unmistakable humanity and loneliness. To her girls, Enid is a nightmare; to her “friends,” she’s a thorn in the town’s side (her business is something of an increasingly open secret); in her own mind, she’s simply a big fish doing what she needs to survive in a small pond. 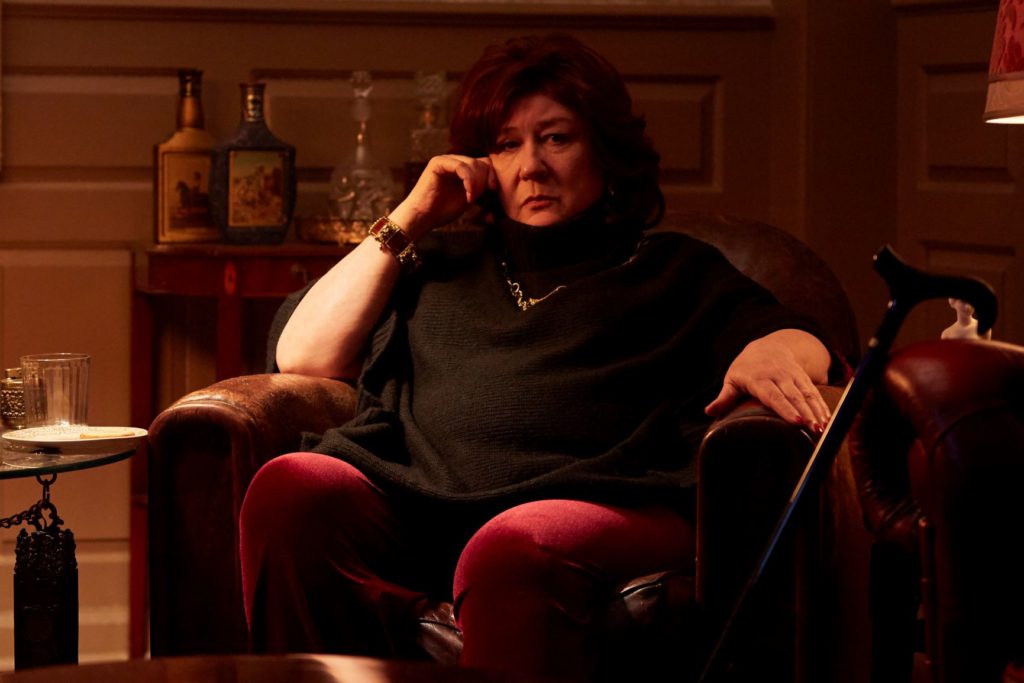 And, of course, to the Connolly sisters, she’s an unsolvable problem. At its heart, Blow the Man Down is a classic noir story, following its protagonists from one initial mistake through a series of increasingly poor choices. But where the films noir of the 1940s usually followed a hard-living, down-on-his-luck everyman, Blow the Man Down breathes life into the formula by applying its tropes to the sisterly bond between two young women. Mary Beth and Priss are immensely relatable in their flaws and refusal to fall into tidy boxes. Mary Beth is only the “bad girl” in her dissatisfaction with her uninspiring surroundings, while one gets the feeling that Priss is only “the responsible one” because circumstances have thrust the role upon her. Of course the Connollys can’t keep their worsening situation under control– they barely have a handle on their lot in life as it is– but you still root for them to succeed, because, damn it, they deserve a break.

There are times when Blow the Man Down loses focus a bit on the plot; for a 90-minute film about a small town, it’s a little overstuffed with characters, to the point that it occasionally can’t seem to decide who its protagonists are (even the Connolly sisters disappear for long stretches in favor of Officer Brennan, or the town matriarchs, or hard-luck prostitute Alexis). And occasional stylistic flourishes, such as the lengthy periodic interludes in which lobster fishermen sing sea shanties on the rocks, feel showy and out of place. But I don’t want to undercut what a joy it was to be able to watch this film at a moment when I’d resigned myself to not seeing any new movies for a month at least. Blow the Man Down is an engagingly twisty-turny New England yarn filled with smart dialog and a cast of winningly offbeat characters. It would be a treat of a film even in the best of times; at this moment, it feels like a true gift.