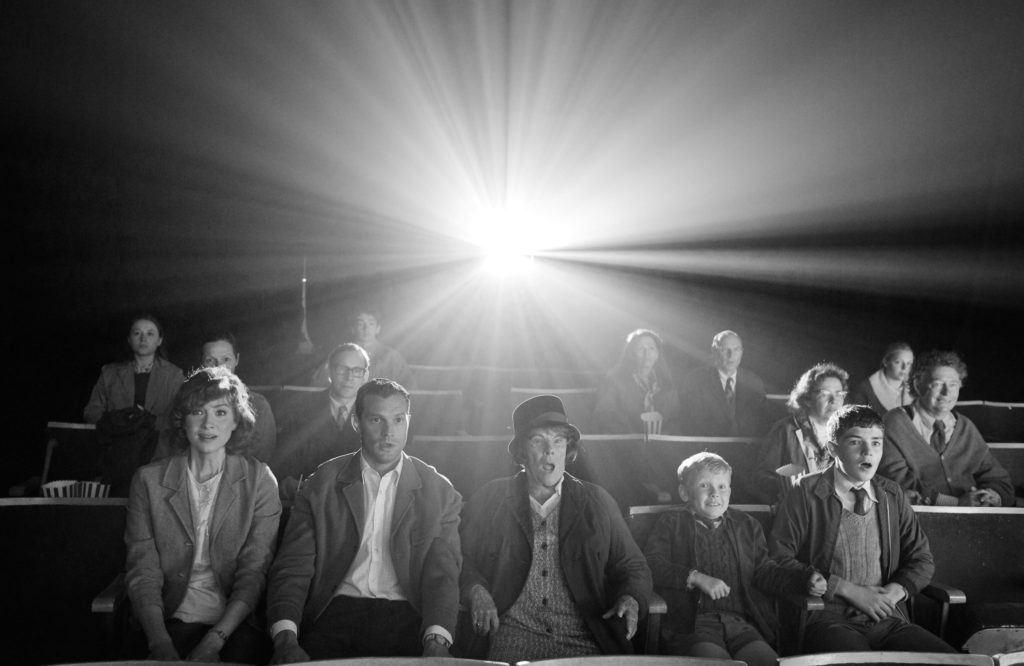 When one asks, “What ever happened to Kenneth Branagh?” the question is mostly rhetorical. After all, the man’s been busy, directing blockbusters like the live-action Cinderella and the first Thor film, and acting in such high-profile features as Dunkirk and Tenet. The question, then, is more of a “What happened to Kenneth Branagh?” When Branagh burst onto the scene in the ‘90s as an innovative actor-director of stage and screen, he garnered a lot of “next Olivier” buzz (thanks in no small part to his signature achievement, the 4-hour 1996 adaptation of Hamlet). Branagh’s latter day work has been hugely successful and generally liked well enough, but it’s probably been some time since anyone made that particular comparison. Somewhere along the way, Branagh seems to have crossed the line from daring auteur to studio workhorse, and while there’s nothing necessarily wrong with that, one could be forgiven for missing the old, young Branagh.

If Belfast is any indication, those numbers would seem to include Branagh himself. After years in the anonymous work-for-hire wasteland, Belfast is as personal a film as they come, the clearly autobiographical story of a young boy coming of age in Northern Ireland in the turbulent late 1960s. It’s a refreshing return to form– or, perhaps, the donning of a new form altogether.

Belfast centers on Buddy (Jude Hill), a nine-year-old Protestant boy growing up in a heavily Catholic neighborhood in the title city. The Troubles, of course, serve as a constant undercurrent– the film is bookended by violent riots, and Protestant rabble-rousers skulk around the periphery– but Buddy only retains a child’s piecemeal understanding of them. His father (Jamie Dornan) is an itinerant worker, out of town for weeks on end on one job or another, leaving Buddy and his brother to be raised by his long-suffering mother (Caitríona Balfe), his kindly grandparents (Judi Dench and Ciarán Hinds), and his smart-talking cousin Frances (Freya Yates). Buddy’s world doesn’t extend far past the barricades protecting his block from partisan violence, and he’s happy that way; his family is largely apolitical and get along with their Catholic neighbors, and he’s already got a future mapped out with the cute girl at the head of the class (unbeknownst to her, of course). But as the realities of living in the epicenter of a functional war zone bear down, Buddy’s family must consider setting out for parts unknown.

Belfast belongs to the same strain of sparkling cinema-as-memoir as Amarcord and Roma. Like the small towns in those films, Branagh’s Belfast is amplified by virtue of his protagonist’s childlike perspective: Buddy’s neighborhood, which appears to span a single city block, towers like a fortress, and simple childhood escapades like working with his grandfather to goose his grades up or conspiring with his cousins to steal a candy bar from the local confectioner take on operatic proportions. Branagh is aided immeasurably in this regard by young Jude Hill, who is clearly the great discovery of this film. There is a tendency to judge “great” child actors on their maturity, old souls like Haley Joel Osment or young Jodie Foster turning in haunted, soulful performances. Hill does the opposite, projecting a presence so wide-eyed and guileless that he’s nearly impossible not to love. It’s a classical child performance in the Jackie Coogan vein, which stares down your 2021 cynicism and dares you not to smile. 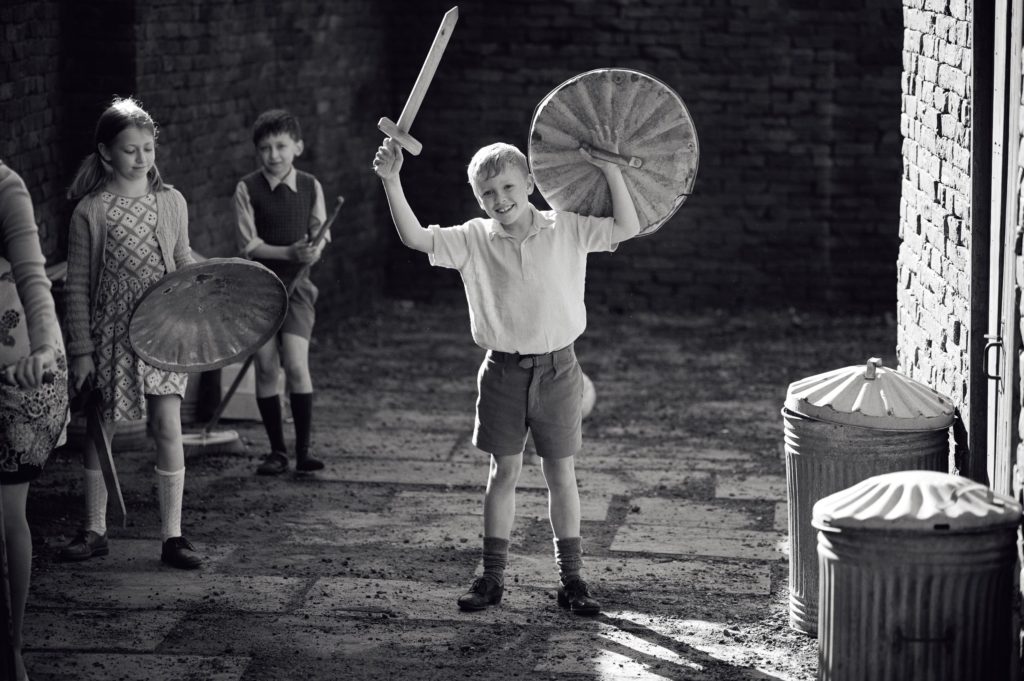 If Hill’s performance is your gateway into the world of Belfast, then the look of the film is what plants you in his head. Again like Roma, Branagh and cinematographer Haris Zambarloukos render their world in high-contrast black and white, which simultaneously heightens the reality and grounds it in history. The effect is somewhat like thumbing through a box of old documentary photographs; even the members of the cast who are world-famous movie stars come off looking like found-object models for Diane Arbus. Branagh strategically deploys bursts of color here and there, but the film pops even without them. It perhaps says something about the digitally-graded sludge of most modern blockbusters that a black-and-white film comes off as more “colorful” than just about any coming out of the studio system.

All that being said, those looking for an epic befitting this turbulent time and place may be disappointed. There are sad moments, to be sure, and the riot scenes capture the untenable chaos of the Troubles, but on the whole I was surprised at how low-key Belfast was. This is not, after all, the story of Belfast per se, but of young Kenneth Branagh’s experience as a child there. While the political turmoil plays as a backbeat and lends the proceedings a sense of uncertainty, this is ultimately a coming-of-age story– and, more to the point, a Kenneth Branagh origin story. Tellingly, the moments in which the film springs into living color mostly come at the cinema (where Buddy takes in such Technicolor spectacles as Chitty Chitty Bang Bang and One Million Years B.C.) and at a stage production of A Christmas Carol (there is also a hardy-har moment in which Buddy reads a Marvel comic featuring a certain Norse deity). At home, Buddy watches old westerns like High Noon and The Man Who Shot Liberty Valance on TV, which in turn shape the way in which Buddy views the conflicts surrounding him– and in which Branagh the adult now stages them. In a very real way, Belfast could have been titled The Young Kenneth Branagh Chronicles, but I suppose that’s harder to fit on a marquee.

Belfast is, in essence, an old-fashioned film, a throwback to the wholesome studio programmers which drew families into the cinemas in the 1930s and 1940s. This, again, is perhaps something of a double-edged sword; like those older films, it lacks some of the complexity that one might hope for from what is widely considered the presumptive Best Picture frontrunner. But, also like those films, it evokes such a sense of cozy wonder that it’s difficult to fully hold it against it. This is, quite simply, a Nice Little Film, about a nice little boy and his (mostly) nice little family living in a not-so-nice little town. It’s the most interesting film Branagh has made in ages, and even if it isn’t an instant classic, it’s a movie you can comfortably take your whole family to see over Thanksgiving with a minimum of complaints. When a capital-A Auteur signs on to helm a generic blockbuster or the latest installment in a studio mega-franchise, the implicit promise is that they will use that paycheck to finance their next few passion projects– a promise which has largely gone depressingly unfulfilled in more and more cases. With Belfast, Branagh has finally made good; hopefully, more former next-big-things will follow suit.