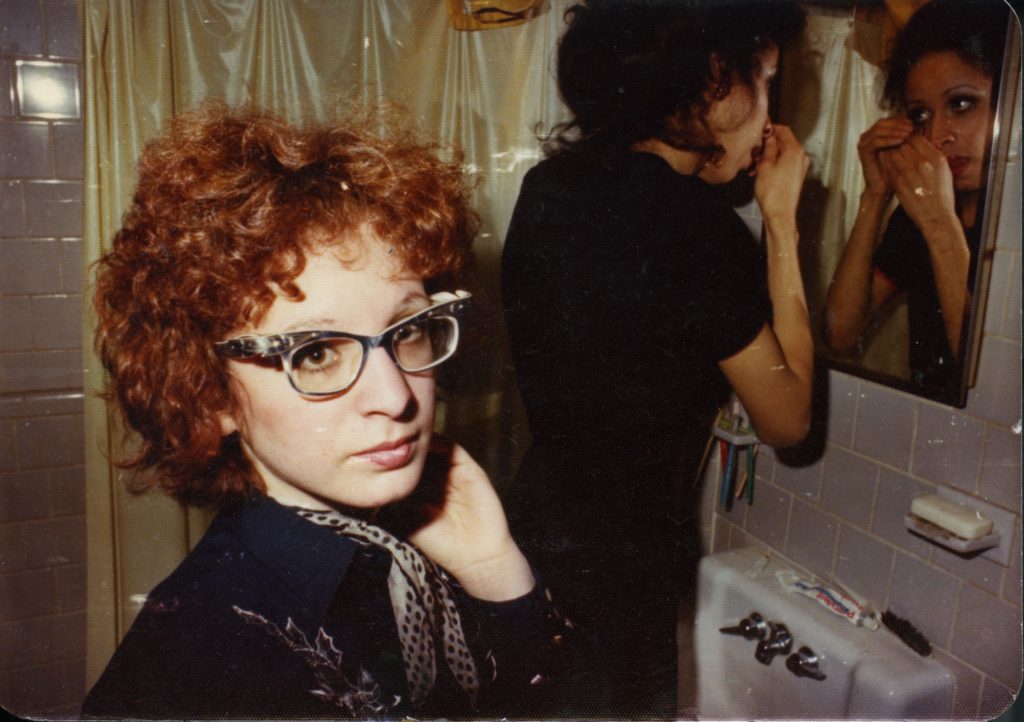 There is a scene early in All the Beauty and the Bloodshed, Laura Poitras’ electric new documentary about artist Nan Goldin… actually, that’s not quite right. Let me start again.

Make no mistake: All the Beauty and the Bloodshed is centered on Goldin, the photographer and activist who was, by any metric, one of the most important American artists of the 1980s. But to say that a film is “about” an artist conjures a very specific set of expectations of a biographical exploration of their work. We get all of that in All the Beauty, and in spades; Goldin is very open about her life, and her most famous work– Polaroids and slideshows documenting the underground New York spheres through which she traveled– is a direct extension of that openness. But rather than simply focusing on the woman behind the art, Poitras assumes Goldin’s point of view, directing her camera outward instead of inward, toward the wide-ranging objects of Goldin’s fire: the AIDS crisis, psychosexual abuse and trauma, and, most pointedly, the ongoing opioid epidemic and the superpowers responsible. It is a film starring Nan Goldin, but it is about the world around her that makes her art what it is.

Anyway. There is a scene early in All the Beauty and the Bloodshed in which Goldin watches a slideshow of her work, pensively vaping as her life literally flashes before her eyes. “It’s easy to make your life into stories,” she muses. “It’s harder to sustain real memories.” Goldin’s work– snapshots in bleeding color or eye-popping black and white– comes closer than most still photography to embodying actual, living memories; it often seems like Goldin had a camera installed directly in her head. But it also tells stories, often as vividly as any movie, with countless intersecting narratives. One gets the sense that Goldin (who essentially serves as onscreen narrator) has dedicated her life to sorting through them.

Of course, the main throughline in All the Beauty is not Goldin’s photography, but rather her current passion: the complete and utter obliteration of the Sackler family, whose name adorns countless fine art galleries around the world, but is now stained by the family’s association with the devastatingly addictive painkiller Oxycontin. Goldin is more qualified than almost anyone to speak to the opioid epidemic– she nearly died of an overdose after being prescribed Oxy for a sprained wrist– and she’s also more equipped than most to battle it: with her activist group P.A.I.N. (Prescription Addiction Intervention Now), she stages protests and die-ins in the Sackler wings of various museums, specifically targeting institutions in which her own work is part of the permanent collection. She may be working in a different medium, but the intensity– and efficacy– of Goldin’s protest work is certainly of a piece with her photography.

Describing All the Beauty and the Bloodshed succinctly presents a challenge, because it is “about” so much: Goldin, her late sister (who gave Nan her first glimpse of rebellion before her suicide at age 18), the Sacklers, opioids, AIDS, the lost, queer New York of the 1980s, and art– both the drive behind its creation and the culture surrounding its exhibition. Yet Poitras does a remarkable job presenting this sprawling story in a way that never feels muddled or unfocused; the various threads and personalities remain clear throughout, and all clearly belong to a cohesive whole. The key, of course, is Goldin herself, a flinty, fiercely articulate tour guide through her own history (she also played no small role in the film’s construction, assembling the slideshows which serve to illustrate her story, as well as supervising the immaculately tasteful soundtrack). Like her artwork, Goldin commands your attention, and it’s as difficult to stop listening to her as it is to look away from her pictures.

Yet for all the intensity of both its subject and her story, All the Beauty is rarely oppressive. Much of that has to do with the spotlight Goldin casts on the support system in which she came into her own, first in Provincetown, then in the vibrant New York of the late ‘70s and early ‘80s. “I only escaped because of my friends,” Goldin recalls of the period in which she broke free from her chaotic home life, and she sketches vivid portraits of her profound friendships with such notables as David Wojnarovicz and actress/writer Cookie Mueller (best known for her memorable roles in John Waters’ early films) and of the amazing queer spaces she inhabited. Most of these, of course, are now gone– the people largely to AIDS, the places to gentrification and urban renewal– but Goldin has afforded them immortality, both through her work and, now, through her words.

To call a documentary “important” has come to smack of faint praise; such films are frequently disposable, cast aside as soon as awards season is over (when was the last time you revisited Fahrenheit 9/11?). But All the Beauty and the Bloodshed well and truly fits the bill, simultaneously timely and timeless in the issues it confronts. Nan Goldin has been producing unforgettable work for nearly half a century, and this film serves as both a spotlight and a bullhorn for an artist whose work is clearly nowhere close to done. God willing, the Sacklers’ days of power in the art and pharmaceutical worlds are numbered, but there will be others– there are always others, monstrous hypocrites masking their brutishness with genteel respectability. Through her activism, Nan Goldin shows that these titans are far from infallible, and can be toppled through persistence and– yes– art.