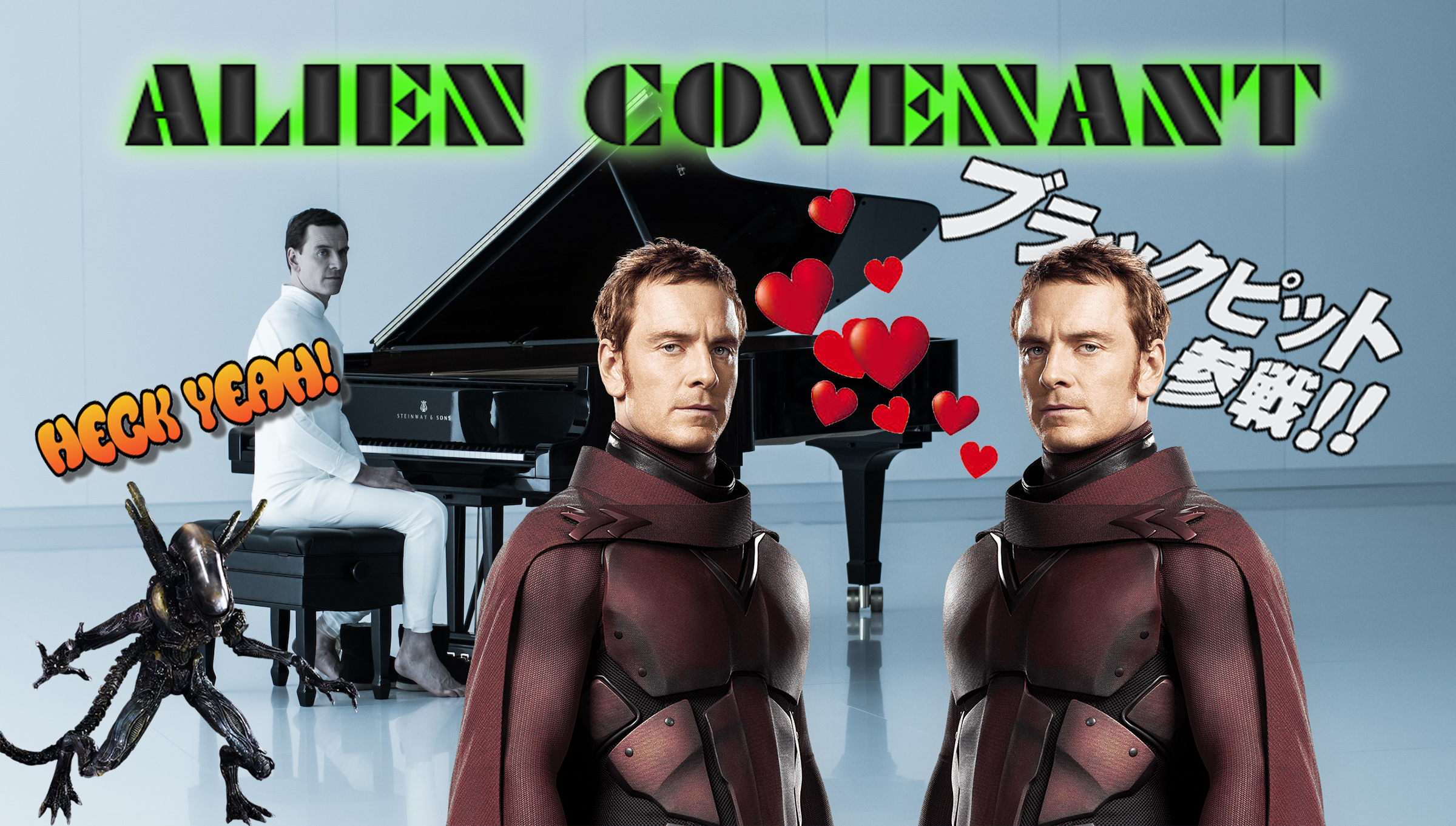 In 2012, Ridley Scott — in collaboration with Damon Lindelof — released a prequel to his treasured 1979 masterpiece, Alien. Brazenly titled Prometheus, the film sent the ‘Alien fandom’ into a tizzy. They felt the movie ruined the mystique of the original whilst simultaneously being a general mess of strange mythology. Also, to put it lightly, Prometheus is literally nothing like Alien. Also-also, it told audiences that humans were created by giant weirdos, called Engineers, who just wanted us to die. (Important note: They looked like Handsome Squidward). 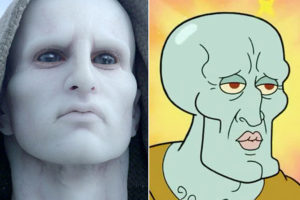 Prometheus came out nearly four decades after Scott’s subtext-laden, psycho-sexual monster movie, and it’s clear he had way different shit on his mind. Moving past Alien’s focus on how procreation and birth can be a deadly, violent processes, he is instead wondering about the genesis of all things, humankind’s larger purpose amongst an infinite cosmos — if any — and what it means to be a human. You know, stuff that’s real hard to talk about without sounding like an idiot.

For all its flaws, I personally think Prometheus fucking rules. Thus it pleases me to report that while Alien: Covenant is a ‘return to form’ of sorts for the series, it doesn’t entirely drop the questions and ideas seeded in Prometheus. In practice, Covenant serves as both an intriguing footnote to Prometheus and as a modernized retread of Alien. By weaving together these two tonally disparate sources, Ridley Scott has created a homunculus of a blockbuster. Riveting. Strange. Homoerotic. Violent. Nihilistic… Simply put, there are not many other movies like this one. For better or worse. 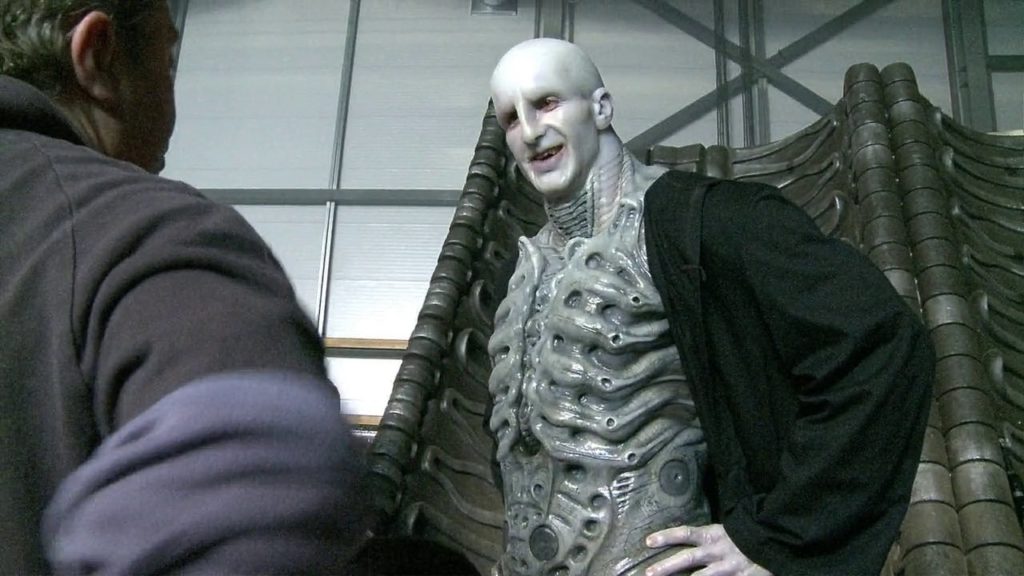 An Engineer between takes.

Opening with a shot cribbed from his own Blade Runner, the movie quickly delves back into Scott’s new obsessions. We’re treated to a flashback to the birth of Michael Fassbender’s android character, David, and his first conversation with creator Peter Weyland. (This flashback thankfully allows Guy Pearce to play the role of Weyland without a slathering of bad make-up on his face, à la Prometheus). The two share a dialogue on existence and makers. Then David sits at a piano and, of his own volition, begins to play Wagner’s Entry of the Gods into Valhalla. Perhaps a little on the nose — a lot of this movie is — but it’s a fun motif. Besides, Scott is able to balance out all the Byron, Shelly, and Wagner references scattered throughout with an extended riff on John Denver.

After this, the movie introduces its new crew of characters and new spaceship. Here’s where most of my problems with the movie begin. While this is a decent cast of characters, they’re really no different from other characters we’ve seen before — and the set-up is so familiar at this point you can feel that even Scott feels perfunctory about it. All in all, the set-up is fine. It’s much better paced and realized than ninety percent of current blockbusters, but Scott has the burden of expectation here and you can’t help but feel a little impatient at times.

NOTE: I’M GOING TO GET INTO A BUNCH OF SPOILER STUFF FROM HERE ON, SO AVERT YOUR EYES IF YOU HAVEN’T SEEN THE MOVIE YET AND DON’T WANNA BE SPOILED.

The crew lands on the planet David and Shaw were headed to at the end of Prometheus, then things kick into high gear. Two of the crew members are infected with ‘Xenomorph-spores’ and Scott really slams down his fucking boot. Viscera flows freely. Floors become covered in gore. Horrific, pale Xenomorph creatures (the Neomorph, I’m told) burst from spines and screech like monkeys as they pound their eyeless heads against glass and tear into flesh.

It’s exhaustively nightmarish, and at the end of the sequence the movie makes its turn into the truly strange. Like, unbelievably bizarre. Bar none, it momentarily becomes one of the most idiosyncratic 100 million dollar movies ever made. David shows up. He stands solitary in a field, his hair long and his face obscured by a cloak that looks like something Legolas would wear. “Follow me,” he demands, turning away and running off into dense forest. (I’m not making this up!)

The crew follows David and he leads them to a vast plateau of horrific statues, reaching out in agony. We learn this whole area is David’s creation. David and Shaw came here to meet their creators but David brought destruction upon them. In a flashback sequence we see him descend from the Heavens and summon a black cloud of biological warfare upon his creator’s creators. These Titans choke on the Xenomorph’s base ingredient and become cemented in time as David looks on with a confounding mixture of satisfaction and sadness. Though the real world comparison would be the victims of Pompeii, visually Scott seems more inclined to draw parallels to the art of Hieronymus Bosch.

David leads the crew through his nightmare vision down into a dungeon where he has spent the last decade experimenting with the Xenomorph’s genetic goo, creating strange creatures and filling notebooks upon notebook with pages of horrific drawings. Between films David has transcended his role as Frankenstein’s monster and is now Dr. Frankenstein himself. His curiosity has turned to madness and he has spent every day since his arrival pondering his capability for creation and love. Here it comes into focus that the overarching story of this prequel series is of David’s drive for understanding, for perfection. And of course he eventually does learn to create the perfect being…

We are made to understand David’s desires most clearly in his relationship with Walter.

It’s great stuff. Truly homoerotic in a way almost zero other blockbusters are. Lots has been said already about the blink-and-you’ll-miss-it gay couple in Covenant. But this is way better. It also can’t be stressed enough just how fucking great Fassbender is in this role. He absolutely kills it.

Unfortunately the third act is mostly just an updated version of the original Alien but devoid of the psycho-sexual subtext. While it is fun to see a Xenomorph move fluidly in all its frenetic glory, the mystique of the original production is missed. It feels as though Scott is tired of spaceship with alien inside narrative as well, as this part of the movie feels much more phoned in visually than the rest of the movie. There’s also a ‘twist’ at the end that was telegraphed so fucking clearly it was less surprising than it was a bit of a narrative nuisance.

But despite what I found lacking, what I loved I just loved so much. That being said, if you didn’t like Prometheus you probably won’t like the parts of the movie I just raved about. Luckily for you, there’s a big CG Xenomorph to gawk at this time around. (Though honestly, the CG is weirdly lacking).